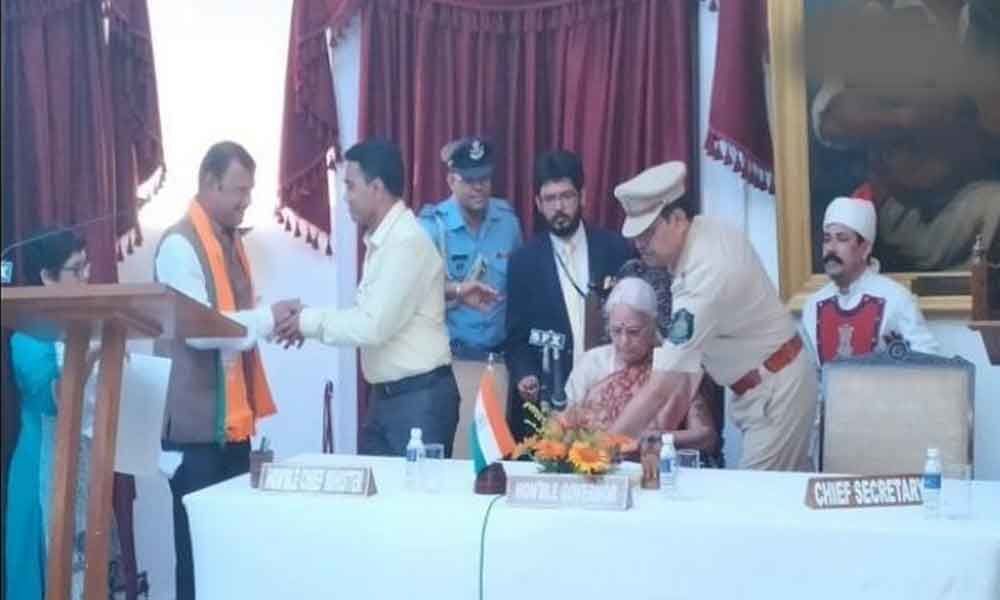 Panaji: Sanvordem MLA, Prabhu Pauskar was inducted into the Council of Ministers at a ceremony held at Durbar Hall Donapaula here on Thursday.

Governor Sinha administered the oath of office and secrecy to Pauskar. Chief Secretary Parimal Rai read out the order of appointment.

Pauskar after taking oath as Goa cabinet minister told ANI, "I feel good to be a part of the BJP. Modi ji should become the Prime Minister again. We will put in all the efforts to make our two MPs from Goa win Lok Sabha elections and send them to Delhi."

The support of the MGP was crucial for the stability of BJP-led dispensation in Goa. The merger of the two-member legislative unit into the BJP brings the saffron party on par with the Congress with 14 seats each. The MGP is an alliance partner of the BJP in Goa since 2012.

The MGP has three lawmakers in the 40-Member Goa Assembly and its senior leader and Marcaim legislator Sudin Dhavalikar is the deputy chief minister in the BJP-led Pramod Sawant government in Goa.

As two out of the three MLAs have merged the legislative wing, they are saved from inviting anti-defection law, which makes it mandatory that two-thirds of the strength should agree for the merger.

The legislators broke away from the MGP and formed a group, MGP (two) on Tuesday. They have now merged the legislative unit with the BJP.

Sawant had won the floor test in the state Assembly after 20 MLAs including 11 from BJP and three each from MGP, Goa Forward Party (GFP) and Independents voted in his favour.