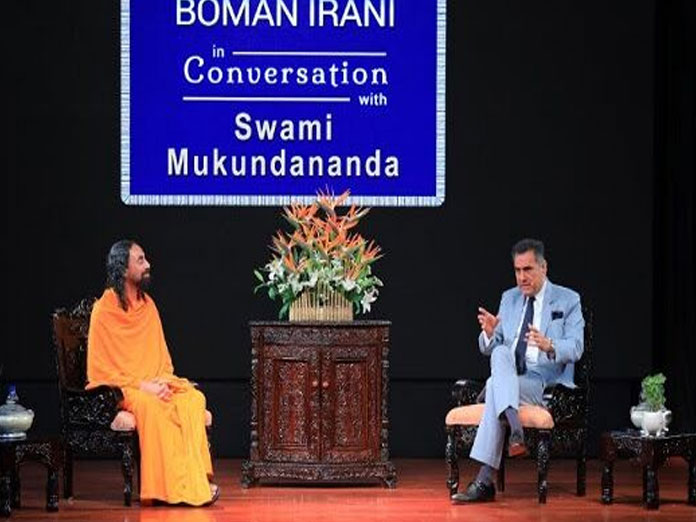 Equipping college students with the tools for success in life is more than mastering sciences and engineering To add the missing ingredients, New Horizon College of Engineering in Bangalore is exposing students to another important technology On February 19, the university hosted Bollywood actor Boman Irani and Swami Mukundananda, an international authority on mind management With the goal of i

Bengaluru:Equipping college students with the tools for success in life is more than mastering sciences and engineering. To add the missing ingredients, New Horizon College of Engineering in Bangalore is exposing students to another important technology. On February 19, the university hosted Bollywood actor Boman Irani and Swami Mukundananda, an international authority on mind management. With the goal of inspiring and empowering youth for success in life, they both talked about attaining happiness.

“Happiness just doesn’t happen to you by accident or a stroke of luck. It is a choice that will make or break your future. This is why I feel it is important to have a serious public discussion about it, especially with our youth”, said Irani while sharing his life experiences and how his mindset shaped his future.

Both personalities encouraged students to take the #HappinessChallenge, a 21-day free online introspective program challenging the students to take their happiness to the next level. According to Swamiji, the challenge has rapidly spread worldwide from schools, corporations, health professionals and institutions and individuals and families in numerous countries and continents. Thousands of people continue to sign up for #Happiness Challenge around the world.

Swami Mukundananda began the Bangalore programme by outlining a simple step by step approach to achieving success and happiness. “The mind plays a powerful role in our destiny and can help us achieve to our maximum potential. Having the right tools to manage the mind is key to success,” he explained.

JKYog, the non-profit founded by Swami Mukundananda, presented the JKYog Inspiring Leadership Award to Boman Irani during the programme in recognition of his positive example of overcoming challenges in life and his efforts to inspire others to achieve happiness. “I am honoured not only to be recognised for my efforts and achievements but to have been able to meet Swami Mukundananda who clearly has a tremendous depth of knowledge”, said Irani.

The JKYog Inspiring Leadership Award recognises highly influential leaders who motivate people to excel, uplift and inspire them to cultivate positive mindsets in life and holistic healthy well-being often by their own example of overcoming extreme adversities. The recipient’s life or work must demonstrate that it has had a positive impact on individuals and society.

Irani’s father died before he was born. As a child, Boman Irani battled with dyslexia, ADHD and had a lisp. However, he didn’t let his challenges hold him back. His first job was of a waiter. Also until his early 30’s, he worked in his family’s farsan making shop, and it wasn’t till then that he decided to pursue photography. He had an interest in movies and his mother encouraged him to go to movies daily to observe the cinematography and the art of filmmaking and acting. He overcame extreme challenges and he eventually became not just an actor but quite an accomplished superstar with over 80 movies in less than 20 years under his belt.

“I have chosen to speak openly about the challenges that I’ve faced in life and how I came to grips with them intentionally to inspire others especially young people that they too can overcome whatever obstacles they face and find success and happiness in life,” noted Irani. “It was a change in my state of mind that was the impetus for a breakthrough in my life. The mindset is critical.”

The conversations with New Horizon College students centred on the important role 7 mindsets, identified by Swami Mukundananda as critical, play in success in any aspect of life. Swamiji described the first 2 mindsets as positivity and taking responsibility for one’s emotions. “Often we make a habit of blaming others for the failures and calamities in our life and we can remain stuck in negativity. Changing this dynamic is essential,” he explained.

Irani shared how time and time again when faced with what seemed like an insurmountable obstacle, he didn’t let it bring him down. In hindsight, he pointed out to the students, that if it had, he clearly would have been in a different place today. However, Irani inside himself was compelled to overcome the inertia of negativity that clouded his life. He started his climb up the ladder from the bottom. “Despite being ridiculed in my youth, instead of letting it get me down, I focused on the only thing I could change which was myself,” said Irani. If it was lack of knowledge, he studied and he practiced and he did not give up.

“Inspiration is a springboard to reaching our highest potential. Without inspiration we cannot overcome the obstacles that cross our path”, explained Swamiji. He gave the example of Soichiro Honda and the calamities that continually held him back yet he never gave up on his quest till he launched the manufacturing of motorcycles and then eventually automobiles. In Swamiji’s life, it was the inspiration that made him take a different course all together from the corporate world. As a graduate of both IIT and IIM, he was guaranteed a successful corporate career in one of the biggest Indian conglomerates. However, his inspiration led him to walk away from it and dedicate his life to spirituality and service of God, Guru and mankind. “We can master all theoretical knowledge in the world, in any field, as a student or as a business or corporate professional.

However, how you handle stress and cope with unhappy situations will make or break your success. The mind can be your best friend or your worst enemy in this case,” explained Mukundananda. He shared the image of the metamorphosis of the caterpillar to butterfly. “If you cut the cocoon to free the butterfly from its struggle, you prevent it from fully developing its wings to fly.” Irani concurred that without the struggles he wouldn’t be where he is today. “Everyone needs a zero bulb moment in life to do bigger things,” referring to the epiphany moment when he realised he needed to take control of his life and it was up to him to turn it around.

Swamiji elaborated how life transformation requires discipline and will power. “Anything worthy of achieving in life always lies upstream. Learning to cultivate will power will move us ahead. The will power made of iron or steel will overcome any obstacle in front of it”, said Swamiji. Irani also warned about fear or taking the safe route. “Don’t do what the crowd does. Do it differently. It will attract the right people to you and lead you to success”, noted Irani.

Swamiji ended the program by encouraging the students to take a deeper dive into learning how to manage the mind and cultivate the proper mindsets. “Just like Irani took the decision to do his best and took upon himself to read, learn, and practice, practice, practice, you too must do the same”, said Swamiji. This story is provided by NewsVoir.