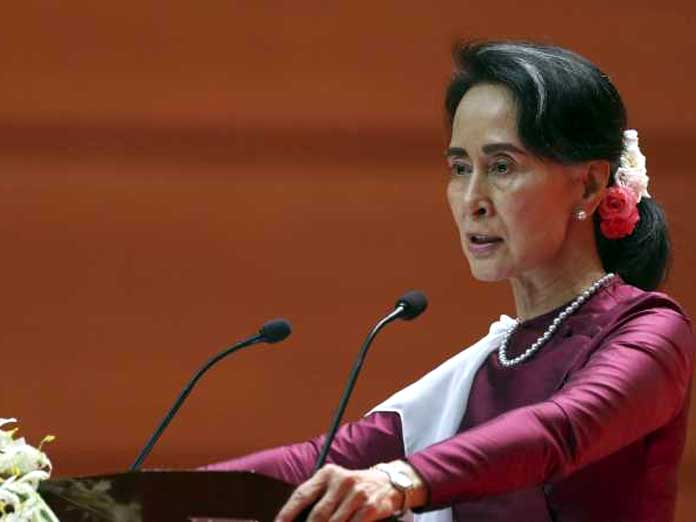 Myanmar leader Aung San Suu Kyi touted Rakhine states untapped economic potential to investors Friday, but glossed over violence that has scorched the area most recently claiming the life of an 18yearold civilian

Rakhine, a vast stretch of arable land covering Myanmar's western flank, with off-shore oil and gas deposits and a long coastline, is also one of the country's poorest states.

It has been scored by ethnic and religious conflict, especially in its restive northern region closest to Bangladesh.

More than 740,000 Rohingya Muslims fled across the border after a bloody army crackdown in August 2017.

The army is now also fighting rebels from the Rakhine ethnic minority, who are Buddhist.

But in opening remarks to foreign companies at a Rakhine investment forum Suu Kyi gave an upbeat characterisation of the economic boon awaiting investors.

Much of the state's potential "still remains untapped", she said at the forum in Rakhine's Ngapali beach, which is far south of the conflict area.

She trailed the promise of tourism, manufacturing and specifically the oil and gas sector as "one of the shining assets of Rakhine State".

Participants from India, Japan, Korea, Thailand, and China were in attendance -- the latter is building a massive port in the south of Rakhine and pipelines running through the strategically important state.

Suu Kyi blamed the international community for focusing "narrowly on negative aspects related to problems" in the northern part of the state rather than the potential to uplift Rakhine through development.

Rakhine, she said, is brimming with opportunities and "warm and friendly people, all eager to be part of the development adventure".

While Myanmar's former junta stunted the Southeast Asian nation's economy for decades, the advent of a civilian government under Suu Kyi in 2016 raised hopes of a turnaround in fortunes.

But slow reforms, a weakening currency, and conflict have stalled economic progress.

Suu Kyi's image as an upholder of human rights has also been shattered by the Rohingya crisis, which the UN has called ethnic cleansing.

The treatment of the Rohingya has spooked western investors and Myanmar has looked to its Asian neighbours to fill the gap.

China, Singapore, and Thailand lead foreign investment in Myanmar as of January, according to government statistics.

Suu Kyi's positive comments were undercut by fresh fighting in Rakhine's north between the military and the Arakan Army, an ethnic Rakhine force.

Villagers held a funeral for an 18-year-old Rakhine woman on Friday after she was killed in crossfire two days earlier as soldiers descended on their district in Rathedaung township.

"She was cooking near the house of the village head," a villager from Min Phoo village told AFP, requesting anonymity for safety reasons.

"Our villagers did nothing wrong."

Rakhine state police could not be immediately reached for comment.