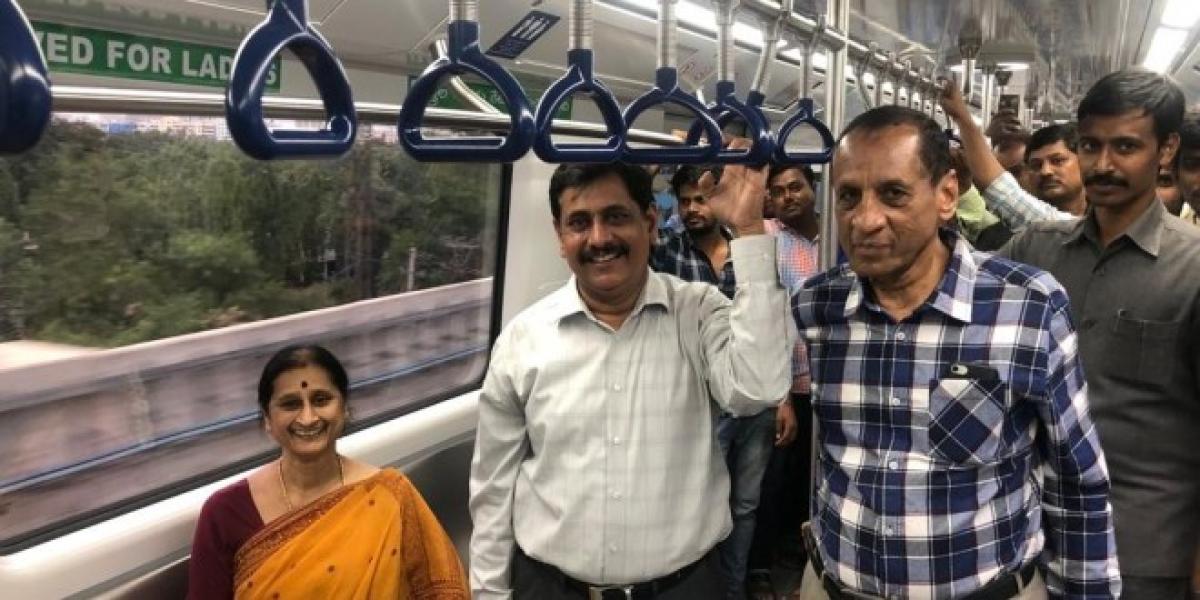 Governor E.S.L. Narasimhan sprang a surprise today by walking into Begumpet Metro Station with his wife without informing anyone and boarded the metro train like a commoner and started traveling to Ameerpet.


The governor couple got down at Ameerpet and boarded a connecting train to Miyapur. By then, L&T staff alerted HMRL MD NVS Reddy who was in inspection in Kukatpally area about governor’s metro train travel and HMRL MD immediately rushed to Miyapur station to receive him. Initially the Governor protested that he would not like to be received. Not giving up, NVS Reddy said he would take the Lady Governor around and show her the facilities. Then the Governor relented and agreed to the request of the MD on the condition that no passenger’s movement shall be obstructed. NVS Reddy agreed to this condition and taken the governor couple around the massive public space and facilities developed at Miyapur- art centre, inaugural plaza, waterless urinals, etc., etc.,


The Governor and his wife were highly impressed by the facilities and the crowds enjoying the public place at Miyapur and other stations. They said this is what will make Hyderabad a liveable and people friendly city.


Later, the Governor and his wife again boarded another train and travelled back to Ameerpet and then to Begumpet along with MD, HMRL. The governor couple are all praise for Hyderabad Metro and said it’s one of the best metros in the world. Congratulating NVS Reddy and his teams at HMRL and L&T, the governor advised him to develop some stations as art museums on the lines of Moscow metro. He also advised the MD to develop more shops at metro stations quickly to cater to the people’s daily needs.