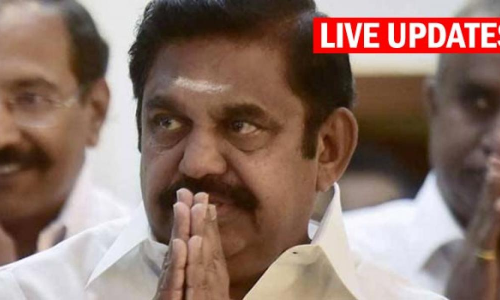 Tamil Nadu assembly is going through the motion of a trust vote for the first time in 29 years today to decide the fate of the VK Sasikala faction\'s AIADMK government headed by Edappadi K Palaniswami. Stay with us for live updates.

4:10 PM (IST) DMK leader Stalin says he will go on a fast near Gandhi Statue at the Marina, reports TOI's Pushpa Narayan.

3:50 PM (IST) The war has begun. You will soon have AIADMK govt with Opposition as CM - S Semmalai, AIADMK MLA

3:46 PM (IST) People who former chief minister J Jayalalithaa didn't want are back in politics. We will meet the governor if there is a need - Panneerselvam, AIADMK MLA

03:40 PM (IST) Stalin was manhandled by police. DMK MLAs are here to meet governor. More than 1,000 policemen were in the assembly. We were forcibly evicted. The speaker was biased through out - M Subramanian, DMK MLA

Chennai: Visuals from outside Raj Bhavan where DMK workers are protesting alleging that party MLAs were forcefully evicted from #TNAssembly. pic.twitter.com/NpqiCvnYni

03:18 PM (IST) Voting happening with entire opposition outside the House. The voting is between the two factions of AIADMK.

Even though I was manhandled and shirt was torn, I reconvened house. The house will function only acc to rules: P Dhanapal,TN Speaker pic.twitter.com/R3zabCJDAx

03:00 PM (IST) We are going to meet the Governor to apprise him of the situation here: MK Stalin

02:55 PM (IST) We were told that assembly will reconvene at 3 pm, but at 2 pm Police came and tried to forcefully evict us.My shirt also torn: MK Stalin

02:50 PM (IST) Speaker tore of his shirt himself and blamed MLAs of DMK. We reiterate our demand for a secret ballot: MK Stalin

02:45 PM (IST) The Police have entered the assembly and are not letting it function: T. M. Anbarasan,DMK MLA

02:38 PM (IST) All DMK MLAs are being forcefully evicted from the assembly hall. Stalin stays put inside the hall.

02:37 PM (IST) DMK MLAs are sitting on dharna in the lobby to assembly hall. These MLAs came out for a break but the marshals and police refused to allow them as speaker had ordered their eviction.

02:00 PM (IST) Meanwhile, Golden bay resort, where AIADMK MLAs from Sasikala camp were staying for a few days, has put out a notice saying it is closed "for maintenance".

01:58 PM (IST) Speaker says there is no way he can order secret ballot as the assembly rules don't permit. He said only division is possible.

An injured official being taken to hospital following massive ruckus in the assembly #floortest #TamilNadu pic.twitter.com/bzBSO1eGaZ

12:38 PM (IST) Assembly proceedings have been temporarily halted following huge uproar. An ambulance has been brought in

12:15 PM (IST) Tamil Nadu assembly has been adjourned till 1 pm after uproar

Police move towards Assembly premises after huge uproar inside by DMK and other parties demanding secret ballot #floortest pic.twitter.com/l1l1VCpzBn

12:10 PM (IST) DMK protest in assembly: Table in front of Speaker's chair has been broken. Microphones being thrown

11:50 AM (IST) Nobody can interfere in my decision on how to vote: Tamil Nadu assembly Speaker P Dhanapal

11:45 AM (IST) Division voting not happening as ruckus continues.

11:40 AM (IST) People's voice should be heard and then only the floor test should be done in the assembly: Panneerselvam

11:32 AM (IST) Why are you moving no confidence motion when you have 15 days time? Asks Stalin

11:32 AM (IST) Stalin demands Chair to move no confidence motion some other day. He bats for secret balloting to safeguard democracy.

11:30 AM (IST) Ruckus continues, DMK demands the Chair to allow Semmalai to speak.

11:25 AM (IST) Division voting, where MLAs are asked to stand up in six blocks.

11:24 AM (IST) All doors shut in Tamil Nadu assembly premises.

11: 21 AM (IST) Ruckus in assembly over demand for secret ballot.

11: 21 AM (IST) Speaker accepts motion. Yet to decide whether open or secret ballot.

11: 20 AM (IST) I assure that the MLAs will be given adequate security: P. Dhanapal, Assembly Speaker

11:18 AM (IST) Duraimurugan sought to know why Stalin's vehicle was searched and demanded action against police.

11:07 AM (IST) MLAs are being brought to the Secretariat like prisoners: MK Stalin

11:05 AM (IST) CM Palanisamy moves motion for the vote of confidence in TN assembly

10:05 AM (IST) I strongly appeal, atleast speaker should permit secret ballot. To some extent, MLAs will be free to exercise their franchise:BV Acharya

They're not given opportunity,huddled together in a resort with other MLAs.Where is the chance of any free thinking,deliberation?:BV Acharya pic.twitter.com/fwrz9Ec3Tj

You can't say it is a vote exercised by them (MLAs who stayed in resort) out of their free will: BV Acharya, special PP in Sasikala DA case pic.twitter.com/fYykrlZ1zs

09:02 AM (IST) Amma's legacy rests on able shoulders of OPS, this will be driving force to vote, not temporary confinement of brainwashing - M Pandiarajan

09:20 AM (IST) We don't think we are in single digit. We believe 135 people should vote for us - M Pandiarajan, former TN Minister & OPS supporter

Amma's legacy rests on abled shlders of OPS, this will be driving force to vote,not temporary confinement of brainwashing: M Pandiarajan pic.twitter.com/Blk9PxYdC5

07:37 AM (IST) Coimbatore North constituency MLA PRG Arunkumar has extended his support to OPS He managed to come out from the resort at Koovathur. He also resigned his post urban district secretary of AIADMK

06:51 AM (IST) Congress high command has decided to vote against confidence motion in Assembly today