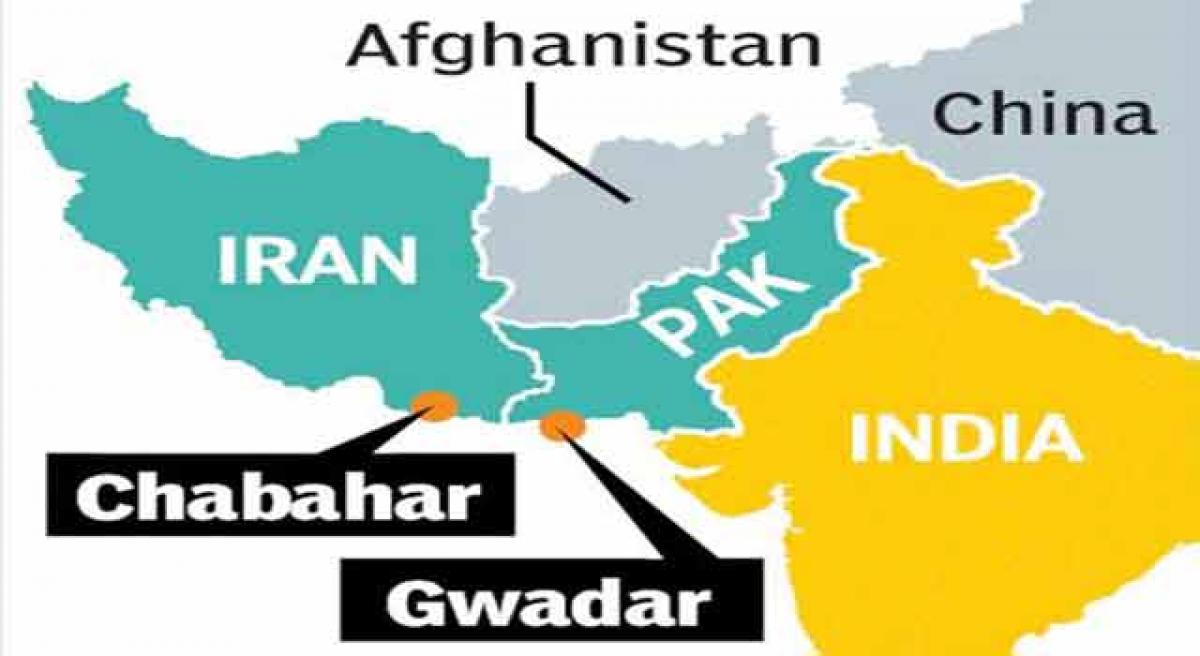 Visiting Iran this week, Prime Minister Narendra Modi is likely to take a series of steps that his predecessors should have done say, half-a-century...

Visiting Iran this week, Prime Minister Narendra Modi is likely to take a series of steps that his predecessors should have done say, half-a-century back. These could not be done for reasons ranging from lack of vision and resources on India’s part and cold war era compulsions when the two were in opposite camps.

The Chabahar port located in southeastern Iran is expected to act as a gateway for India not just to Afghanistan but to the whole of Central Asia, allowing India to sidestep Pakistan. This is precisely what land-locked Afghanistan wants for access to the sea without help from Pakistan with which it has uncertain ties

India and Iran hope to sign a commercial contract for the Chabahar port as well as modalities for India extending a $150 million line of credit for the project. This gets a huge boost with Japan likely to step in with funds and expertise.

Connectivity with Iran, with which India has enjoyed ancient relations, should have been a high priority for India after the loss of Karachi port with the creation of Pakistan. That would have provided a better access to Afghanistan and Central Asia that have always been India’s extended neighbourhood. Besides, it would have allowed India a presence in the Gulf region.

The port located in southeastern Iran is expected to act as a gateway for India not just to Afghanistan but to the whole of Central Asia, allowing India to sidestep Pakistan.

This is precisely what land-locked Afghanistan wants for access to the sea without help from Pakistan with which it has uncertain ties. Afghanistan is allowed to send goods to India via Pakistan, but cannot import them through the same route.

With the proposed agreement, Chabahar Port, touted as Indo-Iranian answer to Pakistan's China-built, China-funded Gwadar port on the Balochistan coast and the China-Pakistan Economic Corridor (CPEC). It has the potential to become a strategic bulwark for greater flow of people and goods among the three countries as well as in the region.

This is not a one-off move. Modi was in Saudi Arabia that is home to huge quantities of hydro carbons and workplace for millions of Indian workers. In March, External Affairs Minister Sushma Swaraj was in Tehran to pave the way for Modi’s Iran visit.

That was when the second meeting of experts from India, Afghanistan and Iran was held here to finalise a draft agreement that envisioned trilateral cooperation for providing alternative access to seas to Afghanistan, meaning its trade with India. It is a win-win situation for all concerned.

"When the agreement comes into force, it will significantly enhance utilisation of Chabahar Port, contribute to economic growth of Afghanistan, and facilitate better regional connectivity, including between India and connections to Afghanistan and Central Asia," a foreign office statement confidently stated.

To compliment Modi’s move as it were, in August, Japan’s Prime Minister Shinzo Abe will be paying the first top-level visit from Japan to Iran in 38 years. India last year announced plans to set up a urea fertiliser plant at Chabahar and Abe may compliment the Indian effort with investment in the port’s infrastructure.

The two would make the port more economically viable. In short, interests and investment plans – of economic and goodwill – of both India and Japan converge in Iran.

All this is coming pretty late in the day, though. Then Iranian monarch, Shah Reza Pehlavi, wanted to develop Chabahar in 1973, but his plans did not take off. His being deposed, the advent of clergy-led regime in Tehran and breakdown of ties with the United States created four decades of hiatus.

India and Iran have a long-standing agreement, signed in 2002, to develop Chabahar into a full deep sea port. Iran’s principal Bandar Abbas port handles 85 per cent of Iran's seaborne trade and is highly congested, whereas Chabahar has high capacity with plans to expand it from its current capacity of 2.5 million to 12.5 million tonnes annually.

Unlike Bandar Abbas, Chabahar has the ability to handle cargo ships bigger than 1,00,000 tonnes. Industry analysts emphasise on long-term plans to integrate Chabahar with the Chabahar port being linked to the International North-South Transport Corridor that would allow access to Europe.

All this is becoming possible only because the United States under Barack Obama has reached out to Iran, ending some of the economic sanctions. This forward movement augurs well for Asia as a whole. It has left behind a period when anyone doing business with Iran and buying its oil was under pressure to halt it.

India braved these pressures purchasing oil and paying through third countries and using third country channels to keep the supply of goods of daily needs for the Iranian people.

Chabahar is important for Iran as well. During its war with Iraq, the Iranian government noticed its important role in conducting its imports and exports because of its unique characteristics such as being out of the Strait of Hormuz and the Persian Gulf. So, Shahid-Beheshti port was built and equipped as the most important port in Chabahar.

The establishment of the port of Chabahar's connection to the country’s railway plan is under study and consideration. With the completion of the Kerman–Zahedan railway and its connection to the port of Chabahar, this port will connect to the Trans-Iranian Railway. Indian-Iranian project would link future Indian iron-ore mining operations at Hajigak in Afghanistan via Zaranj and Delaram to Chabahar, 900 kilometer away.

In economic terms, Chabahar is important to India. The free-trade zone around the port can be an important trade center with West Asia.

It can boost Iron ore, sugar and rice exports (all top import items in Iran) which have been ailing. It could reduce the Current Account Deficit. Reduced transportation costs will allow India to import crude oil, urea and dry fruits at lower prices.

On the other hand, the import cost of oil would reduce manifold; India investing fertilser plant in Iran could potentially saves 50 percent of fertiliser subsidy. Because of easy access to Central Asia, India's plan to set up fertiliser plant in countries like Mongolia could be realised.

Chabahar could be used to station security vessels for merchant ships off the African coast. It will provide India access to the West Asian and Gulf countries increasing trade and ties. It will also allow India a foothold in the western Arabian Sea, which is important as many of its energy imports pass.

Besides promoting commercial and cultural linkages, Chabahar could be a centre to coordinate humanitarian operations such as mass evacuation of Indian workers refugees in a future West Asian conflict. It can provide the diplomatic edge to India’s ambition of developing a blue-water navy. It could also help logistics as India's biggest refinery Reliance plans to revive oil trade with Iran.

Because of the Pakistan factor, India has been unable to participate wholeheartedly in the Iran-Pakistan-India (IPI) pipeline project. Chahbahar could be the starting end of an underwater pipeline bypassing Pakistan.

This narrative cannot be complete without considering the pitfalls. India has a very uneven record of completing projects abroad. The coordination with the participating countries, on table and on the ground, and more importantly, among Indian stakeholders, remains the key to success in Iran. If India does not deliver, others, especially China, are waiting in the wings.