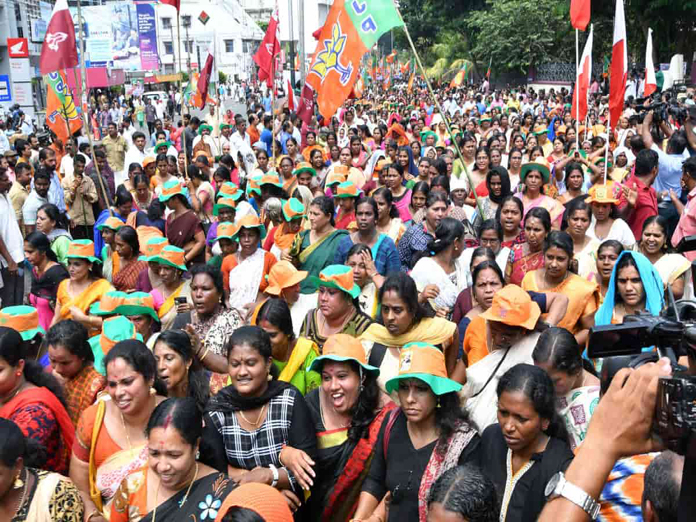 The furore created by the Muslim Women Protection of Rights on Marriage Bill, which was passed by the Lok Sabha on December 27, died a natural death as the Bill was rejected by the Upper House of Parliament on the last day of the year

The furore created by the Muslim Women (Protection of Rights on Marriage) Bill, which was passed by the Lok Sabha on December 27, died a natural death as the Bill was rejected by the Upper House of Parliament on the last day of the year.

However, the controversial practice of Triple Talaq, the instant Muslim divorce system, raises several questions about its relevance in contemporary times. Though in most of the Islamic countries including of Saudi Arabia, Morocco, Afghanistan and even Pakistan, the Triple Talaq has been banned, in India, the practice has been going on unchecked, ostensibly inviting the wrath of Muslim women in the country.

However, at a time when the ruling party and its fringe elements are making a hue and cry over the entry of two woman in their forties at the famed hill shrine of Sabarimala, following the Supreme Court verdict allowing women of all ages to have darshan of Lord Ayyappa, the presiding deity in the temple, the very same groups are vehemently seeking implementation of the Bill which has some provisions that need revision.

It is against this backdrop, one has to look into the belligerence with which the ruling party and its likeminded right-wing outfits try to get the Bill passed. It clearly shows how the democratic system in the country is being used as a tool to carry out majority fundamentalists’ evil machinations to silence and intimidate minority religious groups in the biggest democracy in the world.

It is ironical that in a country where its Prime Minister does not keep the basic morality in keeping his own marital relations alive and kicking, his large number of followers are trying to penalise men of minority communities on pretext of religious reformation.

This gives rise to ample apprehension in the mind of common public about the trend of religious majority to grasp power by stoking narrow, chauvinistic communal sentiments and then using the power to terrorise minority religious communities. It may be mentioned here that though people belonging to various religions took part in the first war of independence in 1857 against the British, majority religious groups conveniently convinced themselves that the defeat was their own.

Even the religious reformist organisations like Arya Samaj and Brahmo Samaj tried to bring in reforms before the 1857 rebellion, they did it just to coalesce majority religion and kept away minority religious groups. They could not conceive Indians as a single entity with various faiths, instead they preferred to feign ignorance of the presence of other smaller religions in the country.

By asking people to go back to Vedas, these reformists were trying to ameliorate early Hinduism and to establish that India would have future only by restoring the Vedic traditions and values.

While Arya Samaj, Brahmo Samaj and other Hindu organisations tried to attract people towards this direction, they suffered a huge setback with the setting up of Indian National Congress in 1888. These organisations which had been trying to bring in all dominant groups under a single umbrella in the name of Hindu reformation soon realised that they could not keep the newly emerged bourgeois with them anymore.

In 1920, when the Congress and Khilafat movement became a joined force, they again regrouped and brought to fore the ideology of Hindu reformation, resulting in the birth of Rashtriya Swayamsevak Sangh (RSS). By that time, India’s political map had undergone a sea change and the Congress started showing the signs of a strong anti-imperial force. Several protests led by Mahatma Gandhi forced the British empire to perceive the Congress as the major force that fought against the colonial rule.

It was at this time, the majority religious outfits gained prominence again and started working against minority religions. They managed to sneak into the Congress and the national movement and slowly spread across the country over the years.

Today those major religious groups are so powerful that they can torment minorities by making amendments in laws and creating new rules. Liberal democratic system of the country is under threat. Their efforts to pass the Triple Talaq Bill with draconian terms are the best example of how they are resolved to destroy the democratic system that stemmed from their confidence that they can fix their roots in the country deeper and deeper. And that is the very reason why everyone who believes in democracy should stand up against the Bill.