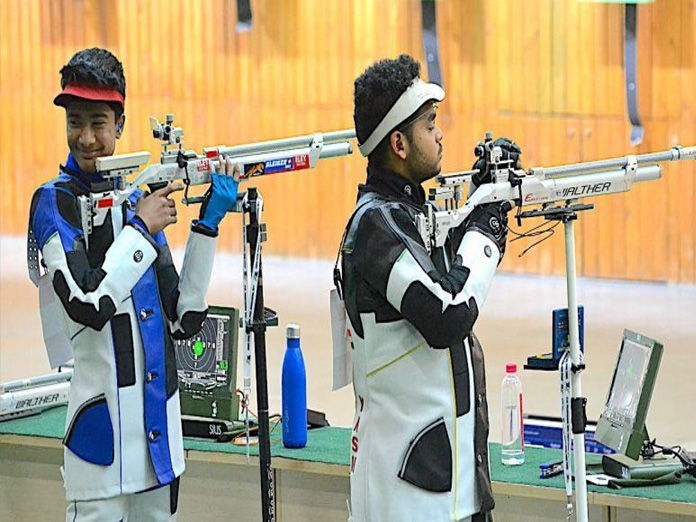 Dhanush was a picture of consistency through the day, topping the qualification with 629.7, his best score. He showed nerves of steel in the final where he was ahead of competition after each shot.
The 16-year-old, who has been shooting for just over two years after becoming a taekwondo Dan 2, is a product of Project Leap run by Olympic medallist Gagan Narang's Gun for Glory.

Arjun Babuta, who won Junior World Cup bronze medal in Gabala in 2016 and in Sydney last year, was third in qualification and remained in that spot in the final. Goa's Yash Yogesh earned silver, a mere 1.3 points behind the Hyderabad lad.

Dhanush’s mother Asha Srikant revealed that he had a Cochlear implant -- a hearing aid device -- in his first year. “He has been a happy, active child and has not needed to go to a special school,” she was quoted as saying in a media release.

Meanwhile, the U-17 final produced fireworks with only 0.2 points separating gold medallist Avinash Yadav of Madhya Pradesh from Rajasthan's Divyansh Singh. Odisha, Haryana make semis in U-21 men's hockey: Odisha and Haryana won their respective Pool B matches in the Under-21 men’s category to advance to the semi-finals in hockey.

Haryana produced an emphatic 6-1 win over hosts Maharashtra to secure their qualification to the semi-finals as they finished the pool stages with a tally of six points from three matches, a media release issued by Hockey India said. In the other Pool B match, it was Odisha, who maintained their 100 per cent record as they defeated Jharkhand 2-1 to top their Pool with a tally of nine points.

A brace from Odisha's Shilanand Lakra in the 9th and 35th minutes saw him put his team into a commanding position, while Jharkhand's only goal of the match came in the 39th minute through Ashim Tirkey. The semi-final matches of the Under-21 Men's competition will take place on January 13 where Punjab will take on Haryana, while Uttar Pradesh will face Odisha.

On Saturday, semi-final matches of the Under-17 Men’s competition will be held, where Odisha will take on Punjab, while Uttar Pradesh will be up against Haryana, the release added