How bills are passed in Parliament 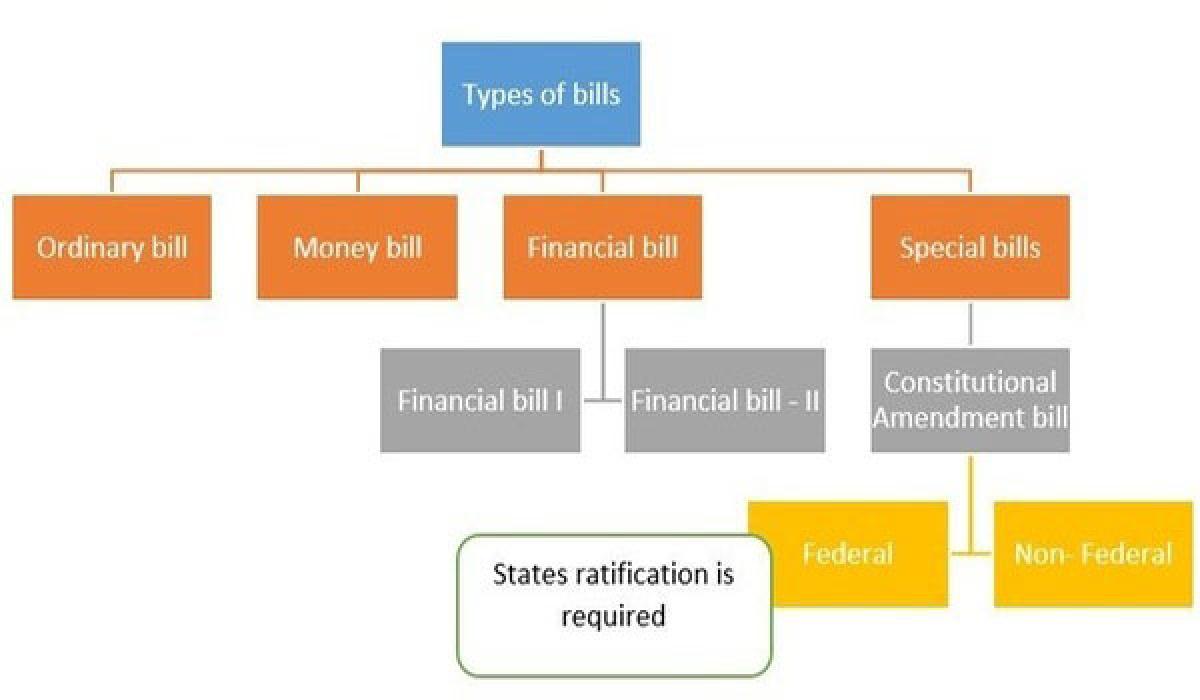 Legislation is the process of making or enacting a law in written form, according to some type of formal procedure, by the legislature. A bill is a proposal for a new law or a change to an existing one.If it is passed by the Parliament and assented by President, it becomes a law ,Bills introduced in the Indian Parliament can be classified into 4 types of bills.

Legislation is the process of making or enacting a law in written form, according to some type of formal procedure, by the legislature.

• Subordinate Legislation: Rules are framed in pursuance of the Constitution delegated by Parliament to a subordinate authority.

• Supreme Legislation: Legislation derived directly from the supreme or sovereign power in a state.

A bill is a proposal for a new law or a change to an existing one.If it is passed by the Parliament and assented by President, it becomes a law ,Bills introduced in the Indian Parliament can be classified into 4 types of bills.

The legislative procedure for each type of bill is as follows:

• Under Article 110(1) of the Constitution, a Bill is deemed to be a Money Bill if it contains only provisions dealing with all or any of the following matters:

(a) the imposition, abolition, remission, alteration or regulation of any tax;

(b) regulation of borrowing by the government;

(c) custody of the Consolidated Fund or Contingency Fund of India, and payments into or withdrawals from these Funds;

(d) appropriation of moneys out of the Consolidated Fund of India;

(e) declaring of any expenditure to be expenditure charged on the Consolidated Fund of India or the increasing of the amount of any such expenditure;

(g) any matter incidental to any of the matters specified in sub-clauses (a) to (f).

• A money Bill can originate only in Lok Sabha after the recommendations of the President.

• Any Bill dealing with revenues or expenditure but not certified as Money Bill by the Speaker is a Financial Bill.

• Financial Bill can only be introduced in Lok Sabha on the recommendations of the President.

• Financial bills should be passed by both Houses of Indian Parliament (Lok Sabha or Rajya Sabha) by Simple majority.

Financial Bills are of two types:

• Under Article 368 of Indian Constitution with the powers of parliament to amend the constitution.

• The bill can be introduced in any of the two Houses without recommendations of the President.

• Such Bills must be passed by each house (Lok Sabha and Rajya Sabha) separately with a special majority (two third of the members present and voting which must be more than absolute majority).

• By 24th Constitution amendment Act, 1971 it is obligatory for the president to give his assent to the Constitutional Amendment Bills.

• Ordinary bills are concerned with any matter other than Financial Bills, money Bills and Constitutional Amendment Bills.

• Such Bills can be introduced in either House of Indian Parliament (Lok Sabha or Rajya Sabha) without the recommendations of President of India.

• These bills are passed by Simple Majority in both Houses.

Also bills can be classified into

1. Government Bills – When a bill is introduced by a Minister of the Government.

2. Private Member’s Bills – When a bill is introduced by a Member other than a Minister of the Government.

How a bill is passed in both the houses

A Bill is the draft of a legislative proposal. It has to pass through various stages before it becomes an Act ofParliament.
First readingThe legislative process starts with the introduction of a Bill in either House of Parliament—Lok Sabha or Rajya Sabha. A Bill can be introduced either by a Minister or by a private member. In the former case it is known as a Government Bill and in the latter case it is known as a Private Member’s Bill.

It is necessary for a member-in-charge of the Bill to ask for leave to introduce the Bill. If leave is granted by the House, the Bill is introduced. This stage is known as the First Reading of the Bill. If the motion for leave to introduce a Bill is opposed, the Speaker may, in his discretion, allow brief explanatory statement to be made by the member who opposes the motion and the member-in-charge who moved the motion.

After a Bill has been introduced, it is published in the Official Gazette. Even before introduction, a Bill might, with the permission of the Speaker, be published in the Gazette.In such cases, leave to introduce the Bill in the House is not asked for and the Bill is straightaway introduced.

Reference of Bill to Standing Committee

The Second Reading consists of consideration of the Bill which is in two stages.

First Stage: The first stage consists of general discussion on the Bill as a whole when the principle underlying the Bill is discussed. At this stage it is open to the House to refer the Bill to a Select Committee of the House or a Joint Committee of the two Houses or to circulate it for the purpose of eliciting opinion thereon or to straightaway take it into consideration.
If a Bill is referred to a Select/Joint Committee, the Committee considers the Bill clause-by-clause just as the House does. Amendments can be moved to the various clauses by members of the Committee. The Committee can also take evidence of associations, public bodies or experts who are interested in the measure. After the Bill has thus been considered, the Committee submits its report to the House which considers the Bill again as reported by the Committee. If a Bill is circulated for the purpose of eliciting public opinion thereon, such opinions are obtained through the Governments of the States and Union Territories.Opinions so received are laid on the Table of the House and the next motion in regard to the Bill must be for its reference to a Select/Joint Committee. It is not ordinarily permissible atthis stage to move the motion for consideration of the Bill.

Second Stage: The second stage of the Second Reading consists of clause-by-clause consideration of the Bill as introduced or as reported by Select/Joint Committee.Discussion takes place on each clause of the Bill and amendments to clauses can be moved at this stage. Amendments to a clause have been moved but not withdrawn are put to the vote of the House before the relevant clause is disposed of by the House. The amendments become part of the Bill if they are accepted by a majority of members present and voting. After the clauses, the Schedules if any, clause 1, the Enacting Formula and the Long Title of the Bill have been adopted by the House, the Second Reading is deemed to be over.

Thereafter, the member-in-charge can move that the Bill be passed. This stage is known as the Third Reading of the Bill. At this stage the debate is confined to arguments either in support or rejection of the Bill without referring to the details thereof further than that are absolutely necessary.

Bill in the other House

After the Bill is passed by one House, it is sent to the other House for concurrence with a message to that effect, and there also it goes through the stages described above except the introduction stage.