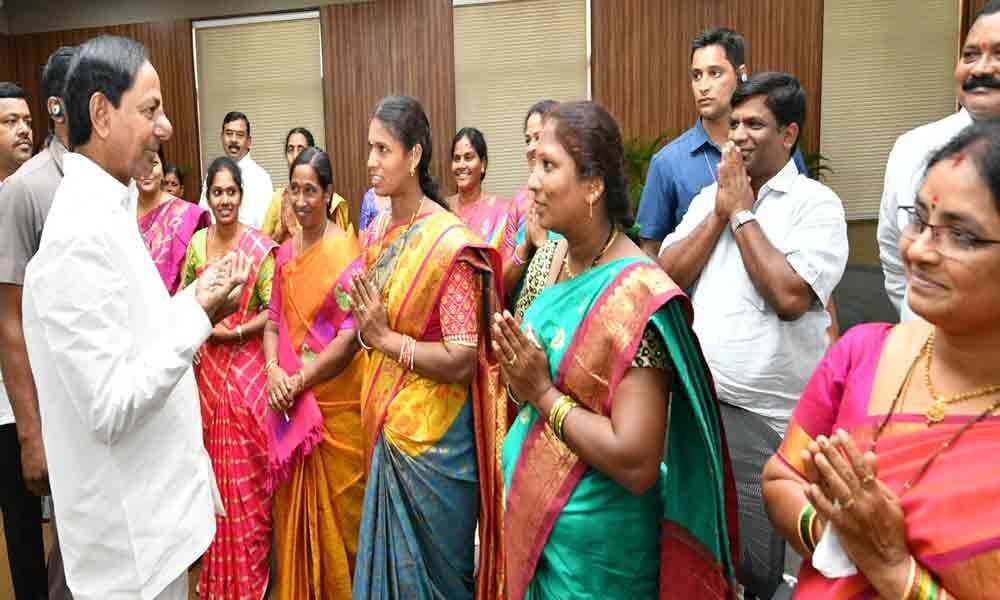 Hyderabad: Telangana Chief Minister K Chandrashekar Rao on Tuesday announced Rs 10 crore 'prize money' for the best performing Zilla Parishad (ZP) in the state from this year. The cash prize will be given from the CM Special Development Fund to the zilla parishad which stood first in reaching the target and worked for the development of all villages in the particular district. The prize money can be utlised for further development of the backward areas.

The newly-elected ZP Chairpersons and Vice-Chairpersons called on the chief minister at his camp office in Pragati Bhavan. The CM felt that all the villages in the state should emulate and become one like Gangadevipally, Mulkanur and Ankapur villages which were adopted by him.

"For the zilla parishad that stands first, Rs 10 crore will be released from the CM Special Development Fund. If more than one achieves this goal, we will also release funds for them. All the 32 ZPs should be on the top. We will fix some benchmarks and standards for this too. My desire is that all the 32 ZPs should get Rs 320 crore by standing first.

Every ZP chairman will also get a new car," he said. He also announced that a training workshop would be conducted for the newly-elected chairpersons and vice-chairpersons of the zilla parishad in Hyderabad shortly. He wanted the elected representatives to play a key role in implementing the new Panchayat Raj Act.

Stating that his government will transfer all the powers and responsibilities as guaranteed under the Constitution to the local bodies soon, the chief minister said that the government will finalise the administrative, financial and monitoring powers shortly. Change should be visible in six months.