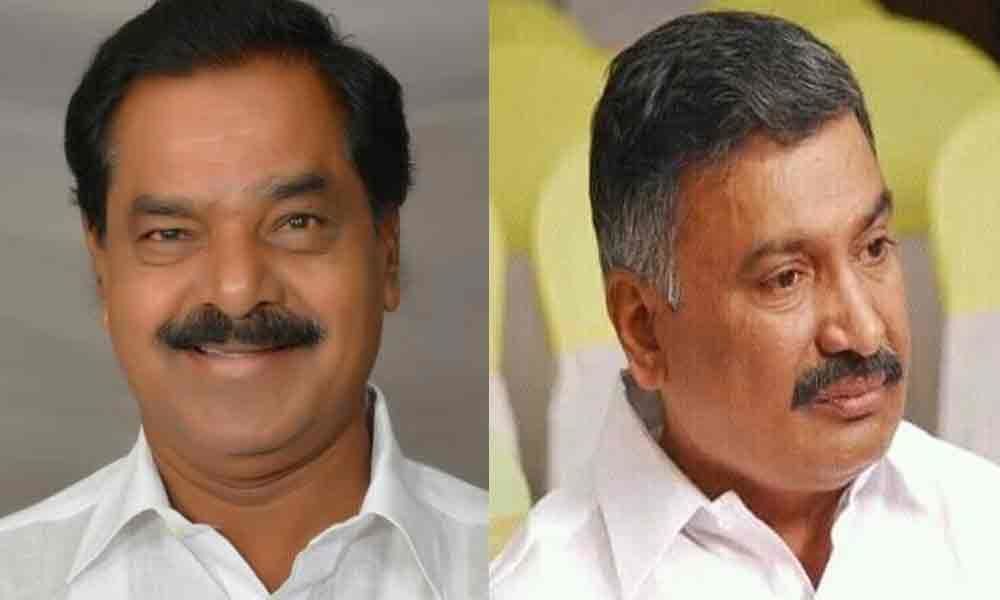 By getting two cabinet berths and one Whip post, the district got ample representation in the YSRCP government.

Tirupati: By getting two cabinet berths and one Whip post, the district got ample representation in the YSRCP government. It was evident from the selection of MLAs for the three posts, Chief Minister YS Jagan Mohan Reddy has taken meticulous care by considering all aspects.

In the selection of MLAs for ministerial berths, Jagan made tactful moves by choosing Peddireddi Ramachandra Reddy and Narayana Swamy and Chevireddy Bhaskar Reddy as Whip. The party rank and file in the district has been expressing happiness over the selection of leaders and they hope that they will lead the party to make it even stronger in the coming days.

Needless to say, Peddireddi was the man behind the victory of several other MLAs in the district as he helped them by all means during elections. He has huge number of followers in several constituencies as he worked as District Congress Committee chief for several years when he was in Congress before the inception of the YSRCP.

Peddireddi was instrumental in making the party win more seats than TDP in Chandrababu's home turf during the last three elections. He was the contemporary of Chandrababu Naidu and was known for opposing him even from university days. From 1989 he won six elections–three each from Piler and Punganur and lost only once in 1994.

In the recent elections, he took the mantle of responsibility of selecting candidates and making them to win in at least seven constituencies. The major victory for him personally was gaining Chittoor Lok Sabha seat after six terms from TDP. By convincing the party chief Jagan, he selected his follower Reddeppa for the seat and put all efforts for his victory. He was considered as a good political strategist and was aware of ground level situation in several constituencies along with the strengths and weaknesses of opposition parties there.

After reorganisation of constituencies, he moved on to Punganur from Piler in 2009 and consecutively won for three times from there with huge majority though it was known as TDP's strong hold before that. In the recent elections, his son Mithun Reddy was elected as MP for second time from Rajampet and was made party floor leader in Lok Sabha. His brother Dwarakanath Reddy has emerged victorious as MLA from Thamballapalle.

During the last 10 years, he was the main strength of the party in the district in all aspects and his efforts did not go in vein. The new Deputy Chief Minister Narayana Swamy also belongs to Peddireddi's group and was made the party chief in the district since its inception till 2018 and after that he took over as party State general secretary. He led the party to success, which won more seats than TDP in both 2014 and 2019.

Considered soft spoken and non-controversial leader, he maintains cordial relations with all other leaders in the district. He represented Satyavedu in the Assembly once and moved on to GD Nellore in 2014 and won comfortably in the last two elections. He defeated senior leader G Kuthuhalamma in the last election and her son in this election.

When seven Reddy candidates have won from YSRCP and only two of them for the first time, no other MLA from same community cannot expect anything else. In the social equations, two MLAs from Reddy community and one from SC got recognition in the government. This leaves other leaders like RK Roja, B Karunakar Reddy and C Ramachandra Reddy to be ignored in the cabinet formation. However, their followers are believing that they will be considered suitably for nominated posts that would be equal to cabinet rank.