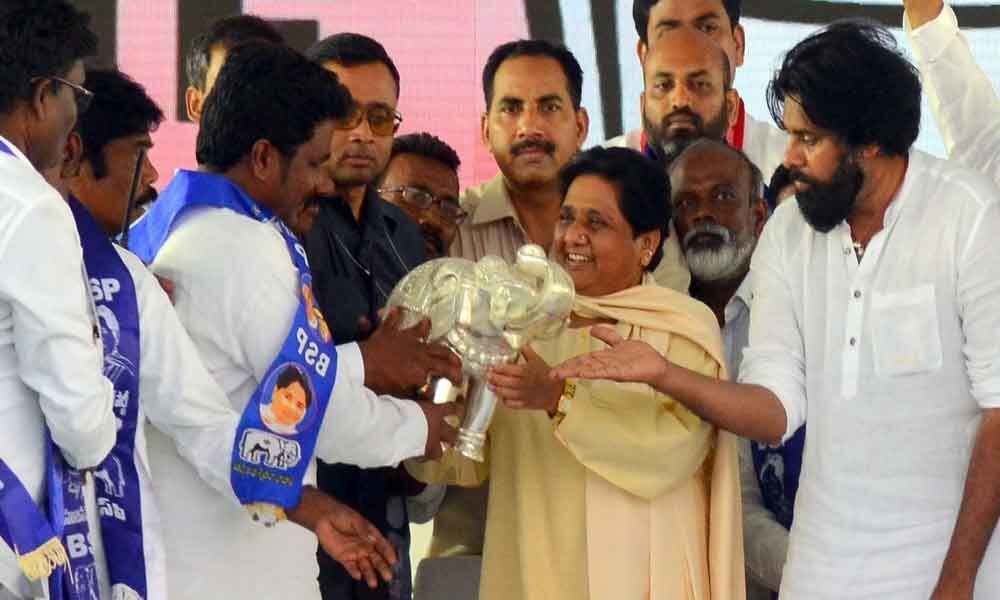 Bahujan Samajwadi Party (BSP) president and former Chief Minister of Uttar Pradesh Kumari Mayawati said the BJP and TDP had failed to fulfill the pre-poll promises and called upon the people of Andhra Pradesh to defeat the two parties in the ensuing elections.

Vijayawada: Bahujan Samajwadi Party (BSP) president and former Chief Minister of Uttar Pradesh Kumari Mayawati said the BJP and TDP had failed to fulfill the pre-poll promises and called upon the people of Andhra Pradesh to defeat the two parties in the ensuing elections.

She said the BJP had betrayed the people of Andhra Pradesh on the Special Category Status and also failed to fulfill the assurances given to the people of India.She addressed a public meeting at the Makineni Basava Purniah Stadium in Vijayawada on Wednesday.

The meeting was organised by the alliance parties, the Jana Sena, the CPI, CPM and BSP. It may be recalled that the four parties have formed into an alliance in the State and are contesting the Lok Sabha and Assembly elections.

Jana Sena Party president Pawan Kalyan presided over the meeting, which was attended by several thousand supporters of four parties. Addressing the gathering, Mayawati said Narendra Modi had promised Achey Din (good days) to the people of India but he failed to bring good days.

Mayawati said corruption was rampant and crores of people suffered many problems due to the demonetisation of currency notes and implementation of GST. She said minorities, weaker sections and Dalits were targeted in the BJP rule and appealed to the people to defeat the party.

She predicted that the Telugu Desam Party would lose the elections in the State because it lost the confidence of the people. She said the TDP also failed to fulfill the pre-poll promises and the people of Andhra Pradesh are waiting for an alternative government.

Jana Sena chief Pawan Kalyan has said he derived inspiration from Mayawati and praised her leadership qualities saying that she became Chief Minister of Uttar Pradesh four times with her determination.

He pointed out that Mayawati is the daughter of a postal department clerk and became one of the prominent leaders of the country with hard work and commitment.He said memorials built by Mayawati in memory of great leaders like Dr Babasaheb Ambedkar and Jyothirao Phoole in UP are were attracting a large number of visitors to Uttar Pradesh.

The cadre and supporters of Jana Sena, BSP and Left parties were ecstatic over the success of meeting and raised slogan 'PM PM' when Mayawati spoke and raised slogans 'CM CM' when Pawan Kalyan addressed the public meeting. Chigurupati Babu, the alliance candidate for the Vijayawada central Assembly constituency, appealed to the voters to vote for the alliance candidates in the elections.