Rahul Gandhi, a hero, who never bows his head 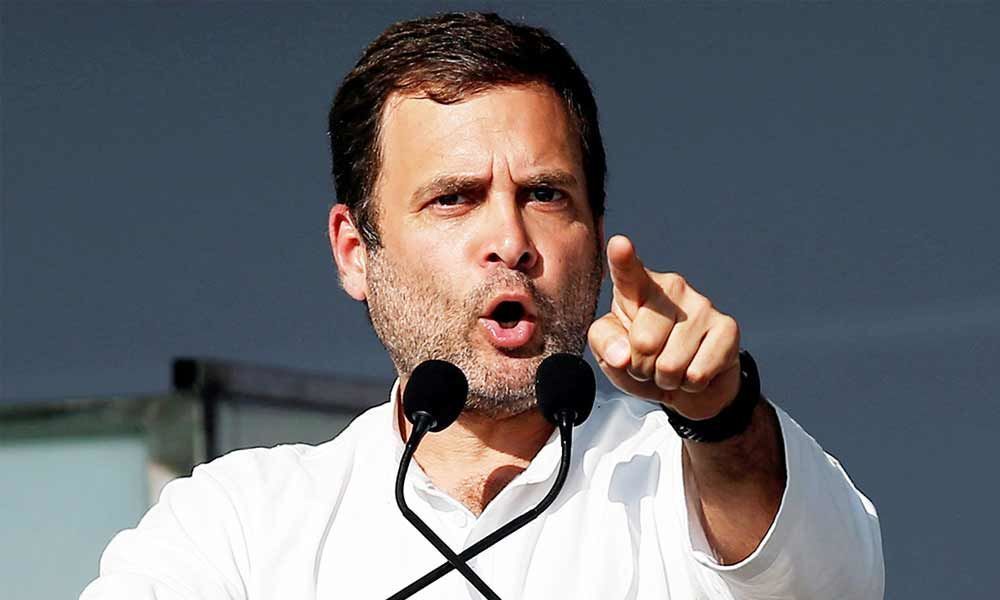 Who is Rahul Gandhi? Why is the whole country looking up to him?

Who is Rahul Gandhi? Why is the whole country looking up to him? Why are the people wanting this young man to become the Prime Minister of the world's largest democracy of 130 crore people? Does Rahul Gandhi have the ability to govern such a large country?

In a world led by communication revolution, does Rahul Gandhi have the ability to govern the country, which is engaged in a fierce competition with the other countries?

All these issues have come into sharp focus in the ongoing debate during the general elections.

So, there is a need to understand as to who essentially Rahul Gandhi is. His great grandfather Motilal Nehru was a renowned freedom fighter of India; his grandfather Jawaharlal Nehru was country's first Prime Minister; his grandmother Indira Gandhi was the first woman Prime Minister of the country; his father Rajiv Gandhi, was the youngest Prime Minister in the history of India; and his mother Sonia Gandhi was UPA chairperson for over a decade, who brought about transparency in governance.

There are three Prime Ministers in Rahul Gandhi's family. So power is not new to the Nehru-Gandhi clan. In the national freedom struggle, this family sacrificed its all, to achieve Independence for the country.

For Rahul Gandhi, politics is not a hereditary entitlement. He started working with NSUI and Youth Congress. Since 2004, he has been winning successive parliamentary elections from Amethi.

Though he got the opportunity to become the Prime Minister in 2004 and in 2009, he demonstrated that post and position do not hold any attraction for him. As AICC general secretary from 2007, he gained political experience. In 2013, he became Congress Vice-President.

In 2014, Rahul Gandhi assumed charge and responsibility of Congress Campaign Committee chairman. Though the party suffered total rout in the polls and he came under tremendous pressure, undeterred, he worked with single-minded devotion for galvanising the party organisation from the grassroots level.

On December 16, 2017, the party leadership entrusted him with the onerous responsibility of Congress President. Rajiv Gandhi and Rahul Gandhi are among the leaders, who took over the reins of the party at a fairly very young age.

Thrice as MP, as AICC general secretary, as Congress Campaign Committee chairman, as one who worked with NSUI and Youth Congress, Rahul Gandhi achieved the unique and unrivalled distinction of imbibing the ideology and values of the Congress, besides gaining deep understanding of the ways of the government, from very close quarters.

Owing to such a rich and a varied experience, he was able to lead the party to victory in the four State Assembly elections held after his assuming command of the party.

Rahul Gandhi played a pivotal role in dethroning the BJP that was well-entrenched for a long time in Madhya Pradesh, achieving victory for the Congress in Rajasthan, preventing BJP from coming to power in Karnataka and winning in Chhattisgarh.

Charming the people across the country, from Kashmir to Kanyakumari, across all the States and all the regions, mingling with one and all and drawing people from all sections, listening to their problems and understanding them and taking steps to resolving the same – all this holds a mirror to his straight-forward politics.

People now want him to become the Prime Minister of this great country. He taunted the BJP to provide good governance to the country, disregarding the insults heaped on him by dubbing him as Pappu.

Those who dubbed him as Pappu now see him as a flaming warrior, which is a big lesson for other political leaders to learn from him.

In his own style he exposed the failures and broken promises of the BJP, such as the promise of getting back black money from foreign banks and tax-havens and depositing Rs 15 lakh into the bank accounts of each and every citizen; of creating of 2 crore jobs annually; and of reducing the prices of essential commodities.

Similarly, Rahul Gandhi exposed the massive scandal of Rs 19,000 crore in the Gujarat State Petrochemical Corporation, which surfaced during the tenure of Narendra Modi as Gujarat Chief Minister, forcing the people to reflect.

Rahul Gandhi has cornered Modi by charging him with looting the country for the sake of Ambani and Adani, when people are struggling to eke out their existence.

Similarly, Rahul Gandhi has cleverly hit back at the BJP's politics of patriotism by creating a war-like situation through the surgical strikes.

Soon after the Pulwama attack, Rahul Gandhi stood with the Modi government and declared open support to any decision taken by the government, proving that nothing is more important for him than national security.

Political Pundits now see Rahul Gandhi as more formidable than Prime Minister Modi and they feel that the nation needs a guiding force like Rahul Gandhi to lead the country. He has no lure of political office and he has no fancy for amassing wealth.

All the virtues needed in a political leader are seen distinctly in Rahul Gandhi. The desire to do something for the country, a burning ambition to make the people great can clearly be seen in Rahul Gandhi.

Rahul Gandhi goes to a small roadside tea stall to have his tea. Somewhere, he halts to have pakoda. He goes to the house of the poor and relishes their food with affection.

He chats with brotherly affection with girls. He mingles with the intellectuals. He discusses the future of the country with the business class.

Rahul Gandhi interacts with all sections of society. He deeply analyses every problem and looks for solutions. He announced novel schemes. That is the style of Rahul Gandhi.

His first priority is to pull the country out of the agrarian crisis and giving jobs to the youth, besides providing assistance to them till they get jobs. It is for this reason that he has announced Rs 2 lakh loan-waivers for the farmers and implemented it in the States where Congress came to power, credit for which goes only to Rahul Gandhi.

Rahul Gandhi dared Modi that he would not protect the interests of chosen businessmen, that he would bow his head only in front of the people and that he does not have the nature bowing before anyone else. This has become a big debating point in the country.

Rahul Gandhi is seen distinctly as the future Prime Minister of the country. Today the contest is mainly between Narendra Modi and Rahul Gandhi. Though there are several senior leaders, they are all only confined to regional parties. They lack pan-Indian acceptance, as they are at best regional leaders.

Whether it is Trinamool leader Mamata Banerjee in West Bengal, or TDP leader Chandrababu Naidu in Andhra Pradesh, or BSP leader Mayawati and SP leader Akhilesh Yadav in Uttar Pradesh, or RJD leader Lalu Yadav and his ally Sharad Yadav in Bihar, or TRS leader KCR in Telangana, or NCP leader Sharad Pawar in Maharashtra, or BJD leader Naveen Patnaik in Odisha, and many such other leaders, they are all confined merely to their own States and they have emerged as only State-level leaders of regional parties. They do not have the opportunity to travel across the country, nor do they need to do so.

In the present political scenario in the country, Congress President Rahul Gandhi alone appears to be the future Prime Minister of India.

(The writer is former PCC president)