A champion in Bharatanatyam 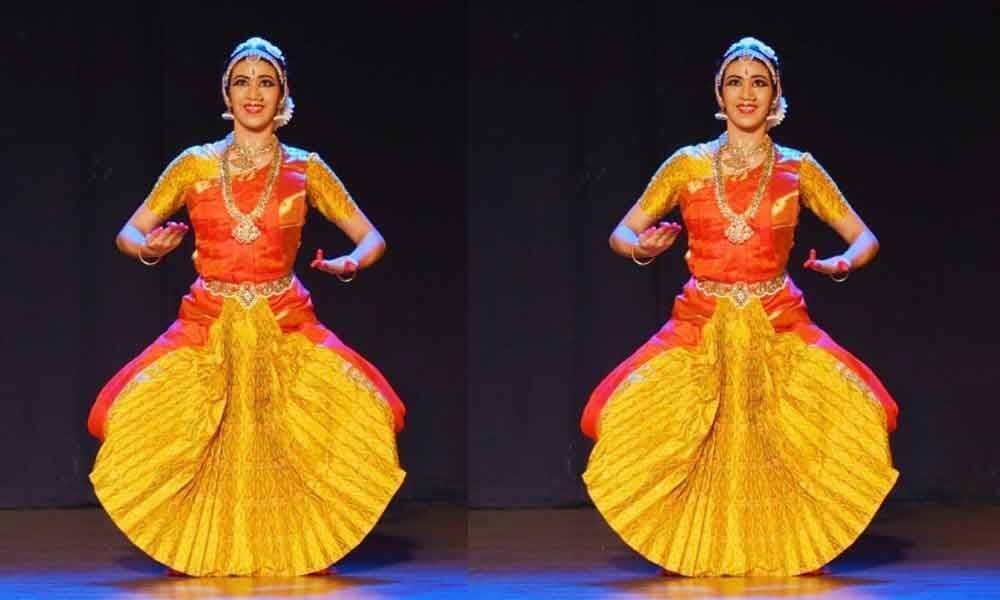 Rajasree began her performance by invocating Lord Ganesh with Vatapi Ganapatim in Hamsadhwani Ragam, Adi Talam. This was followed by Alarippu, a traditional dance piece, where the dancer sought the blessings of God, the Guru and the audience.

Rajasree began her performance by invocating Lord Ganesh with Vatapi Ganapatim in Hamsadhwani Ragam, Adi Talam. This was followed by Alarippu, a traditional dance piece, where the dancer sought the blessings of God, the Guru and the audience.

The sequence had the Varnam: Swami NadanaiAzhaituva / KambhojiRagam / AdiTalam, This was the centrepiece of the evening which portrays a lovelorn maiden who entreats her friend to fetch her Lord Subramanya Swamy. "How can someone who is cognizant of my love, be willing to ignore my pain even for a second? I cannot bear the pangs of separation. Is his heart must be made of stone, for it will not soften even on seeing my plight".

BhoShambho / RevatiRagam / AdiTalam came next. This chant in praise of Lord Shiva was penned by the revered Sri Dayananda Saraswati. "Lord Shiva, the self-created one, helps me cross the ocean of worldly pleasures. He is both the form and foinless, he is beyond time and space, he is both "finite and infinite".

Bhavayami Gopalabalam / YemanKalyaniRagam / KhandaChapuTalam is a popular kriti where Annamacharya prostrates at the feet of young Gopala. He describes Krishna's shining girdle belt and chiming anklets. He says the unrestful mind finds peace in the swift dance of Krishna around the young maidens.

He says the butter-thief, the young Gopalan is none other than the incomparable Hari. The young dancer's training from the legendary Guru was on display here. Thillana / KhamasRagam / TisraAdiTalam showcased Rajasree's nritta and a promise of a great future.

Rajasree's journey in Bharatanatyam commenced at the tender age of 10 years under Guru Hemamalini Arni. After 5 years of training, she started preparing for her Arangetram or solo debut under the guidance of Kiranmayee Madupu, Guru Arni's senior disciple.