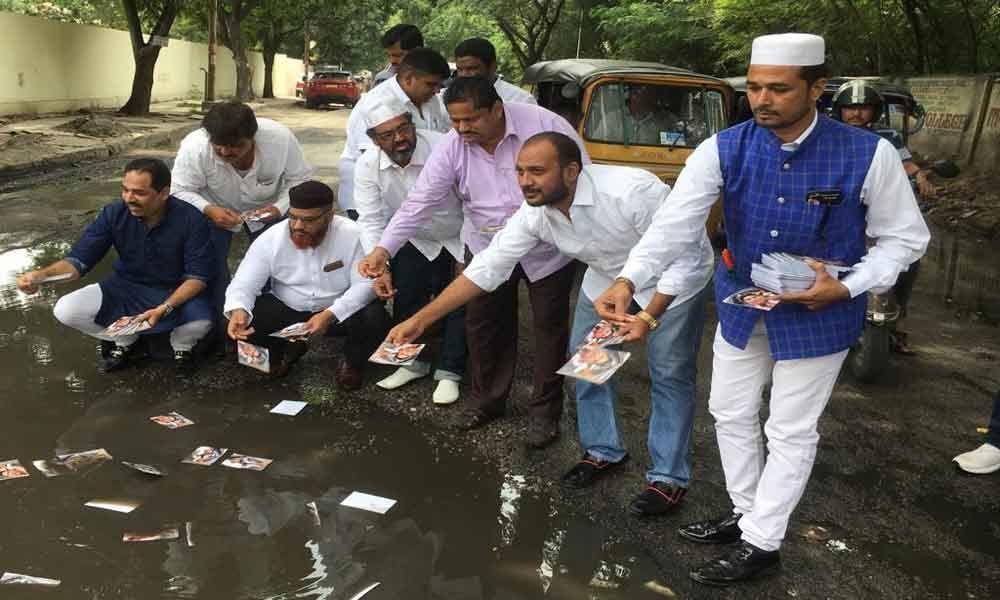 Angered over delay in filling up the potholes on city roads, Congress party workers held a novel protest on Wednesday by filling up potholes with...

Nampally: Angered over delay in filling up the potholes on city roads, Congress party workers held a novel protest on Wednesday by filling up potholes with pictures of Chief Minister K. Chandrashekhar Rao and TRS Working President K. Tarakarama Rao.

The Congress party workers, led by Telangana Pradesh Congress Committee (TPCC) Minorities Department Chairman Shaikh Abdullah Sohail, went to different areas and dumped the portraits of KCR and KTR. "The father-son duo is directly responsible for the pathetic condition of roads in the twin cities of Hyderabad and Secunderabad.

CM KCR has no time to visit any area of the city to check the bad condition of roads while his son KTR, who held the portfolio of Municipal Administration for five years till December 2018, is busy with political activities.

The CM is having a lavish lifestyle in his palace 'Pragathi Bhavan' and KTR is available only on Twitter. Both have misled the people of Greater Hyderabad in last municipal elections and secured their votes for TRS. But they went missing after TRS gained control over GHMC," Abdullah Sohail said, while speaking to the media persons.

Abdullah Sohail said that the condition of roads has turned from bad to worse and they turned into 'killer roads.' He pointed out that 1,155 were killed and 8,783 in road accidents in the last three-and-a-half years ever since the TRS won the GHMC elections. He said bad roads were the major cause of accidents in majority of cases.

Of the 1,258 accidents reported till June 30, as many as 446 cases pertained to 2-wheelers. Similarly, of 129 deaths in these accidents, 53 victims were pedestrians, 42 were 2-wheeler riders or pillion riders and 28 of them were due to Self Cause/Own, he said.

"GHMC cannot get away by blaming the recent rains for bad conditions of roads. GHMC Commissioner Dana Kishore himself admitted that there more than 4,000 potholes on city roads. But in reality, the number is much higher. When the GHMC authorities are able to count the number of potholes why is it that they are not filling them up on immediate basis?" he asked.