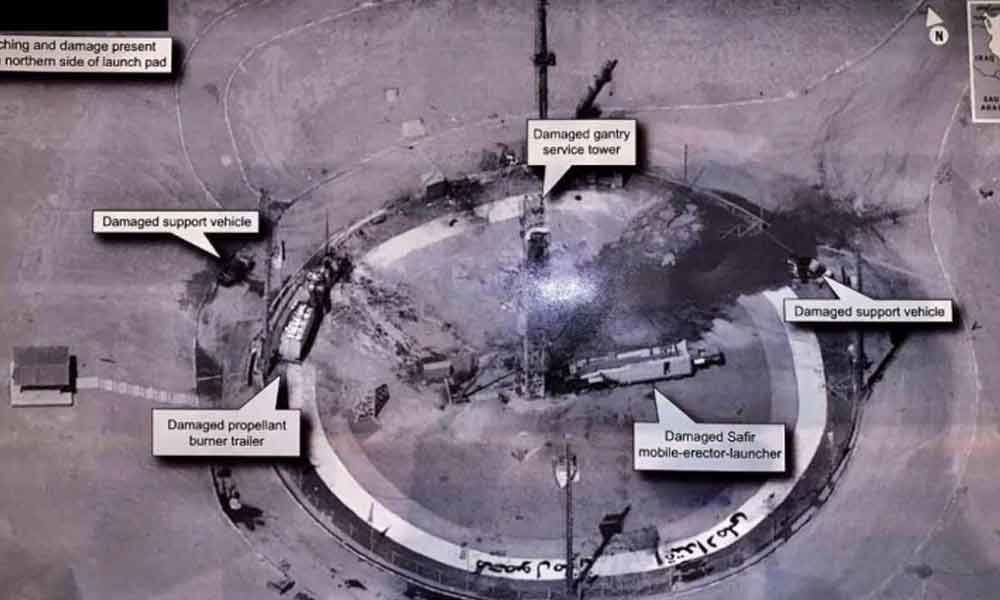 The incident comes after months of tensions between Iran and Washington.

Washington: President Donald Trump on Friday released a photograph of an apparently failed Iranian rocket launch and said that the United States had nothing to do with it.

Tehran has made no official comment on the indications from aerial photos that a rocket exploded Thursday on the launch pad at the Semnan Space Center in northern Iran.

But Trump tweeted a high-resolution picture of the location, with annotations pointing to damaged vehicles and the launch gantry, saying it involved Iran's Safir satellite rocket.

The incident comes after months of tensions between Iran and Washington.

Trump last year unilaterally withdrew from the landmark 2015 international deal that placed limits on Tehran's nuclear activities in exchange for the lifting of sanctions, and he reimposed crippling financial penalties.

"The United States of America was not involved in the catastrophic accident during final launch preparations for the Safir SLV Launch at Semnan Launch Site One in Iran," Trump said in a tweet.

The United States of America was not involved in the catastrophic accident during final launch preparations for the Safir SLV Launch at Semnan Launch Site One in Iran. I wish Iran best wishes and good luck in determining what happened at Site One. pic.twitter.com/z0iDj2L0Y3

Publicly available satellite photos also show what appears to have been the rocket's explosion on its launch pad.

Tehran was believed to have been planning a third attempt to loft a satellite into space, after two launches in January and February failed to place satellites in orbit.

Iran's Minister for Communications and Information Technology Mohammad Javad Azari Jahromi rejected reports that a satellite had been lost, but did not comment on the alleged launch-pad explosion.

"Apparently there were reports that the third attempt to put the satellite in orbit were unsuccessful. In fact, Nahid 1 is alright and is right now in the laboratory. Reporters can come visit the laboratory, too. #transparency," he tweeted.

Washington keeps a close eye on Iranian space activities as an indicator of advances in its nuclear and ballistic missiles programs.

Iran says its rocket program is for civilian use in space. However, because the rockets use similar technology to long-range ballistic missiles, Washington eyes the country's activities sceptically.

Earlier this week satellite photographs from Planet Labs had shown that a fresh coat of blue paint had been added to the launch pad at the Imam Khomeini Space Port, part of the Semnan Center, suggesting a launch was in preparation.

Photographs taken on Thursday showed the paint scorched off of half of the pad.

- Did Trump expose US intel? -

But the commercial photographs showed none of the detail that Trump's did.

Intelligence experts said Trump may have exposed a previously unknown level of resolution US spy satellites have achieved, or that, somehow, US intelligence was able to get a closer shot of the launch site from an overflying aircraft.

Shadows and glare on Trump's picture suggested it was a snapshot of the original taken with a cellphone, presumably in a secure environment like the White House Situation Room, which has multiple video screens for intelligence briefings.

CNBC reported that a defence official confirmed the photo of the launch pad was included in Friday's White House intelligence briefing.

Speaking to reporters late Friday, Trump said he had the authority to release the picture.

"They had a big problem," he said of Iran's launch.

"We had a photo and I released it, which I had a right to do."

Allison Puccioni, an imagery specialist at Stanford University's Center for International Security and Cooperation, said on Twitter that such resolution is not available to people in the open-source, or public intelligence community.

"The dissemination of this image seems out-of-step with the US policy regarding its publication of such data. Not sure what the political objective of dissemination was," she said.

The New York Times reported this week that the US staged a secret cyberattack in June against a database used by Iran's Islamic Revolutionary Guard Corps to plot attacks on oil tankers in the Gulf, the latest in an ongoing cyber conflict between the US and Iran.