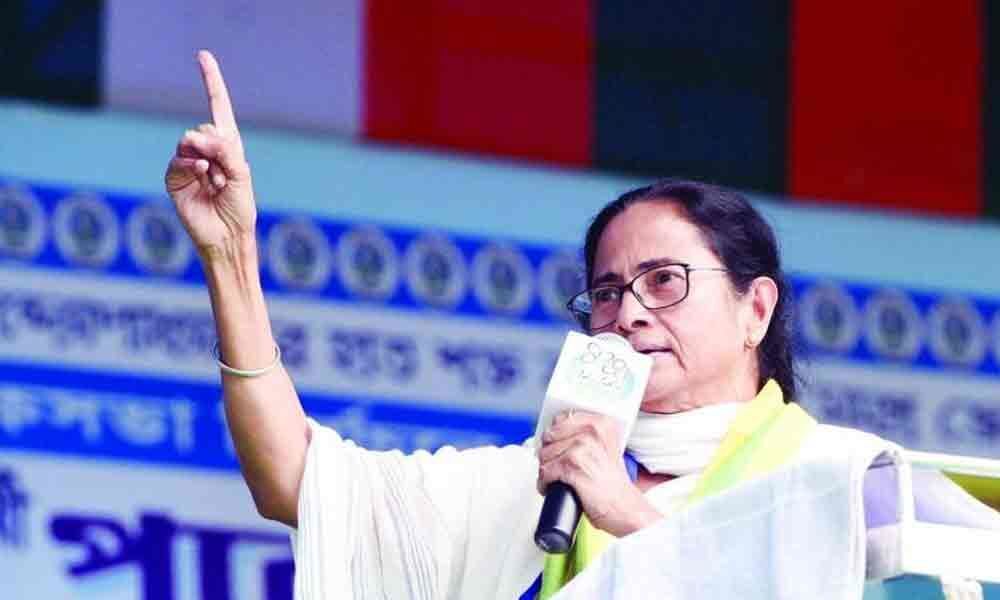 BJP as 'Ram' in the middle with 'Baam' (Left Front) on its left and 'Shyam' (Cong) sitting on the right side are together, Banerjee said.

Raina: West Bengal Chief Minister Mamata Banerjee on Monday alleged that the Congress and the Left are working together to help the BJP in the ongoing LS polls so that Narendra Modi could become the Prime Minister again.

She said those who used to support the Left Front during their rule in the state, have changed sides to join hands with the BJP in West Bengal.

"The Congress and the CPI(M) have joined hands to help the BJP so that Modi can become the Prime Minister again. The three - BJP as 'Ram' in the middle with 'Baam' (the Left Front) on its left and 'Shyam' (Congress) sitting on the right side - are together," Banerjee said addressing a rally here in Burdwan district.

"Those who were 'harmads' of the CPI(M) have now become bosses in the BJP," the Trinamool Congress supremo said. Goons, antisocial elements and armed cadres are often referred to as 'harmads' in West Bengal.

Taking a dig at the BJP leaders, Banerjee said the BJP comes only during the elections just like a cuckoo bird in spring. She also claimed that the BJP leaders are trying to divide the state on communal lines.

"Where were they last year when the state was affected by floods?" she asked.

"These BJP leaders are like cuckoo birds who come during spring time. They are trying to divide West Bengal on communal lines," Banerjee said.

Ahluwalia is contesting the Lok Sabha polls from Burdwan-Durgapur constituency this time. "Here, you have a candidate for the BJP who tried to divide the state. Who created disturbances in Darjeeling?" she asked.

"He was the MP from Darjeeling, escaped from there and is contesting from here. Do not vote for him. If you do so, he will try to divide the state again," Banerjee said, adding that Ahluwalia is a "friend" of former Gorkha Janmukti Morcha (GJM) leader, Bimal Gurung.

"We have restored peace in Darjeeling but we will not let you disrupt peace in Burdwan," she said.

The BJP has fielded Ahluwalia against TMC's Mamtaz Sanghamita. The Congress has nominated Ranajit Mukherjee while the CPIM has named Abhas Roy Choudhury as its candidate from the Durgapur-Burdwan Lok Sabha constituency which will go to polls on April 29.