Our manifesto had a bunch of people, BJP's has only one man's face: Congress 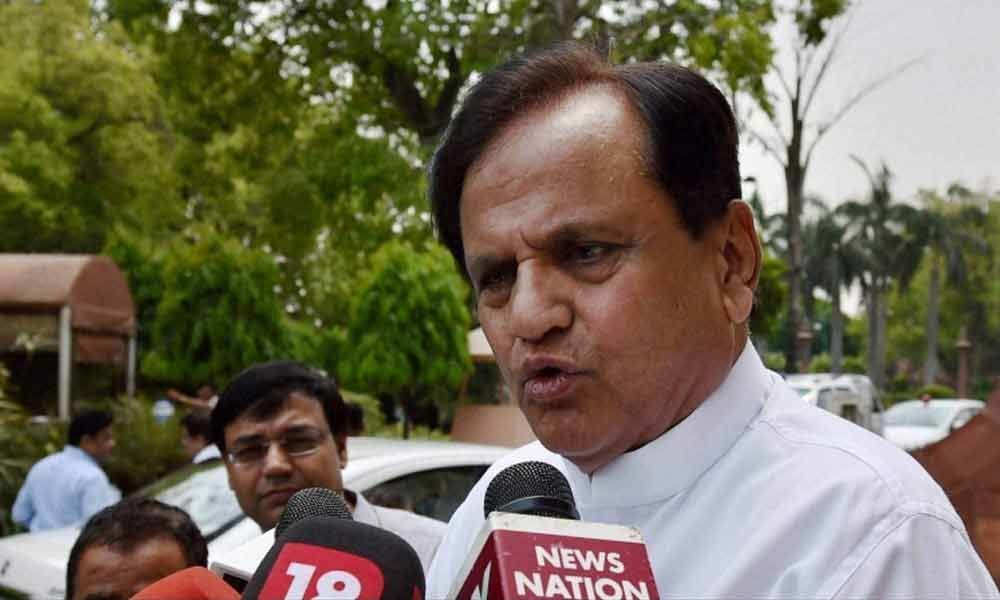 Rajya Sabha MP Rajeev Gowda said what this government achieved and failed to achieve in the last five years is something that comes through the manifesto very clearly.

NEW DELHI: The Congress on Monday dubbed the BJP's election manifesto a "Jhansa Patra" (deception document) and a "bubble of lies" and said it would have been better had they issued a "maafinama" instead.

Highlighting the Congress's thrust on promising justice to people if voted to power, senior Congress leader Ahmed Patel said the BJP document was "lies versus justice".

The Congress also released a list of 125 questions of "broken promises" made by the BJP in its 2014 manifesto, including key issues of jobs, 50 per cent rise in farmers' income, checking price rise and corruption and bringing back black money.

Patel said the Congress's manifesto had a picture of people, but the BJP document had only Prime Minister Narendra Modi on it's cover.

"On one hand is the public on the cover of Congress manifesto, while the BJP document has only Modi's picture depicting 'me and only me'. I feel this BJP manifesto is 'lies versus justice'. I feel it is lies and only lies.

It would have been better, if they issued an apology letter, as in the last five years they had nothing to show," he told reporters.

Patel said Modi and the BJP use "gimmicks and tricks" and also cited the acronyms like 'chaiwala' and 'chowkidar' used by the prime minister to describe himself.

"The people of the country understand you well and you stand exposed before them and thus they will not be won over by your gimmicks and lies anymore. You can befool some people sometimes and some people always, but all the people cannot be befooled all the time," he said.

"We have seen Modiji's journey which is from 'jumlas' (rhetoric) to 'jhansas' (deception). Today 125 crore people of the country are demanding answers from Modiji on 125 promises made before coming to power. People will not accept your 'Jhansa Patra' (deception letter) anymore and time has come for you to carry your bag and go," he said.

He also alleged that Modi has "poisoned" the confidence of the people in the government.

Surjewala said this manifesto of the BJP does not talk about Rs 15 lakh in every bank account, building smart cities, skill India and cheap petrol or diesel.

He alleged that under five years of the Narendra Modi government, the debt on the country has risen from 54.90 lakh crore to 82 lakh crore, a whopping rise of 27,12,940 crore.

In a scathing criticism of the BJP manifesto, Patel said the ruling party has "simply copy pasted" its 2014 poll document and changed all previous deadlines.

"Our manifesto has a crowd of people and the BJP poll document has face of just one man. Instead of a manifesto, the BJP should have come out with a 'maafinama'," the Congress Rajya Sabha MP said.

"After we presented our manifesto, we held a detailed question and answer session. And immediately after BJP presented its manifesto, all of their leaders went home without even taking a single question. No answers on their 5 years? It is this arrogance which will bring them down on May 23rd," Patel tweeted.

Congress spokesperson and Rajya Sabha MP Rajeev Gowda said what this government achieved and failed to achieve in the last five years is something that comes through the manifesto very clearly.

"Let us look at some of the key highlights in the economy section. What do we see - the contradictions that characterise this government are very evident right up front. They say they will reduce taxes and at the same time say they will increase tax collections. So, basically it is just a lot of 'Jumla' once again, but there are some omissions that hurt me very very much and that is while they do talk about 'kisan', once again there is absolutely no concern and attention paid to agricultural labour," Gowda said.

The prime minister Monday released the 45-page manifesto titled "Sankalpit Bharat, Sashakt Bharat" in the presence of BJP chief Amit Shah and other top leaders of the party, including Rajnath Singh, Sushma Swaraj and Arun Jaitley, three days ahead of the Lok Sabha polls.

Eyeing another stint in power, the BJP made a string of promises, including expeditious construction of a Ram temple, a firm hand in dealing with terrorism and doubling farmers income in the next three years.