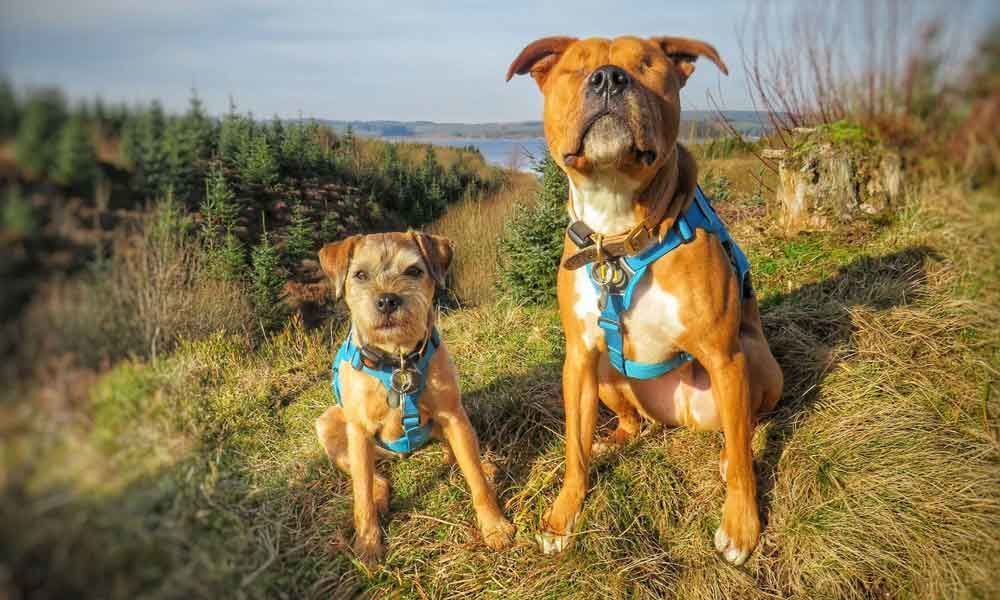 Owner Jess Martin says the pair have developed a "nice communication" and know each other's boundaries.

A Staffordshire bull terrier cross has formed a special bond with a dog who navigates him around and helps him find his water bowl.

Amos was born blind at a rescue centre and struggled to find a family.

But Jess Martin, a 27-year-old who works in HR for the Cheshire Fire and Rescue service, fell in love with him when she was volunteering at the centre and adopted him in August last year.

She was initially wary of how her border terrier, nine-year-old Toby, would take to his new brother.

He protects Amos from other dogs and gives him a nudge when he can't locate his water bowl.

"I thought it would be very difficult to find an owner and while Amos was on medical care for four months, we decided to foster him in February last year but after a while we realised we would never give him back," Ms Martin said.

"At the beginning Toby growled at him a few times and then ignored him - Amos came from a kennel so doesn't know how to socialise with other dogs.

"After a couple of days, I saw that Amos couldn't find his water bowl and Toby nudged him and helped him out."

Amos underwent an operation to have his eyes removed, and now puts his trust in his best friend Toby, who acts as his "bodyguard" when they go out on adventures together.

If he's in need of help, Amos simply gives Toby a nudge.

Ms Martin continued: "When we went out on walks Amos was very scared, especially of the noises and Toby quickly picked up that he needed help - so every time Amos was stopping, Toby would go and lie next to him till he would be ready.

"They have developed a nice communication between them, and they know each other's boundaries.

"Amos's main problem is that other dogs don't like him when they approach him, obviously because he cannot communicate the same way, so he doesn't have other friends.

"But Toby is always there to protect him - we call him his bodyguard."