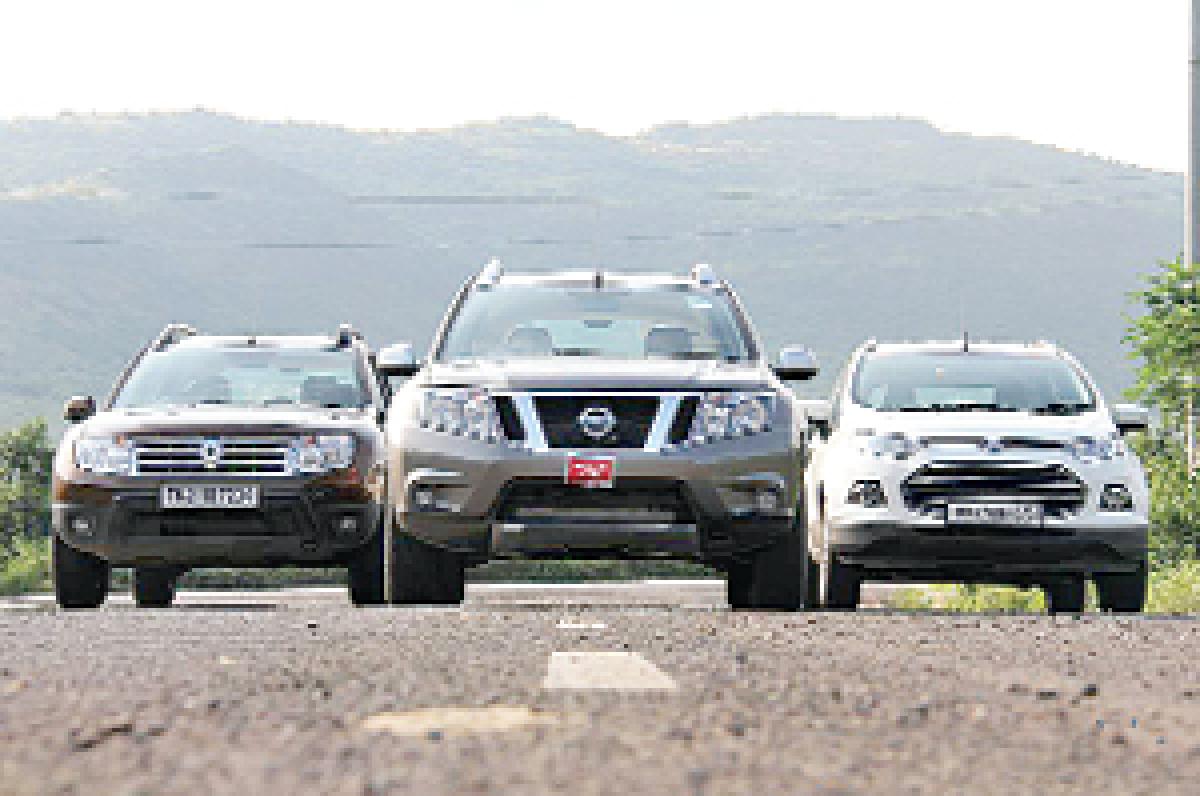 Bade Achhe Lagte Hain. A decade ago lives were much simpler when we had to buy a car. Like everywhere else on the planet, even India had three basic segments to choose from; hatch sedan and SUV. A decade ago lives were much simpler when we had to buy a car. Like everywhere else on the planet, even India had three basic segments to choose from; hatch sedan and SUV. But now manufacturers introduce new trends by creating all-new segments bang amidst the existing ones. Compact sedans, compact SUVs, cross, etc are all new segments created by manufacturers with an intention to sell well. And after witnessing the success of the first few, the rest followed the suit and now it is a lineup of whole new products in these segments hitting the market… monkey sees monkey does.

First there was the Swift Dzire, which turned a raft of Tata admirers into Maruti fans, then came the Renault Duster to lure buyers out of the seats of Tata Safari, followed by the upcoming Creta to bother the sales of Ford EcoSport. Now there's this, the all-new S-Cross, which threatens to cause some furrowed brows of the rest in the game.

It is quite sad, that all, almost all… took a dig at Tata, which accidently made the most outrageous thing in the Indian automotive industry. Thy name is the Tata Indigo, a car that created the segment which read ‘compact’, though the first impressions among enthusiasts were ‘ugly’.

In 2002, when Tata took a ballsy move and stretched the Indica’s butt (read boot) and making it look as fake and desperate as Kim Kardashian, even the designers didn’t have an inkling that they were creating an illustration to be followed by the coming generation sans inspirations for the rest, who waited to bank on the idea. In a country as uncanny as India the idea struck the right chords, for the car was relieved from the excise duty for being less than four-metre mark.

But then, what got the maximum out of the idea wasn’t the Indigo, it was the Maruti Suzuki Swift Dsire. When Maruti pasted a boot to its looker Swift, enthusiasts like us disapproved the design, but couldn’t argue on practicality. A decade down the line, compact sedan became a trendsetter and players like Honda, Hyundai and even Tata invested in this idea with their products Amaze, Xcent and Zest, respectively. Even the purveyors of totemic, ballistic muscle cars, Ford and Chevrolet will soon be joining the party with Figo Aspire this month, and Beat sedan by 2017, respectively.

Now compact sedans are not really good looking. In fact, most of them look quite weird from various angles as they were originally designed to be hatchbacks. Manufacturers also try hard to squeeze the vehicles’ length to under 4-metres to comply with the Government’s norms for tax benefits that these compact vehicles get. So the end result is that the compact sedan ends up looking mashed, doesn’t get anything extra than their hatchback counterpart apart from the boot and it still sells like a hot cake. No matter what it looks like, the market still perceives it as a sedan and as we already know, sedans have a higher amount of snob value when compared to hatchbacks.

Large barge SUVs, land yachts if you will, occupy a special place in the male psyche. For some of us, they’re the ultimate fantasy cars. Many imagine barreling down a highway in them, towering over low-slung sedans, parking them in front of our farmhouses where guests can’t miss them. They’re the wheels the alpha males in The Expendables drive. These beasts are not urban runabouts.

With such an aura connected to an SUV, Renault flipped the scenario with the launch of Duster. The car wasn’t much of a shrinked SUV and did look beefed enough (compared to cars like Tuscon or Terracan- which were full-fledged SUVs), but then, it was the engine they played along with. Duster did not have mightly two and three litre engines under its hood, but had something as much two packets of milk or a bottle of juice.

When we test-drove the smallest SUV, the compact Duster, we wondered why Renault decided to go small. The answer was somewhere else, you probably haven’t heard luxury carmaker Bentley, which ditched the massive W12 engine and opted instead for a V8 on its 2014 Continental GT. A trend was set, and the next to join this bandwagon was Ford with its EcoSport.

The later addition to this segment was more or less as hatchbacks on stilts, a la Ford EcoSport, but still, the end result was that the market called it an SUV no matter what, and this is the thing that mattered the most. People loved buying SUVs just for the sheer road presence and when they see that they can get one for the price of a premium hatchback or a C-segment sedan, it is a guaranteed success story. These compact SUVs from Ford, Renault and even Nissan are highly-preferred than the desi ones like the Tata Safari and Mahindra Scorpio even though these can be called full-sized SUVs.

Even Hyundai joined this catalog and has come up with probably one of their best product, the ix25 or Creta that remains our personal favourite as it is the best looking car in the segment. It is equipped with features as much as in Dora’s backpack. We won’t be surprised if on a fine day an owner takes out a tank from the trunk of the car.

But then, we cannot judge soon, as Mahindra is already testing mules of its upcoming compact SUV whose spyshots have appeared more than Ranbir and Katrina’s Ibiza holiday. Another rumour is that Honda will also be cooking up a compact SUV based on Brio like it had made the Mobilio and Amaze, back in the day.

Well, on a personal opinion, explaining the Duckworth Lewis method might sound heaven to ears than explain the exact definition of crossovers in the Indian market due to its acute similarity with compact SUVs. While for the rest of the world compact SUVs are in the league of crossovers, in India we have our own definition.

Broadly labeled as ‘crossover’, these are also being called the CUV or the Crossover Utility Vehicle. As the name suggests, these are another form of the SUV or the MUV, but a type that makes a shift over from a traditional form to a new one. Essentially, these are based on the same platform as a regular car, usually a hatchback, and blends in the features prevalent in the original vehicle along with those that are seen in an SUV. To scrutinise the names that are on the popularity charts as far as the crossover cars in India are concerned -

One of the earlier introductions was by Fiat when they introduced the Palio Adventure which was, essentially, a crossover from the Palio. The Italian giant recently launched a brand new model, the Avventura, a cross from the Punto this time.

First showcased at the 2014 Delhi Auto Show, the Avventura Concept appeared to be a tougher extension of their Punto hatchback. The sub-4m Avventura Concept has been given extra plastic cladding around to get that beefy look.

The Volkswagen Cross Polo comparatively restrained changes on the outside in comparison to its hatch sibling. The side cladding was not as beefy as it should have been and nor it got a grille guard. Volkswagen cars are great in terms of handling and ride quality, and the Cross Polo was no different.

The Etios Cross was also based on the same platform as the Liva hatchback and the Japanese car maker did a great job in making it look more muscular and robust. The Etios Cross featured a uniquely designed front grille with silver grille guard and chin that was edged by the fog lamps to give that ‘crossover’ look and feel.

But then, one of the best to look upto in the current scenario is the Renault Kwid. The Kwid first appeared as a concept at the Delhi Auto Expo last year, but has been tamed so much for production, it’s practically unrecognisable. Aimed initially at the car market in India, the production Kwid uses the new Renault-Nissan CMF-A platform to create a rufty-tufty little urban crossover, with suitable bits of added butch cladding and a raised ride height to cope with less than perfect roads. And, in India, it looks set to cost from around Rs 4 lakh. A car which promises to be a cross and distinct with a price this less, Kwid has stirred up quite an excitement. A proud moment of India as well, as the vehicle will be made in India for the rest of the world.

And finally, to the showstopper, Maruti Suzuki’s S Cross, which will make its debut on Wednesday. Seen purely as a premium car, it ticks most of the right boxes – it’s well equipped, has a strong engine, a high quality cabin, loads of space and pretty good comfort as well. Maruti, as always, is sure to price it aggressively too, which may give it a big advantage. Above all the car sold only via NEXA Showrooms of Maruti, which promises something premium.

To end with - the writing’s on the wall: Downsizing is the trend – and this includes smaller engines, as well as more compact bodies. Carmakers are focusing on smaller, more efficient and cheaper rides that give you more bang for your buck.