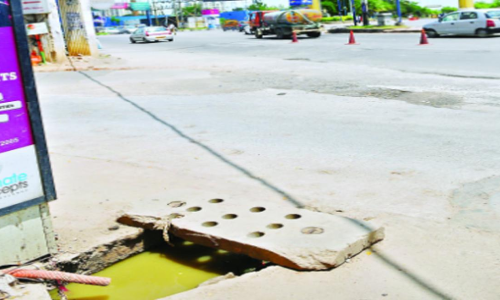 In spite of five manhole deaths reported in the last three months, the Hyderabad Metropolitan Water Supply and Sewerage Board (HMWS&SB) has not woken up to the dangers posed by open manholes. The least that the Water Board could do is to place sign boards and barricades, say citizens.

​Hyderabad: In spite of five manhole deaths reported in the last three months, the Hyderabad Metropolitan Water Supply and Sewerage Board (HMWS&SB) has not woken up to the dangers posed by open manholes. The least that the Water Board could do is to place sign boards and barricades, say citizens.

Incidentally, the five manhole deaths were reported from Madhapur (four from Ayyappa Society and one from a nearby area), but even today, less than 800 metres away from the Ayyappa Society, an uncovered manhole has been posing danger to commuters near the Hitex junction in the same area.

During the last week, a manhole near Ayyappa Society in Madhapur had claimed four lives. Two workers, who were cleaning a manhole at a depth of 20 feet, fell unconscious after inhaling poisonous gases. Two more persons who entered the manhole to save them also got trapped and died. In another incident during June this, an uncovered manhole claimed the life of a 24-year-old tea vendor in the same area.

Even after Municipal Administration and Urban Development (MA&UD) Minister assured to put an end to uncovered manholes, the ground level Water Board and GHMC officials have turned a blind eye to the issue. Several killer manholes were found near Chaitanyapuri in Dilsukhnagar, Madhapur, Tolichowki and others parts of the city.

Sharing his experience, B Sandeep Kumar, a 26-year-old software engineer said that it was impossible to trace the manhole during nights. “On one hand, the GHMC has been assuring that they would cover all manholes in the city but the ground level staff do not seem to be bothered to at least set up a sign board to alert the public,” he said.

Md Aslam, a resident of Madhapur, said that the uncovered manhole opposite Hitex junction, had the potential to claim lives. He said he himself had a narrow escape recently. He said despite several representations to the Water Board authorities, there had been no response.

There are 4.70 lakh manholes and catch pits in the GHMC limits, of which 2.70 lakh belong to the civic body and the rest to the HMWS&SB. The entire sewerage network in the peripheral areas has been maintained by the Water Board.