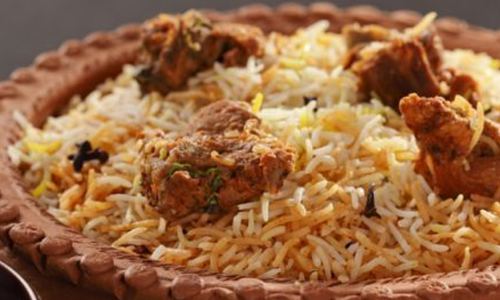 At a time when online food ordering has become the new normal for millennials and working couples, piping hot biryani has come out of the oven in a big way, emerging as the mostloved comfort food across Metros and suburbs in the country

At a time when online food ordering has become the new normal for millennials and working couples, piping hot biryani has come out of the oven in a big way, emerging as the most-loved comfort food across Metros and suburbs in the country.

Like the way pizza and burger orders flourished, online food delivery platforms have now crowned biryani as the king of most-craved dishes.

"Compared to 2017, there was a whopping 681 per cent increase in biryani orders on Swiggy in 2018 -- that is one biryani ordered every 3.5 seconds," the online food delivery platform told IANS.

While pizzas, burgers and cakes were the most searched food items last year, chicken biryani remained the most ordered dish during festivals, lunches, dinners, snack time and late-night slots across the country.

Witnessing the growing demand, opening a biryani house is one of the top choices for entrepreneurs who wish to invest in food start-ups.

Often priced by the kilo, the delicacy is served by big hotel chains, quick-serve restaurants (QSRs), Cloud kitchens as well as take-away joints -- categorised in over 10 regional variations and the most popular ones being Hyderabadi, Lucknowi, Calcutta, Malabari, Bombay, Awadhi and Tehari.

According to Sagar Kochhar, Chief Marketing Officer (CMO), Rebel Foods which is the parent company of Behrouz -- India's largest online biryani brand -- biryani consumers have become a lot more extreme in terms of preferences.
"They want to indulge in great food experiences and they do not eat just with the purpose of filling their bellies," Kochhar told IANS.

Since hot and fresh biryanis come in larger quantities, it is often ordered in bulk at workplaces, parties and events as a total value-for-money cuisine.
"Biryani, influenced by the Persian culture, allows people to indulge in gastronomy to savour the relationship between food and culture," Kochhar added.

With consistent yet versatile cooking techniques and personalised presentations, the convenience of online food ordering mediums has filled in the blank that once lay in between street-side biryani places and home-cooked options, with several new choices.

"Biryani has got momentum with the mushrooming of online platforms and with millennials consuming it the most.

"Biryani is also region-specific and a Bengali will prefer Kolkata biryani and a Tamilian will go for Chennai-type biryani. We are devising new marketing strategies to attract millennials via Facebook and Instagram, etc," K. Umamaheswaran, Founder of Kolkata Biryani House which has branches in Delhi-NCR, told IANS.

Hyderabad retains its position as the biryani capital of India. Food lovers in India even declared October 28 as the "National Biryani Day" last year by placing highest number of orders (on Swiggy) for the dish that day.

According to Sandeep Anand, Chief Marketing Officer (CMO) of Zomato, biryani orders have increased more than 10 times on the platform.

"Chicken biryani has been the most-ordered dish on our platform for two straight years. The numbers are destined to only grow further with more and more biryani outlets opening-up with interesting innovations to the dish," Anand noted.

However, unlike famous pizza, burger and cake brands with pan-India presence, there are not many biryani brands yet which could be recognised as national biryani serving brands.

Nonetheless, several popular online brands like Behrouz, Biryani By Kilo, Biryani Blues and others are busy serving the palate and taking the legendary mouth-watering dish -- once limited to a few known restaurants -- right at your doorstep.