Our role as countrymen 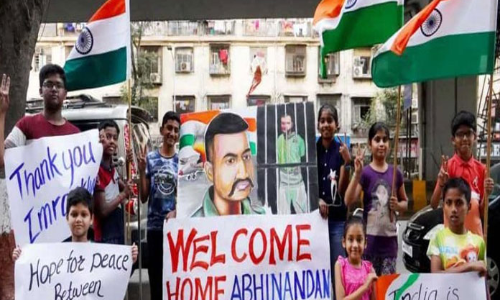 The country is under the grip of warlike situation which has incurred one individual from India was indoctrinated to kill himself in order to kill...

The country is under the grip of war-like situation which has incurred one individual from India was indoctrinated to kill himself in order to kill another forty. Some where someone has failed to perform his solemn duty which has resulted in two countries facing each other with weapons.

We as countrymen should follow the following:
Ruling Party: The head of your party has shown what India can do if someone attempts to kill innocent people and has been amply proved across world and within. There is no need to again tell our own people and until situation turns back to normal, give a break to send across political message as it can always be given when elections are around.

Opposition parties: The heads of the respective should show the courage of being with those who are fighting for us in border, sky and water. Be with the people and spread a message to motivate our forces. Leave it to the people to judge the way party in power is using the crisis. Maintain Silence and spread it rather encouraging the noise.

Government employees: Do your duty honestly and efficiently as you are working for the country and its people whose tax money is what you are getting salary. Give a break from taking money as someone like you has only shown carelessness by taking money has led our country to face war like situation. Terrorist are killing our people all because many of you have killed your conscious.

Businessmen: It is not the time to take make money using name of armed forces. Be honest and do not attempt to hoard essentials for he sake extra profit and don't dodge the standard operating procedure to achieve your targets as some car dealer may have done in Kashmir by not keeping record of the person bought that deadly car.

Aam Aadmi: This is time you must show your real intelligence and do not be carried away by netas who would come to talk about patriotism and would attempt misguide may even invite you join them to celebrate war. Remember the very aptly used line by journalist "Those who Celebrate War Never Participate in War; Those Who Participate in War never Celebrate War". The families who send some of their family to join Armed forces is for making a living and not for dying.

Ex-servicemen: You are a great source for the country and one of the strongest pillars of our country. You have given your best when in service and many of you would have seen war and participated in action. You don't waste your time by appearing in channels who use you to increase their viewership. Share your experience in other ways

Media: You have very big responsibility to keep people of the country to stay united and don't use your studios turn into national and anti-national. There is no better ammunition for the enemy country to spread false and mistrust among our own countrymen through rumours and fake news. If you want to fight false propaganda by enemy country, think about something on the lines of "Radio Jhootistan" used by government during conflicts in 1962, 65 and 71 as counter. As united India we have won many battles over the last seven decades and we can win even the present one.

Let peace reign in the region

It’s very happy news that Indian Air Force pilot Wing Commander Abhinandan Vardhaman, now in Pakistan’s custody, would be released. And we should appreciate statement of Pakistan Prime Minister Imran Khan that is “As a peace gesture, we are releasing the captured Indian pilot tomorrow,”. That means Pakistan also wants peace in the world. In this connection all major countries have to discuss on the international stage to wipe out terrorism from the wold.

Once we put pull stop to the terrorism, then all countries can reduce their budget allocations for defence. That allocations may transfers to welfare activities to the poor people for their countries to give proper education and employment. These are the main reasons for the growth of terrorism. Then gradually terrorism will disappear from the world and then we can make the world laden with peace and harmony. In this situation we have to remember the words of Mahatma Gandhi “An eye for eye only ends up making the whole world blind.”

The announcement on the floor of Parliament by Prime Minister Khan that Pakistan would release Wing Commander Abhinandan Vardhaman is indeed good news. Captured by the villagers, he was badly beaten before being rescued by an officer of the Pak army. The concerned army major too heeded the Geneva convention and we should be grateful to him.

If Pakistan has seen sense in releasing the captured IAF pilot, it needs to be appreciated as a peaceful gesture rather than a comedown, which is not the case. India asserted that no concessions were made for the release of the captured pilot.

Having seen the recent war scenario, the above caption flashed to my mind - the well coined slogan of Indira Gandhi. With the release of Abhinandan, the whole nation breathed a sigh of relief. The PM of Pakistan announced that the release is on humanitarian grounds. He further said the peace gesture is not a sign of their weakness His expression of this kind is unbecoming of a person in his position.

All nations condemned violence and terrorism and support us in our fight to root out terrorism. Our world history stands as a testimony that what we cannot gain by sword, can be gained by peace, love and affection. We should not befriend with any nation that supports and patronises violence. Pakistan has been a thorn in Indian flesh since bifurcation of the nation. Indians are self-disciplined and peace loving. We should cut off our commercial interaction with any nation that supports violence.

Indian army, Air Force and Navy are the real heroes and I salute them. All the three forces should be alert not to yield to the honey coated dialogues of the terrorist nations.