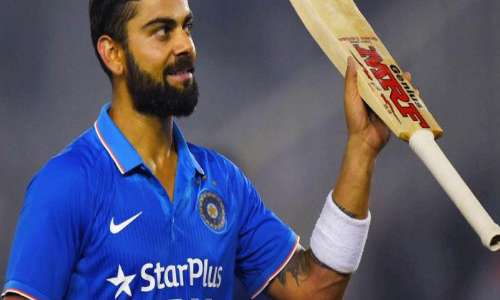 Skipper Virat Kohli leading from the front scored not only scored a magnificent century but held the fort at one end to enable the team reaching a...

Skipper Virat Kohli leading from the front scored not only scored a magnificent century but held the fort at one end to enable the team reaching a reasonable total by engaging in a useful partnerships enabling India script a thrilling win. Not lagging behind is the excellent performance with both bat and ball by young Vijay Shankar who is shaping himself to be an able allrounder.

Despite a slow start, full marks for Kohli for steering India to a win. Even though Aussies's run chase was faster, it is only effective bowling by Bumrah, Kuldeep and mesmerising spell by Vijay Shankar in the final over that turned the tide in India's favour. Kudos to Kohli and his boys for the second successive win. Let us wish that India team continue its good run in the remaining three matches to win the series in style.

This refers to the exceptional victory of the Team India in the second One Day International Match played against Australia at Jamtha. Kudos to Team India for accomplishing its 500th win in the One Day International (ODI) Matches after achieving an exceptional victory in the second ODI, played against Australia at the Vidharbha Cricket Association Stadium (VCA), Jamtha.

The Indian skipper Virat Kohli who smashed his 40th ODI century must be lauded for taking the team to a handsome total of 250 runs on the tricky pitch of the VCA despite the early dismissals of the Indian openers and a failed middle order. The Indian bowling line up should be given credits as well for their astonishing spells.

Kuldeep Yadav, Kedar Jadhav and Ravindra Jadeja bowled exceptionally well and gave strong breakthroughs to the Indian Team but the wicket of Marcus Stoinis taken by Vijay Shankar in the last over was the most notable admirable. Vijay Shankar who has also been impressive with the bat must have jogged the memories of the selection committee regarding his existence in the playing XI of the forthcoming ICC Cricket World Cup owing to his consistency in the game.