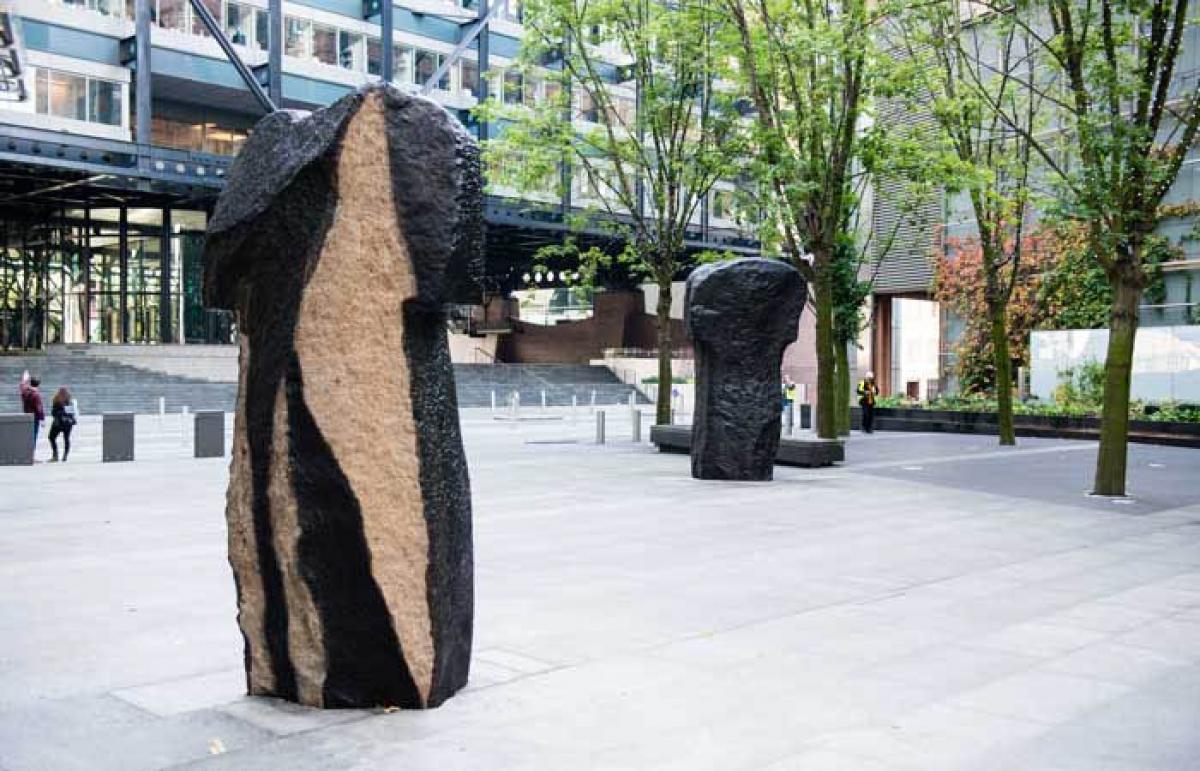 Stephen Cox, Royal Academician and one of the highest profile international artists working in India, today​ attended the re-installation in Broadgate ...

Stephen Cox, Royal Academician and one of the highest profile international artists working in India, today​ attended the re-installation in Broadgate Plaza in the City of London, of one of his most significant works to come from the Subcontinent - Ganapathi and Devi - a monumental two-part carved granite sculpture built in 1988 from the quarries of Mahabalipuram in Tamil Nadu. ​​

The unveiling begins at 12 pm UK time (5:30pm India Time) with informal speeches by Stephen Cox and Tim Marlow (Artistic Director of the Royal Academy.)
Monolithic in scale and semi abstract in style, these works make reference to torso forms. Contemporary, and yet ancient in inspiration, the statues fuse periods of history and ancient civilisation with emblems from our modern world. Weaving together complex themes, Cox presents the viewer with a representation of the female Hindu goddess Devi set alongside a second stone Ganapathi, the South Indian name for the popular elephant god Ganesha. Distinct in proportion and colour, the two pieces stand within their own defined space and yet are inextricably linked.
The re-installation of the work follows the recent unveiling of Relief: Figure Emerging, to EL in Apple Tree Yard, St James’s Square, in London (the site from which the architect Edwin Lutyens worked on the plans for New Delhi), and comes in advance of plans for a significant India retrospective exhibition planned for early 2017.
Born in Bristol, Cox attended Central School of Art and Design in London. Widely traveled and greatly influenced by varied cultures, notably Italian, Indian and Egyptian civilisations, Cox has undertaken important global commissions including those for the Foreign and Commonwealth Office in London, the British High Commission in Canberra, the British Council in New Delhi and Cairo Opera House. Throughout his oeuvre Cox employs local carving techniques and makes use of the indigenous materials including alabaster, marble and porphyry. He lives and works in Shropshire, England and also in India.
Stephen Cox will be visiting Delhi in January 2016 and is available for interview.
Show Full Article
Email ArticlePrint Article
More On
Download The Hans India Android App or iOS App for the Latest update on your phone.
Subscribe
Subscribed Failed...
Subscribed Successfully...