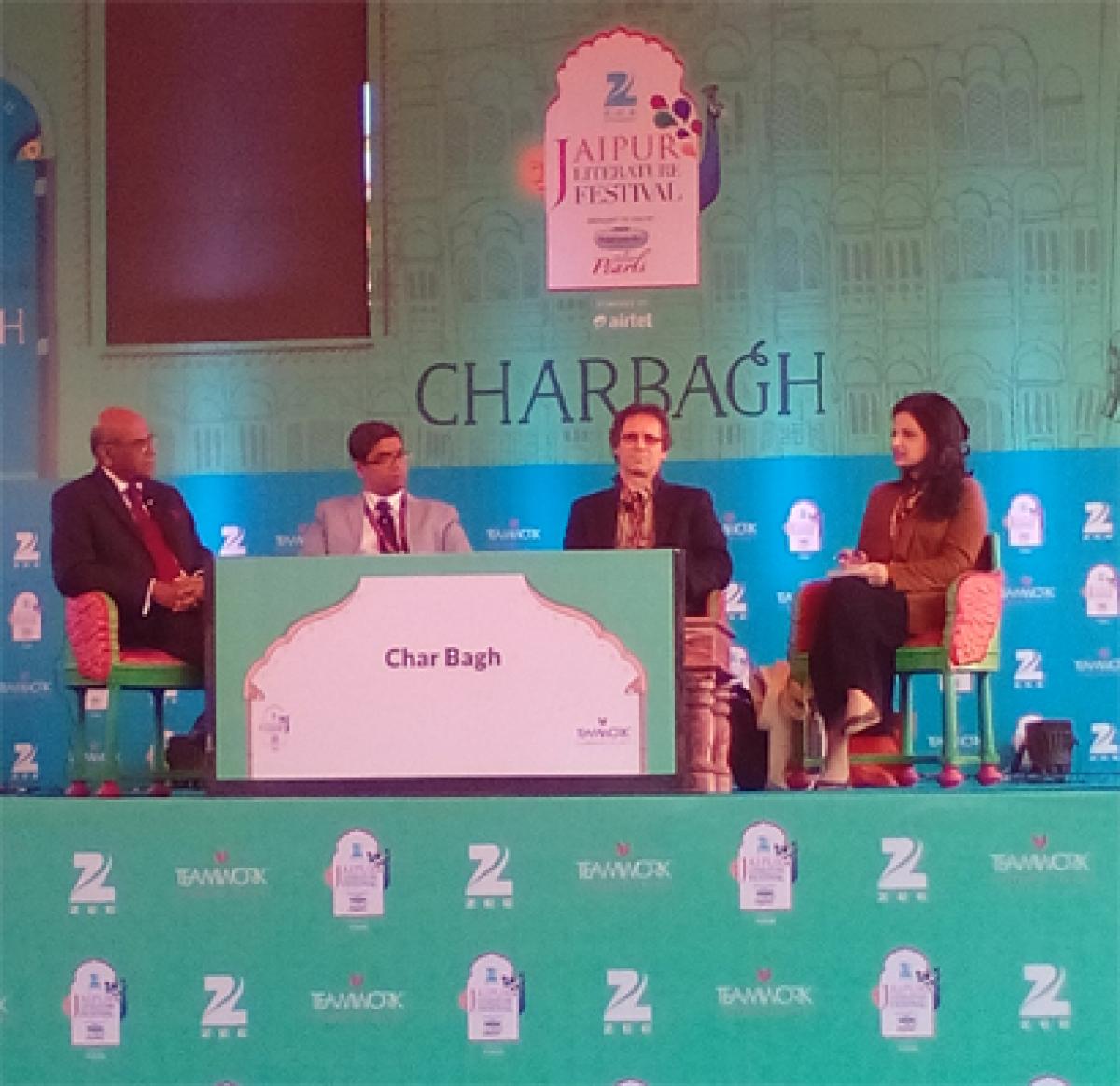 There is a change in Pakistan where the civil society is slowly gaining ground, but the world needs to change its policies towards the country to make it self-reliant, instead of bailing it out, say experts on Pakistan.

There is a change in Pakistan where the civil society is slowly gaining ground, but the world needs to change its policies towards the country to make it self-reliant, instead of bailing it out, say experts on Pakistan.

They also maintained there is a need to be more realistic on India-Pakistan relations are concerned, given the competing, conflicting narratives of history in both the countries make any sort of "grand reconciliation" not possible in the short-term, though increasing contacts among the youth offer hope.

In a session titled "The Pakistan Paradox" on the opening day of the Jaipur Literature Festival here on Thursday, moderated by former Indian foreign secretary Shyam Saran, they also discussed the likely course of Pakistani nation could take, and what the rest of the world must do.

Pakistani journalist-cum-author Reema Abbasi said it was unfortunate that other aspects of the Pakistani life and society were being ignored with everything seen through the focus of terrorism, though she conceded it was a major issue.

The author of "Historic Temples in Pakistan: A Call to Conscience", she stressed recovering the plurality of Pakistani society.

"Very few students in Pakistan know about the plurality of their country," she said.

She also contended that there were two narratives in Pakistan, "completely at odds with each other", but the state's narrative was paid more attention by the international community over the public narrative, but this had "completely changed", especially after the attack on the Peshawar school in December 2014.

"Civil society, activists and media are getting more empowered," she maintained.

French South Asia security expert Christophe Jaffrelot, author of "The Pakistan Paradox: Instability and Resilience" (2015), maintained that Pakistan, where now a broader establishment of the military and some political leaders still held sway, still offered plenty of paradoxes and complications but it had become a sort of a "nation state" by now, having gotten over its fixation over defining its identity based on India as an hostile "other".

"India was a threat to Pakistan in the 1970s... today its more complex. Balochistan is gone, Karachi is a complicated game but the rest is some kind of nation state... time has made a contribution."

Jaffrelot also maintained that as far as India-Pakistan relations were concerned, Afghanistan was a key issue.

"Pathankot and Mazar-i-Sharif (attacks on an Indian Air Force base in Punjab and consulate in Afghanistan) came after (Indian Prime Minister Narendra) Modi's visit to Kabul, where he had offered the Afghans military helicopters," he noted.

"This was not taken in a very good way by Pakistan army, who have a constant temptation to use jihadi groups against India," he said.

He also noted that while Pakistan acts against some militant groups that "have gotten out of hand", it can set up new ones.

Jaffrelot also contended that the world must change its policy towards Pakistan, which was at a significant crossroads of South Asia, Central Asia and the Middle East.

"Apart from remittances from Pakistanis in the Gulf, outsiders pay for Pakistan, be it the US, Saudi Arabia, IMF and China," he noted, urging the world powers to "stop helping Pakistan in the way you are".

"Its tax-GDP ratio is the lowest in the world. It needs to focus on fiscal reforms," he said.

Shyam Saran noted that Pakistan was the only country that figured both in China's "Silk Road Economic Belt" and oceangoing "Maritime Silk Road".

US-based history professor Venkat Dhulipala, meanwhile, contended that the idea of India as a "threatening outsider that keeps Pakistan united was oversold".

Dhulipala, author of the critically acclaimed "Creating a New Medina: State Power, Islam, and the Quest for Pakistan in Late Colonial North India" (2015), argued that Pakistan sees itself on the way to its pre-eminence in the Islamic world based on its possession of nuclear weapons, and this was also becoming a "driver for Pakistani politics".

Stressing that the world must take this into account, he also appeared pessimistic of India-Pakistan ties give the stress of competing narratives of history.