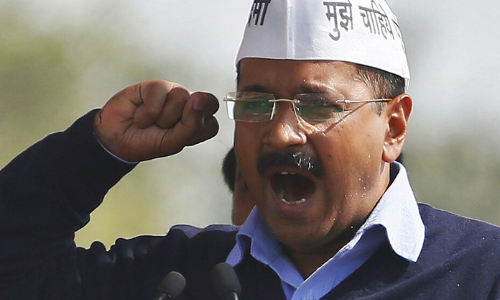 Carrying Chief Minister Arvind Kejriwals letter addressed to Delhi people on full statehood demand, one thousand teams of Aam Aadmi Party will launch the Lok Sabha campaign of the party across the city on Sunday

In his letter to Delhiites, the AAP supremo has charged the Congress and BJP of betraying people on full statehood. He has urged them to vote for the AAP in Lok Sabha polls so that full statehood could be achieved.

“AAP’s 1000 teams will take out morning processions and evening marches to tell people how their rights are being denied due to lack of full statehood,” said Delhi AAP convener Gopal Rai.

Kejriwal’s letter addressed to the people attached with a list of benefits of full statehood to Delhi will be distributed during the campaign, said Rai.

“Despite being the national capital, why is Delhi not clean? Why are Delhi's women not safe? Even after securing 90% marks, why are students unable to get admission in Delhi colleges?

Why is the youth unemployed? Why are many colonies still unauthorised? Why are thriving markets being sealed?,” Kejriwal asks people in his letter. There is only one reason - Delhi is not a full state., he replies in the letter.

Many agencies dealing with everyday problems of the citizen like MCD, Delhi Police are under the direct control of the central government. The citizen of Delhi have no say in these matters, he claims in his letter.

“There’s only one solution to these problems - just like every other state, Delhi should also get full statehood. All agencies serving the city should come under the Delhi government.

“The letter also promises that once Delhi becomes a full state, the dreams and aspirations of the citizen of Delhi will be fulfilled. Women will be safe and secure as law and order will improve.

Our youth will get jobs. Students securing 60% and above will also get admission in Delhi colleges. Sealing will come to an end. Each citizen will have their own house in Delhi. Delhi will become clean and beautiful. Delhi will grow and develop at a faster pace,” the letter said.

Both the BJP and Congress promised that Delhi will become a full state. Before becoming Prime Minister, Modi had also promised to give full statehood to Delhi, it says. “Last time, you voted to elect the Prime Minister of the country.

But this time, vote for full statehood of Delhi. Destiny and God give us only one chance. This time let’s make it count. This time vote for Aam Aadmi Party so that Delhi gets a full statehood,” Kejriwal signed off his letter.