Rohit, Shami back; Dhoni gets nod 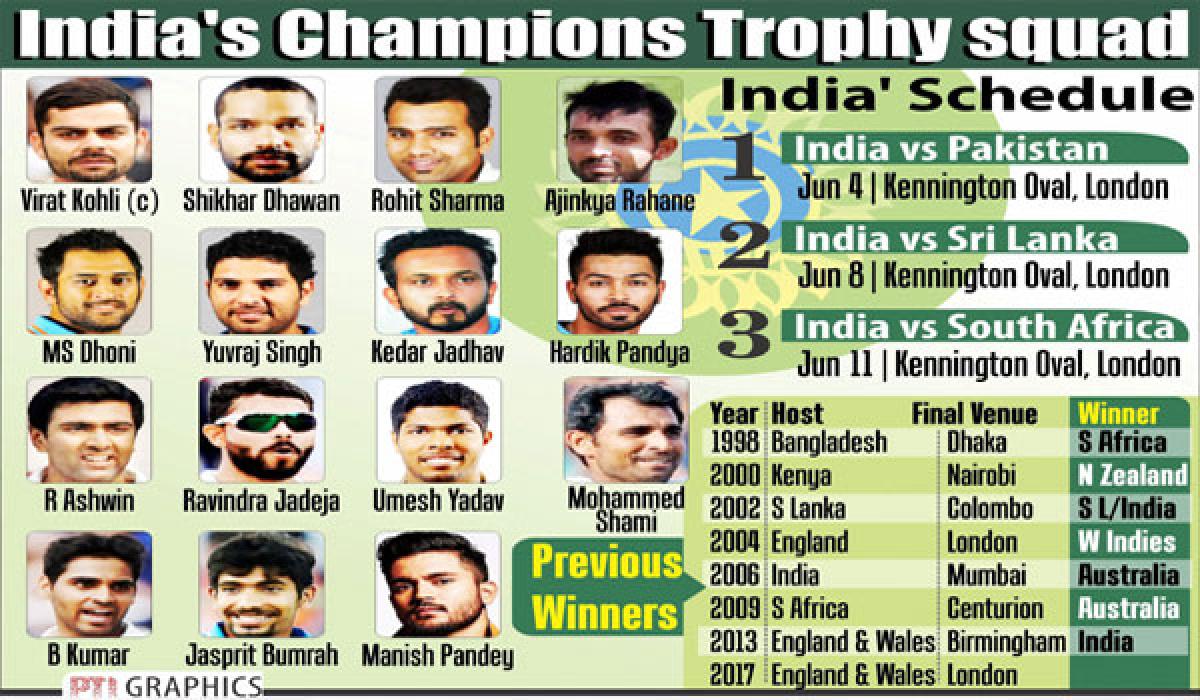 The fit-again duo of Rohit Sharma and Mohammed Shami was on Monday recalled to the 15-member India squad for next month\'s ICC Champions Trophy, as the cricket selectors also reposed their faith on talismanic wicketkeeper-batsman Mahendra Singh Dhoni\'s abilities.

New Delhi: The fit-again duo of Rohit Sharma and Mohammed Shami was on Monday recalled to the 15-member India squad for next month's ICC Champions Trophy, as the cricket selectors also reposed their faith on talismanic wicketkeeper-batsman Mahendra Singh Dhoni's abilities.

BCCI's chairman of selectors Prasad had no hesitations in calling the former India skipper "the best stumper" in the world despite his erratic run with the willow in the ongoing Indian Premier League (IPL)."We all believe that he is still the best wicket-keeper in the world. He is invaluable to the team in terms of inputs," Prasad told reporters after BCCI joint secretary Amitabh Choudhary announced the Virat Kohli-led squad here.

"He is the best person to guide Virat. In the past 10-plus years that I have seen when he has played for India, he has never had a bad day as far as gloves are concerned. The phenomenal performance he puts in behind the wicket, nobody looks at that," he added.

Besides Rohit and Shami, off-spinner Ravichandran Ashwin also made his way back after a brief injury lay-off.While Rohit sustained a thigh injury during the One Day International (ODI) series against New Zealand in October last year Shami's last appearance in ODIs was in the 2015 World Cup semi-finals. Ashwin, who suffered a sports hernia, was also advised six-to-eight weeks of rehabilitation after a gruelling Test series against Australia.

With no surprises in the team, Prasad said it was easy to pick the squad as it has shaped up well in the last four months.
"May be, one place here and there. But this is the best side."On including Ashwin without testing him in a match situation, Prasad said the Chennai tweaker's injury was not serious and he merely required some rest."The injury was not serious. The (IPL) franchise was magnanimous enough to listen to our request to rest him. Rest is what Ashwin required as the last game that India played, he was there. That shows he is fit and not like others who are getting rehabilitated after surgery," Prasad said.

The chief selector also responded in the negative when asked if skipper Kohli or all-rounder Ravindra Jadeja needed some rest from the IPL, considering their respective teams are out of the race to the IPL play-offs. While Virat's Royal Challengers Bangalore (RCB) are at the bottom of the standings, Jadeja's Gujarat Lions are two spots above RCB at sixth.

"Virat didn't play the last Test (against Australia) and also the first few matches in IPL. The more he plays, it is better for him. We have also given Jadeja a break. (But) considering how fit he is, it wasn't a problem," he said. While an in-form Gautam Gambhir failed to grab the attention of the selectors, the other senior members -- Suresh Raina and Dinesh Karthik -- were, however, kept as standby players alongside the young trio of Rishabh Pant, Shardul Thakur and Kuldeep Yadav.

"As of now, we have picked Shikhar Dhawan and Rohit Sharma as openers and Ajinkya Rahane is the back-up opener," Prasad replied when asked about Gambhir.The stand-by players will be issued visas and will practise at the National Cricket Academy in Bengaluru, Prasad said.

Explaining the reason behind Pant and Kuldeep's omission, Prasad said: "We are completely impressed with Rishabh Pant. But he missed out because of squad combination. We will groom him for the future.""We definitely considered Kuldeep. He would have been a surprise package but whether we would have played with two spinners is a question. Since Yuvraj (Singh) and Kedar (Jadhav) can bowl spin, he narrowly missed out," Prasad added.

Prasad further said that the panel not only banked on the performances in the IPL but also the past year while selecting the squad."We respect IPL but in the longer format, we have to also consider the English conditions that we are playing in. Not just IPL but one needs to take into account the performance of last one year also in such a big tournament," Prasad said.
The eight-team tournament will be played in June, with defending champions India pooled with South Africa, Pakistan and Sri Lanka in Group B.