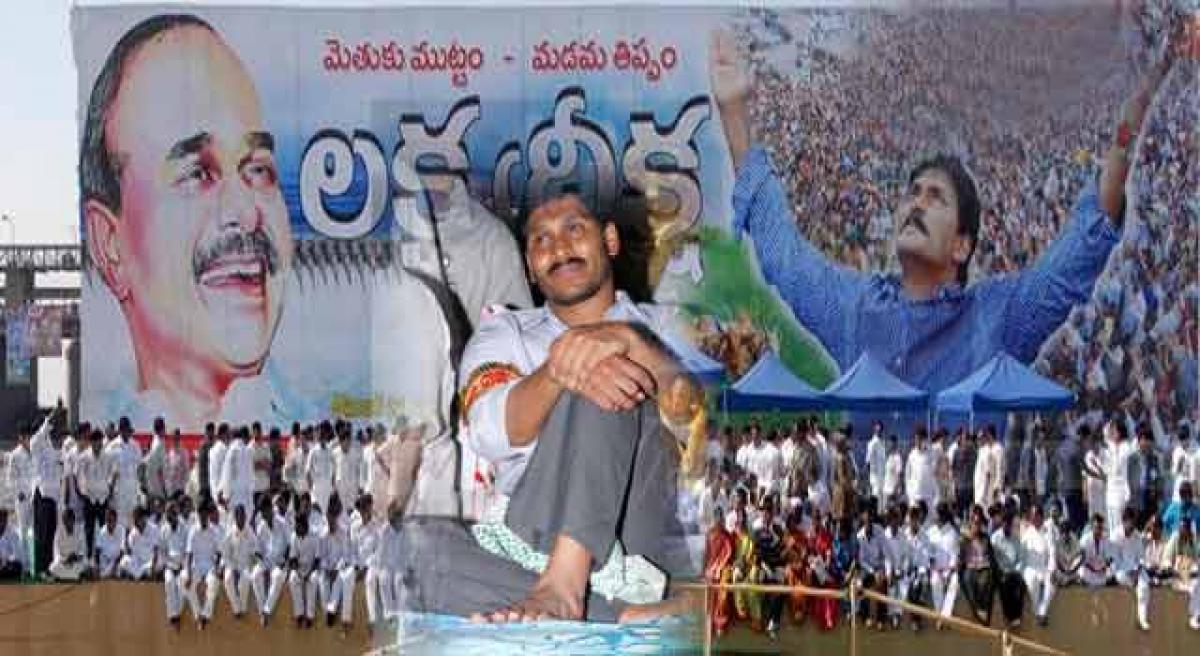 Jagan reiterated these words during his first day of Jala Deeksha here on Monday. Addressing the mass gathering Jagan said KCR is acting like Hitler. He is supporting the illegal construction of projects on Krishna and Godavari.

If the Telangana government continues with its illegal construction on Krishna and Godavari, Rayalaseema region would be parched. Condemning the attitude of KCR and the AP Chief Minister Nara Chandrababu Nadu who is speechless over the illegal constructions, a three day Jala Deeksha was launched, Jagan said.

A year and half has passed since the Telangana government has taken up the illegal construction of projects, knowing well that Rayalaseema will not get water if the projects are completed.

We will be nowhere if Rayalaseema is left waterless by the construction of projects on Krishna and Godavari rivers. Naidu has to be responsive to oppose the illegal constructions, he said.

Jagan said many states have constructed projects with a live storage of 1750 TMC ft water in addition to that, they are storing another 2-300 unauthorised TMC ft of water.

Karnataka and Maharashtra governments have taken up construction and have stored around 1300 TMC ft of water. Rayalaseema region will get water only after sufficient storage of water in Almati and Naryanapur dams by the Karnataka that too after Maharashtra gets its share.

And now the Telangana is misutilising the water in-between at Mahabubnagar before reaching Srisailam. Around 2 TMC ft of water was planned to be diverted through Palamuru-Ranga Reddy lift irrigation and by the Dindi projects.

The Kalwakurthy project was also modified to store 40 TMC ft bypassing the actual limit of 25 TMC ft and in addition to this 0.66 TMC ft water was also being diverted illegally, he alleged. He asked KCR how these actions are justified. There is no chance that Rayalaseema will get water if the level in the Srisailam project is not maintained at 854 ft.

The Telangana government keeping the 854 ft aside, has set a intake point to 800 ft and utilising water not letting the project reach the level to 854 ft. The Srisailam project was designed to store a capacity of 854 ft in 1960 and in accordance to that late chief minister Anjaiah has laid a foundation stone and took up the construction of Pothireddy Padu head regulator, he recalled.

Naidu during his earlier tenure as chief minister brought a fresh GO No 107, reviving to maintain the water level at 854 ft. It is also said that water could be drawn if acute necessity arises in case of drinking water problem, he said.

Water storage level at 854 ft is a must if Rayalaseema has to get water, Jagan Mohan Reddy said. Inspite of all these changes, KCR has set the intake point at 800 ft. Knowing all these facts why is AP Chief Minister staying calm, he said.

Naidu has to question KCR on this aspect and also on how Srisailam will get water, what about Nagarjuna Sagar and what about Krishna delta which will turn into a desert. Jagan warned both the CMs not to play a political game and ruin the lives of five crore people.