Kaleshwaram project to get additional power from July: CM 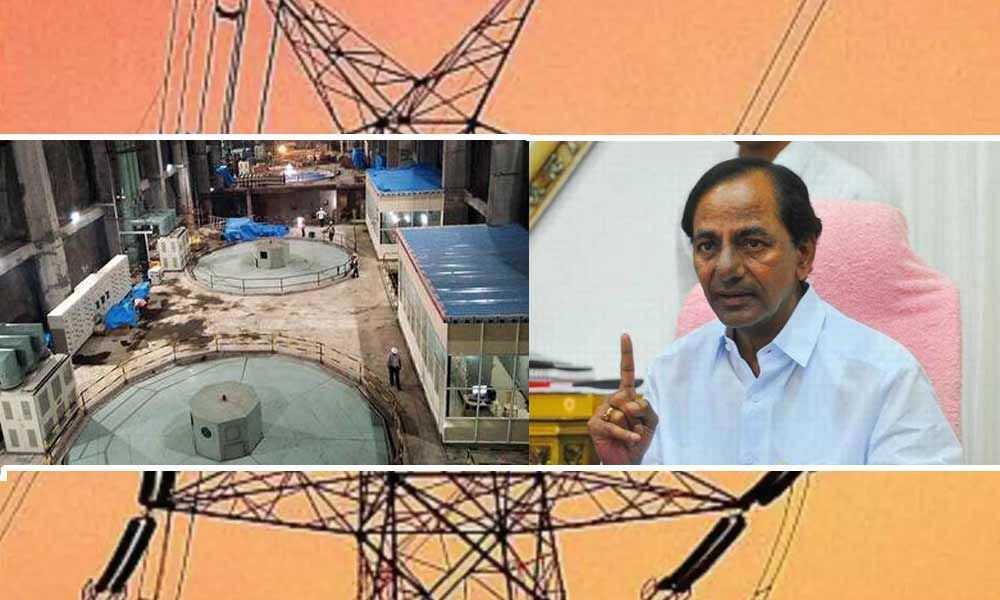 Chief Minister K. Chandrashekhar Rao instructed the officers concerned to get prepared and be ready for supplying the required additional power for lifting water from Kaleshwaram Lift Irrigation Project from July this year.

Hyderabad: Chief Minister K. Chandrashekhar Rao instructed the officers concerned to get prepared and be ready for supplying the required additional power for lifting water from Kaleshwaram Lift Irrigation Project from July this year.

The Chief Minister said that at the rate of 2 TMC per day during this year the required additional power for lifting the water would be 3, 800 MWs. Whereas after adding one more TMC and at the rate of 3 TMC water per day from next year Kharif season for lifting the required additional power would be 6,110 MWs. He said that by mobilizing the required additional power supply should be ensured round the clock 24 hours for six months in a year when there would be full flow of water in Godavari River. He explained that by lifting water from 540 to 600 TMC in a year the government aims at providing water for 45 lakhs of acres for both the crops. He assured that the power utilized for lift irrigation schemes would be funded by the government and accordingly for the power organizations the government gives it as a special grant. He suggested to explore the possibilities of producing hydel power through lift irrigation schemes.

"The construction activity required to lift 2 TMC of water from Godavari through Kaleshwaram Lift Irrigation Project is almost nearing completion. The wet trial run of the pumps was successful. From July end this year the water will have to be lifted. This requires 3,800 MWs of additional power. There is every necessity to make complete use of Telangana share of Godavari water. Water availability is only at Medigadda. Hence government has decided to lift an additional one TMC of water from there only. Thus, from next year at Medigadda 3 TMC of water would be lifted. This requires including the 3,800 MWs a total of 6,100 MWs in a year. It is possible to lift water from June to December when water in Godavari river is available. During June and November months at the rate of 2 TMC per day and during July to October at the rate of 3 TMC per day water could be lifted. Even during December, the lift could be operated and some water could be drawn. Hence a scientific estimation is required to be arrived at as to what would be the quantum of water in a particular month and also the power requirement for drawing the water. Efforts and arrangements are to be made right from now to supply adequate power for lifting the water as detailed above," said the Chief Minister.

"Water for irrigation, drinking and for industries for 85% of the area in Telangana has to be drawn from river Godavari only. Telangana has a share of 954 TMC of water in river Godavari. For utilizing this water Telangana has all the required permissions and clearances. We had an agreement with Maharashtra state for construction of projects. As per statistical data of CWC for 44 years there is abundant water at Medigadda. Hence as and when there is a full flow of water into river Godavari maximum possible quantum of water needs to be lifted through Kaleshwaram project. Water to be lifted and supplied through Medigadda, Annaram and Sundilla to Yellampally and from there to Midmanair. Through reverse pumping from Midmanair one TMC of water needs to be lifted to Sriramsagar project and another TMC to Mallanna sagar. Next year 3 TMCs to Yellampally and 2 TMCs to Kondapochamma saga to be diverted and thus the reservoirs and tanks are to be filled. In addition to 22 Lakh acres ayacut proposed under Kaleshwaram project water to be provided to Sriramsagar ayacut, Guthpa- Ali sagar schemes, Nirmal-Mudhole constituencies and to Husnabad constituency through Gowravalli. All together through Kaleshwaram project water for two crops has to be provided to 45 Lakhs of acres. Thus, in a year there shall be crop in 90 lakhs of acres. In addition to water for irrigation for drinking water and for industries also Kaleshwaram water shall be supplied" said the CM.

"The views expressed by some people on Kaleshwaram project construction expenditure and maintenance are baseless and meaningless. Each area will have its own priorities and preferences based on the prevailing circumstances. For example, water is not available in gulf countries and hence the government there spends more money on drinking water. For Las Vegas which was a desert once the American government by spending huge amount supplies water from a distance of 600 Kms. In Telangana the top most priority is providing water for irrigation for agriculture. The government spends for the livelihood of farmers and for agriculture. Once the Kaleshwaram project is ready it would be golden threshold to Telangana. In a year there would be crop in 90 lakhs of acres. Within one or three years the resultant crop would yield the capital which is equal to the expenditure incurred on the construction of the project. The life style of the farmer would be changed and the whole atmosphere in Telangana is also changed," said the CM.

The Chief Minister said that an another 1000 MWs would be required for Devadula and Sitarama irrigation projects' maintenance. CM said that the substations constructed for irrigation projects are to be maintained by the power organizations. He said that there is a possibility of producing Hydel power through lift irrigation and hence scientific survey has to be made with regards to hydel power production and the places where it can be produced.

TRANSCO and GENCO CMD D Prabhakar Rao, who participated in the meeting, explained to the CM that in addition to round the clock power supply to all the sectors as well as power supply for Kaleshwaram project, the required power needed for other irrigation projects will also be supplied. As part of the review the CM enquired about the power scenario in the state. The CMD told the CM that despite 11,000 MWs of maximum power demand supply was provided without any power cuts. He said that the department is prepared to supply 6,000 MWs for the lift irrigation projects and is totally geared up to meet the demand even it touches 17,000 MWs. He said that the department is ready with plan of action. He said that the present installed capacity is 16,203 MWs and by the end of this year the production will commence for 1080 MWs at Bhadradri Plant and through NTPC another 1600 MWs will be available in couple of months. The works at 4,000 MWs Yadadri Ultra Mega Power Plants are on fast track. The CMD said that the TRANSCO is totally prepared and is capable of supplying 28,000 MWs power on completion of production.