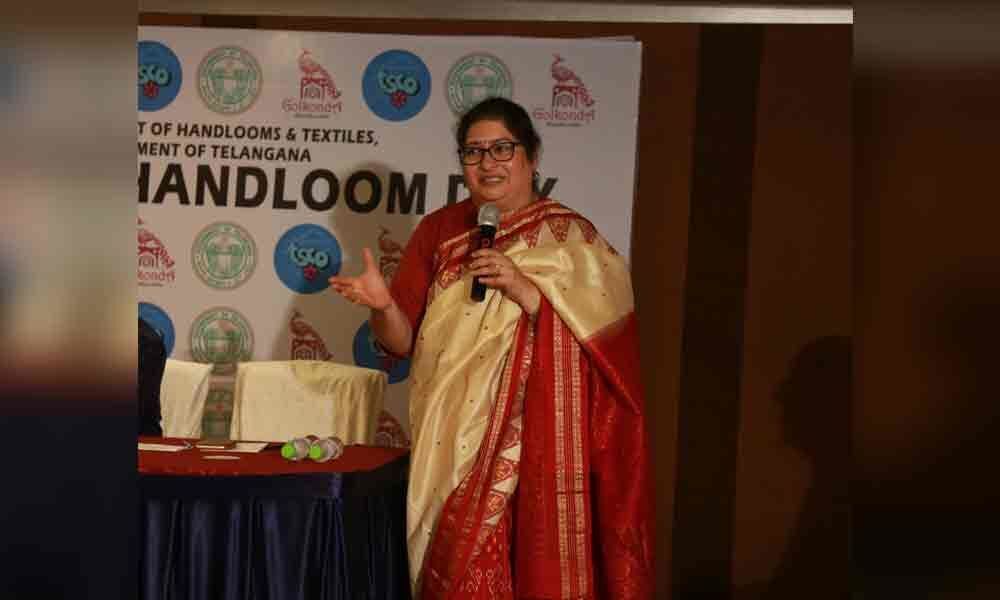 Warp and weft interspersed with vibrant colours resulting in exquisite well-crafted designs makehandloom yardages unique canvases that are a seamless...

The second largest income generating activity after agriculture in India, handlooms bind together threads of diversity making us aware of the distinct contribution of each region. Look at a handloom cloth and you can identify the place of its origin,history, culture and folklore.

Pochampallyikkat, Gadwal cotton, Narayanpet silk and cotton, Warangal Dhurries, Karimnagar bed sheets and furnishings are part of a long and varied list of handlooms in Telangana which is the only state in the country to have geo-tagged all handloom and power looms with complete data pertaining to weavers within its geographical area.

Telangana is also one of the most pro-active states in the country taking steps to ensure that weavers become direct beneficiaries of schemes announced for their welfare and development unlike in the past where master weavers and cooperative societies cornered all the benefits.

"We have adopted a multi-pronged strategy to make handloom weaving lucrative for the weavers. The first step is to buffer their income and make weaving a sought after vocation through making available raw material and inputs, the second is to ensure welfare schemes like loan waiver and savings and the third is providing improved market access through branding and promotion," says Shailaja Ramaiyer,managing director, Handlooms and Textiles, Government of Telangana.

Optimum income levels for sustenance through the "Chenetha Mitra" scheme have benefited about 21, 915 weaversin the state in the form of input subsidy linked wage compensation under the Direct Beneficiary Transfer System (DBT) where subsidy is provided to purchase raw material.

While 10 per cent subsidy is provided by the centre, out of the 40 per cent yarn subsidy of the state government only 5 per cent is given to the stakeholder/ master -weaver and the remaining 35 per cent is credited to the weaver/ancillary worker. This has been a boon helping weavers in and outside the cooperative fold purchase cotton hank yarn, domestic silk and wool, dyes and chemicals through NHDC empanelled firms.

"There has been a paradigm shift in development across the sector. Weaver distress leading to high attrition has been arrested to a great extent because of this support and the master weavers are happy too" Shailaja Ramaiyer clarifies.Training and infrastructure development, technology and skill up gradation in tandem with the National Handloom Development Programme (NHDP)of the centre, and the development of clusters and weaving parks are all part of this endeavour.

Waiver of loans and the weaver's thrift fund 'NetannakuCheyutha' launched two years agowere driven purely by welfare of weavers says theManaging Director who feels the sector is important for women's empowerment as well. 83 per cent of the weavers are women according to statistics from all over the country.

Under the savings scheme, weavers deposit 8 per cent wages matched by 16 per cent by the government, in a Recurring deposit with a lock in period of three years. This can be withdrawn after three years directly by the weaver to meet personal expenses related to health, weddings and other family commitments.

The most dynamic action in the handloom sector however relates to marketing and brand promotion and the state government has made handloom a style statement by tying up with well known and budding designers, celebrities and models to wear handlooms from the state."We are now bringing focus on yardage to tap the men's market and make handloompreferred for blazers, waistcoats, kurtas, and scarves.

Reviving the TeliyaRumal technique, promoting Gollabhama, Pitambari, Armoor and Tussar silk from Mahadevpurand tying up with Myntra,Reliance and Tatas for bulk orders have become priorities as world markets are looking at textiles from Telangana with renewed interest," ShailajaRamaiyer states talking about focus areas.