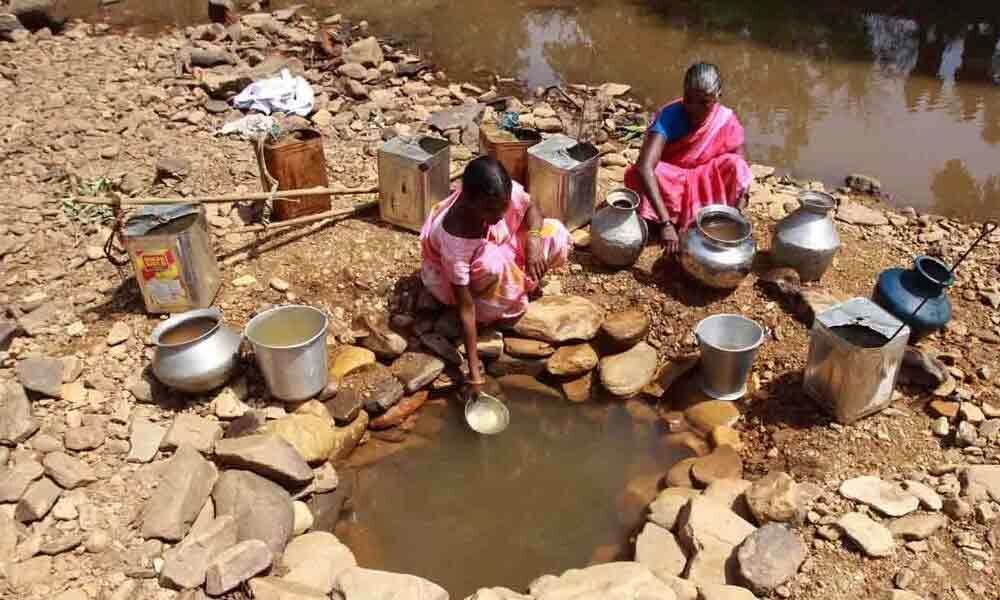 In India, according to the Asian Water Development Outlook, 2016, almost 89 percent of groundwater extracted is used for irrigation.

There is a major concern whether the present practice of groundwater use can be sustained as the depth of ground water level continues to drop. The cropping pattern in India is highly skewed towards crops that are water intensive.

The water conservation story is not just about the farmers, but more about the food habits of India.

In addition, the governments never really cared or bothered to lay emphasis on water management to the extend needed nor did they try to educate our populace about the need to change the food habits.

In addition, due the pressure from various lobbies and by also treating farmers as a vote bank, they had gone ahead with incentive structures like MSP, heavily subsidized electricity, water and fertilizer, all of which have played a significant role in misalignment of crop pattern.

Around 89 percent of groundwater extracted is used for irrigation and crops such as paddy and sugarcane consume more than 60 percent of irrigation water.

The costs of fertilizers are key determinants of profitability of farming. The fertilizer consumption which was continually increasing since 2002 has shown a declining trend after 2011.

Organic and natural farming techniques including Zero Budget Natural Farming (ZBNF) can improve both water use efficiency and soil fertility.

The main aim of ZBNF is to eliminate chemical pesticides and promote good agronomic practices that are eco-friendly and less water consuming.

Over the years, several new challenges have emerged before the sector. With fragmentation of agricultural land holdings and depletion of water resources, the adoption of a resource efficient ICT based climate smart agriculture can enhance its productivity and sustainability.

With decline in size of landholdings in agriculture, India has to focus on resource efficiency especially in smallholder farming to attain sustainability.

The Economic Survey proposes that a combination of resource efficient method, dynamic cropping patterns, climate change responsive farming and intensive use of ICT should form the backbone of farming in India.

For a safe and food-secured future, the agriculture sector has to undergo tremendous transformation from the philosophy of 'green revolution' led productivity to 'green method' led sustainability.

Statistics do not really tell us anything about the real picture. Those are good for the governments to dangle before the public and to counter the Opposition onslaught.

What should really be worrying to the government if it is really sincere and really committed save India from the looming water crisis, is the process which transpires its intent into action on the ground. Is it geared up to bringing resource efficiency in smallholder agriculture, as it says?

The main policy changes it seeks to suggest is including increasing Irrigation Water Productivity (IWP) by adopting improved methods of irrigation and irrigation technologies, increasing sustainability through organic and natural farming, economising the use of fertilizers and pesticides, improving infrastructure and access to markets and adopting appropriate technology for smallholder farm.

The access to timely credit or finance is a critical determinant of profitability of agriculture. Lack of access to credit facilities has severe impact on agricultural productivity.

The regional distribution of agriculture credit in India is highly skewed. When compared to western and southern States, the hilly, north-eastern and eastern States are at a disadvantage.

The Economic Survey suggests that the provision of agriculture credit should take care of the needs of small and marginal farmers who constitute a majority in these regions.

Talking about the allied sector which includes animal husbandry, dairying and fisheries the Economic Survey emphasises that to transform the rural economy, greater emphasis should be given to the allied sector with the major focus on dairy, poultry, fisheries and rearing of small ruminants.

Food security exists, as per the FAO, when all people at all times have physical and economic access to sufficient, safe and nutritious food that meets the dietary needs and food preferences to ensure an active and healthy lifestyle.

India's food security challenges lie in the areas of low GDP per capita, sufficiency of supply, public expenditure on R&D and protein quality.