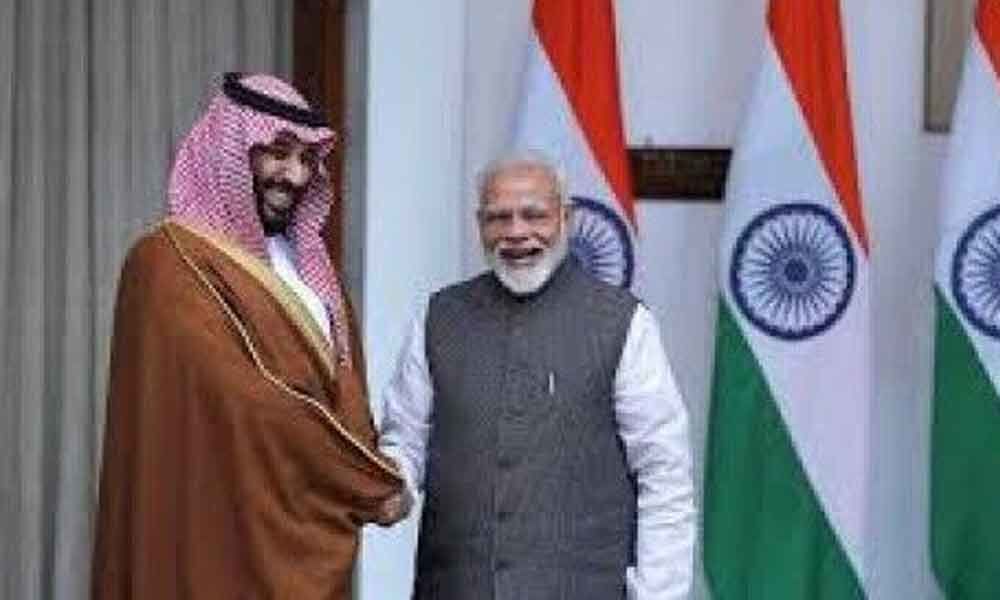 A record 200,000 pilgrims from India are going to perform Haj this year, after the third consecutive increase in India's Haj quota.

A record 200,000 pilgrims from India are going to perform Haj this year, after the third consecutive increase in India's Haj quota.

The decision was announced when Saudi Crown Prince Mohamed bin Salman, popularly referred to as MBS, visited India in February 2019. His state visit was nothing short of historic as it signalled a growing strategic convergence between Riyadh and Delhi.

The move to increase India's Haj quota comes at a time when Saudi Arabia is treading the path towards realizing the Crown Prince's ambitious Vision 2030 that looks at diversifying the country's economy and reducing its decades old reliance on oil.

Haj is an important part of this strategy, with the potential to transform the Kingdom's infrastructure and religious tourism economy.

Haj has transformed over the years from Islam's holiest religious pilgrimage to a cornerstone of Saudi Arabia's progress.

The religious tourism sector in the country, which includes Haj and Umrah, is currently valued at over $5 billion.

The Kingdom's infrastructural modernization is epitomized by projects like the Haramain High-Speed Rail Project, a 450-km, two-way electric train linking the holy cities of Makkah and Madinah, with extensions to Jeddah and King Abdullah Economic City.

The project will carry 60 million passengers a year with a seating capacity of 417 per train and travelling at a speed of 300 km per hour.

Dar Al-Hijrah is another $14.7 billion upcoming project in Madinah that will have 20 administrative and 80 residential towers, 76 four-star hotels and six five-star hotels offering 40,000 rooms to pilgrims, and a 400-bedded hospital.

Companies from all over the world, including Indian unicorns and construction magnates, are tapping into the vast market that this nation building entails.

Saudi Arabia's Ministry of Haj and Umrah has partnered with India's leading hospitality start-up Oyo Hotels for implementing and auditing the aspirational standards for affordable and quality accommodation in existing buildings in the holy city of Makkah, through the use of technology and proprietary applications.

Given the substantial movement of people between the two countries, India has also allowed Saudi Arabia a 40 per cent increase in the airline seat quota under the revised bilateral flying rights.

Indian airlines like Indigo and GoAir are exploring the market to make the best of the new opportunities.

Saudi Arabia also seems to have taken a cue from India's Digital India initiative, as innovation is leading the enhancement of Haj services in the country.

The Saudi government is incorporating e-services, aiming for full automation in the future to enrich the religious and cultural experiences of the pilgrims.

Saudi Arabia is also collaborating with the private sector to develop innovative digital solutions for pilgrims by tapping into mobile applications and the Internet of Things to promote digitally administered services for the pilgrims.

A total of 25,000 Haj pilgrims in Mina will be issued wearable high-tech smart cards that will store the pilgrims' personal information and health status and will have location trackers.

Haj will continue to be the harbinger of cultural and economic cooperation between India and Saudi Arabia.

The two counties are in talks to implement the Makkah Road Initiative for Indian pilgrims. The initiative is an integral part of the Kingdom's National Transformation Program 2020 to make the Haj pilgrimage more comfortable and hassle free.

The service entails issuing visas, ensuring compliance with health requirements and codifying and sorting luggage at airports in the pilgrims' own countries.

Haj demonstrates that cultural diplomacy can play a vital role in furthering economic modernization and boosting strategic cooperation between nations.