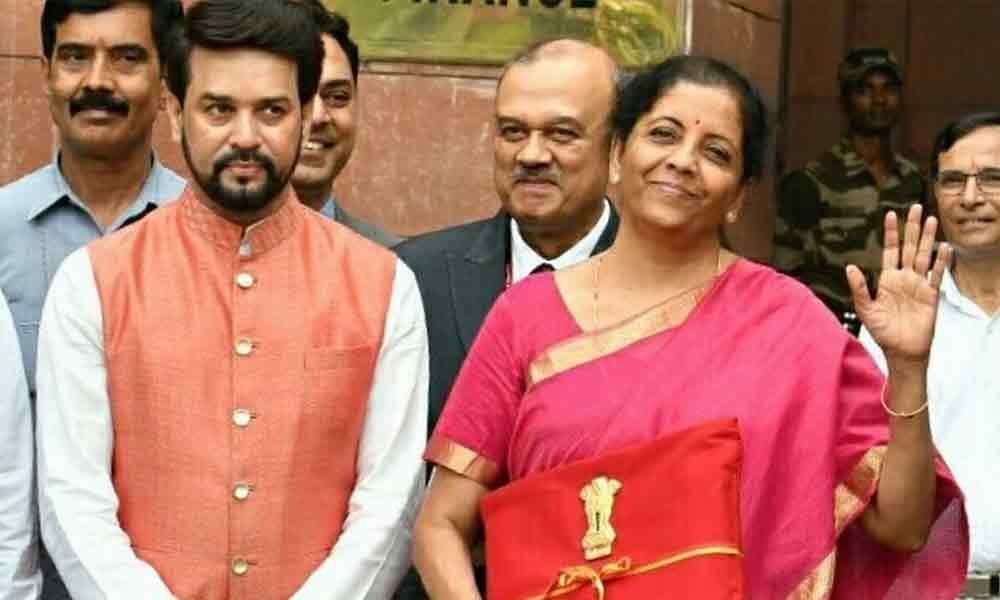 Union Finance Minister Nirmala Sitharaman presenting her budget in the Lok Sabha made couple of references to Public Private Partnership.

Union Finance Minister Nirmala Sitharaman presenting her budget in the Lok Sabha made couple of references to Public Private Partnership.

Citing the example of the phenomenal task in cities like Mumbai and smaller cities of Indian Railways, Nirmala Sitharaman said that the Railways will be encouraged to invest more in suburban railways through Special Purpose Vehicle (SPV) structures like Rapid Regional Transport System (RRTS) proposed on the Delhi-Meerut route.

In yet another reference the Finance Minister said that under the Pradhan Mantri Gramin Digital Saksharta Abhiyan, over two crore rural Indians have so far been made digitally literate.

She proposed that internet connectivity in local bodies in every Panchayat in the country will be speeded up with assistance from Universal Service Obligation Fund under a Public Private Partnership arrangement. This will bridge rural-urban digital divide said the Minister.

Estimating that Railway Infrastructure would need an investment of Rs 50 lakh crores between 2018-2030 and given that the capital expenditure outlays of Railways are around Rs 1.5 to Rs 1.6 lakh crores per annum and completing even all sanctioned projects would take decades PPP was suggested.

Why is this importance to Public Private Partnership in taking up government projects? Is this a new phenomenon or has been in existence quite for some time?

During the period immediately after independence, in order to overcome the red-tape and indifference in the functioning of Government Departments and to serve the citizen better, several Public Sector Undertakings (PSU) were established all over the country. As they were incurring losses public sector reforms were introduced leading to closure of PSU s in large numbers.

Later about three decades and half ago, when the Indian economy was opening up, several joint ventures were formed in just one year between Indian and foreign companies.

Majority of them ended up in breaking within five years later as they failed to produce the expected results. The objective of partnerships, through joint ventures, of making one plus one produce three, could at best be realized in producing just less than two-the reason being 'cultural' problems.

The development of a comprehensive shared vision, going beyond the financial value of the Joint Venture to surface and match the cultural values of partners was absent then. Thus, the experience in India revealed that joint ventures are notoriously difficult to manage with some notable exceptions.

Against this experience, in India, as in other countries evolved the concept of "Public Private Partnership" and steadily gaining strength. It is assumed that Government's collaboration with non-profit private sector in the form of PPP would improve equity, efficiency, accountability, quality and accessibility of the system. Advocates argue that the PPP can potentially gain from one another in the form of resources, technology, knowledge and skills, management practices, cost efficiency and so on.

Public-Private-Partnership (PPP) is an evolving concept as well as practice in many developing countries, in which an otherwise government (Public) service is funded by state either totally or partly, and operated through a partnership between government and one or more non-governmental organizations or private sector companies.

The (Private) non-governmental organizations as well as some Corporate as part of social responsibility have been providing citizen services in a majority of democratic and developing countries including India.

The commitment and efficiency with which these services are being provided by some of them forced the government to prefer for an increased involvement of them in the provision of services traditionally provided by, and seen as a function of the state.

This entails a paradigm shift in the role of the government from provision of services to partnering with a private non-governmental organization in making available these services, through a meaningful arrangement.

Such arrangements are referred as Public Private Partnerships (PPP). However, the responsibility for providing the service still rests with the government.

The NGO or a similar organization initially may invest in developing infrastructure, leadership and technology and provide related services in partnership with the government by way of making proper use of the state machinery which often do not add any additional financial burden to the state.

The government subsequently adds strength to the PPP by providing both Capital and Operational Expenditure within its budgetary limits for a particular service while retaining responsibility for the delivery of core services.

Arrangements between the government and the private organization are governed by long-term and short term understanding in the form of "Memorandum of Understanding" or "PPP Agreement".

It specifies the obligations of both the parties to deliver within the broad framework of performance indicators and standards.

Memorandum of understanding is an essential tool to empower Public Private Partnership. The essential role of the Government (Public) in all PPPs is to define the scope of activity of service, specify priorities, targets and outputs and allow operational freedom to deliver the services to its private partner.

PPP takes many forms such as design, construct and maintain or build, own, operate and transfer. The choice of form depends on factors such as the government's objectives, the nature of the project, the availability of finance, and the expertise that the private sector can bring.

It also equally depends on the values, objectives and goals of the partnering private sector. PPP is increasingly being used in social service activities such as providing Emergency Response Services as in the case of 108 ambulance services almost all over India beginning with the then united Andhra Pradesh. to everyone in general and to vulnerable sections in particular.

It is a prerequisite to make the partnership a publicly driven process in order to improve its legitimacy in the eyes of the common citizen. It is also important that there is clear articulation of responsibility, an open process and meticulous detailing to avoid suspicions and apprehensions in the minds of all.

Therefore, the power relations in the partnership also needed to be understood.

PPP however would not mean privatization of the sector. Partnership is not meant to be a substitution for lesser provisioning of government resources nor an abdication of Government responsibility but as a tool for augmenting the services.

The success of this PPP will however depend on the preparedness and commitment of respective state governments as well as private partner in adhering to the provisions of MoU in letter and spirit failing which it is the poor citizen who is the sufferer.

Then only it can be called as Empowerment of PPP through MoU.

(The author is CPRO to Telangana Chief Minister)