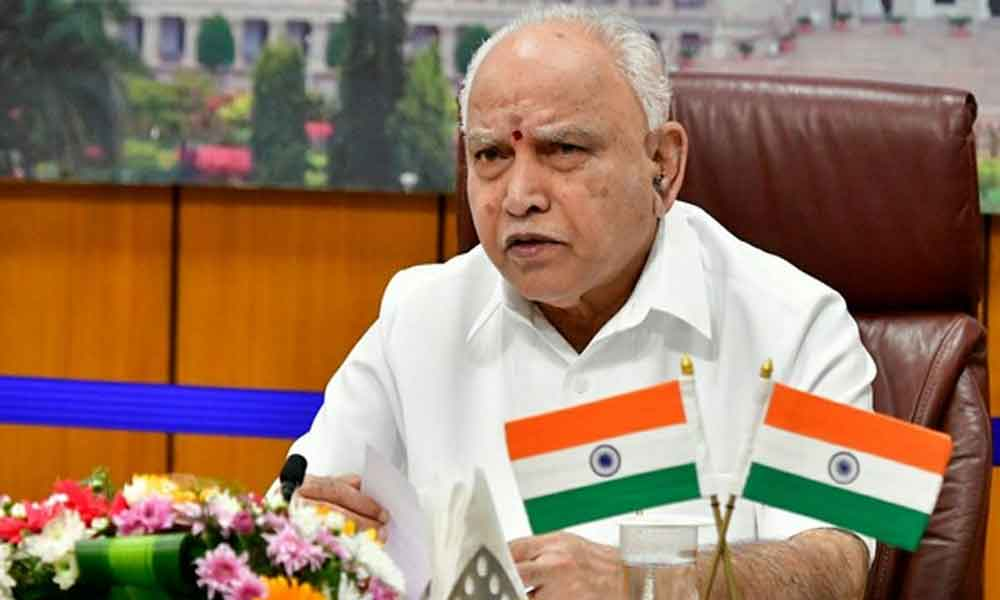 Bengaluru: Karnataka Chief Minister BS Yediyurappa on Wednesday hit out at opposition leaders, especially former CMs Siddaramaiah and HD Kumaraswamy, for casting aspersions on fund mobilisation for the Ram temple in Ayodhya. Both the leaders had alleged there was lack of transparency in the fund collection drive.

Kumarswamy had on Monday accused the RSS of marking houses of those who gave donations for the temple and those who did not and alleged it was similar to what the Nazis did in Germany.

The statement drew widespread reaction from various quarters including the Pejawar Math seer Swami Vishwa Prasanna Teertha, who demanded proof from Kumaraswamy to substantiate his claim.

Addressing a public meeting at Shivamogga on Wednesday, the chief minister said no one is compelled to donate for Ram temple. "We are not forcing anyone to donate. When Hindu, Muslim and Christians are assisting one mother (India), some people are making nasty comments, which doesn't suit their stature," Yediyurappa said. "With deep anguish I say that at least from now on exercise caution while speaking in public and refrain from making baseless comments," Yediyurappa said. The chief minister's reaction came hours after Kumaraswamy said on Wednesday that he was not opposed to the construction of the shrine, but only wanted more transparency in the fund mobilisation. The government has a responsibility to check who was collecting funds for the temple, he told a press conference here. "I am neither opposed to the Ram temple nor did I speak ill of any organisation or the collection of funds for Ram temple. Even my party members have given money, but I want to know who has authorised those collecting money door-to- door? What's their background? Who gave them licences," he said. He maintained that his objection was only to collection of funds for the temple construction without transparency and "loot and misuse" of funds in the name of Lord Ram. The RSS dismissed the former CM's earlier allegations, saying they do not qualify for any response while the State unit of the Vishwa Hindu Parishad, which is among the organisations collecting funds for the temple, condemned it. The JD(S) leader said the donations could be done through online transactions. "We have opened so many Jan Dhan accounts, then why cannot we collect money online? Why collect on the street and mark the houses?" the JD(S) leader asked. He further alleged no one gave any account of the money collected in 1990 for the Ram temple from across the country. Kumaraswamy said he came from a family which has faith in God, but never misused the name of God. "We have commitment to the 130 crore people but we don't believe in breaking the society," the former chief minister said. VHP organising secretary in Karnataka Basavaraj on Tuesday condemned Kumaraswamy's earlier statement against the RSS.

Volunteers of various organisations, including the VHP, were reaching out to all sections of society.

The latter were responding positively and contributing towards the construction of the grand temple at Ayodhya, he added.

They did not even demand money from people and the outreach was merely to enable the whole country take part in the effort as "everyone believes strongly that Lord Ram is the identity of Bharat," he added.

"VHP takes serious note of baseless allegations made by an individual who held the highest office of the State. The VHP also condemns Kumaraswamy's statement for making unwarranted remarks on the patriotic organisation RSS," Basavaraj said.

The fund collection drive for the Ram temple started from January 14 on the occasion of Makar Sankranti and will go on till February 27.