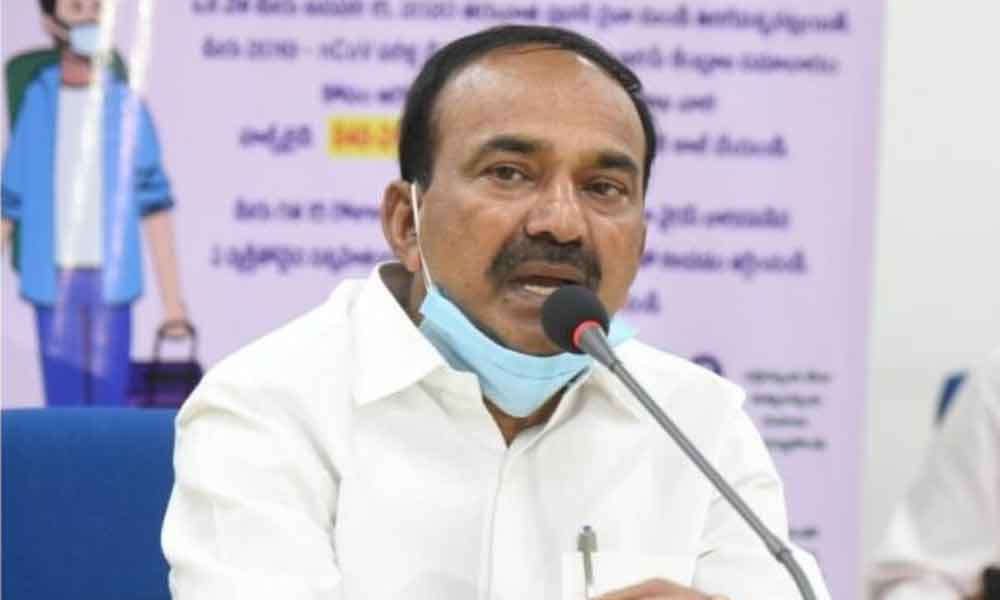 Health Minister Eatala Rajender on Friday instructed the department officials to conduct 50,000 Covid-19 tests a day in the wake of cases increasing rapidly in neighbouring Maharashtra and Karnataka.

Hyderabad: Health Minister Eatala Rajender on Friday instructed the department officials to conduct 50,000 Covid-19 tests a day in the wake of cases increasing rapidly in neighbouring Maharashtra and Karnataka. In a video conference, the minister ordered all the district medical and health officers from adjoining districts of two neighbouring states to strictly implement the tracing testing and treatment procedure.

Eatala issued special orders to the DMHOs of the districts which share borders with Maharashtra and Karnataka to be alert and accelerate monitoring on the State borders to make sure that nobody enters the districts without screening and take up precautionary measures. Adilabad, Asifabad, Jayshankar Bhupalpally, Kamareddy, Mancherial, Nirmal and Jagtial districts share border with the States where Corona virus cases increased abruptly. Lockdown has been announced in Nagpur city of Maharashtra from March 15 to 21. To avoid lockdown in Telangana, the minister called immediate video conferencing with top health officials and DMHO's and instructed them to take necessary measures. Covid-19 positive cases in Telangana also rose slightly. Nearly 200 cases daily were being recorded for the last two days. Number of cases in GHMC limits also increased to 44 on March 11, whereas there were only 31 cases on March 8 in the GHMC area. About 40,000 tests in the State are being done by the government daily. As many as 160-190 positive cases were being registered among those tested. The numbers are increasing in the State and in GHMC as well for the last three days. As many as 91,14,985 samples were tested by March 11 according to the government.