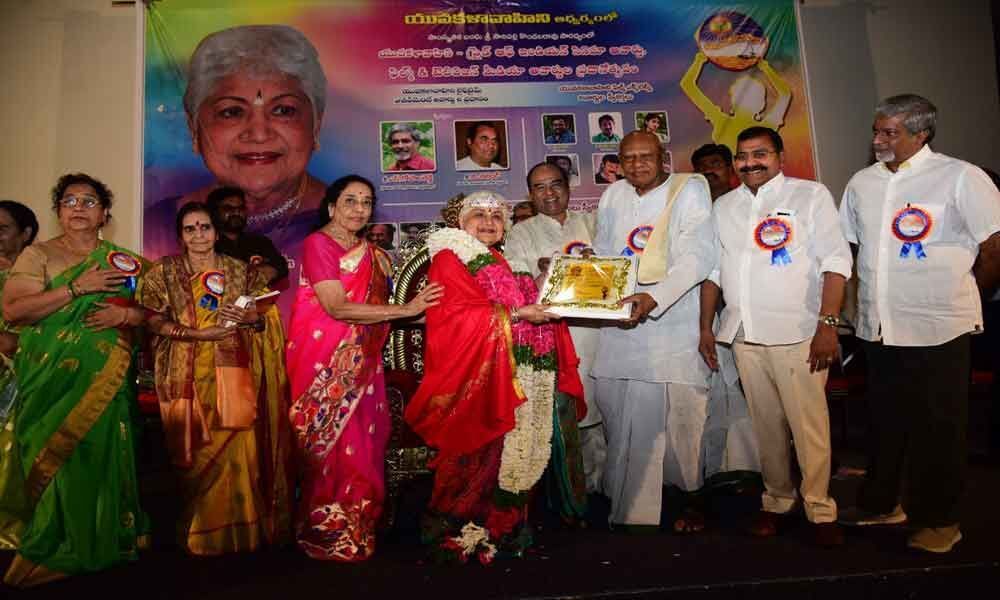 Former Chief Minister of Andhra Pradesh and ex-Governor of Tamil Nadu K Rosaiah heaped praises on artistes and media personnel for defying all odds and never-give-up spirit against the stream.

Banjara Hills: Former Chief Minister of Andhra Pradesh and ex-Governor of Tamil Nadu K Rosaiah heaped praises on artistes and media personnel for defying all odds and never-give-up spirit against the stream. He was the chief guest at the award distribution ceremony organised by Yuvakalavahini, a four-and-a-half-decades cultural organisation here at Prasad Labs on Monday.

He presented the 'Pride of Indian Cinema' award to the veteran actress Sowcar Janaki, along with lifetime achievement awards to cine producer S Gopal Reddy and singer G Anand. Veteran actress Jamuna said Sowcar Janaki has been her role model throughout her career. She was surprised to see Janaki in her 80's was still active in her career.

Along with the major awards, Yuvakalavahini presented awards for TV and media personnel for their contribution. Dr Mohd Rafi, convenor of the award committee, explained the reasons behind selecting the people from various backgrounds. "TV serials now-a-days are competing with high budget films and the actors have become familiar in every household," he said the importance of the media. "Though there is a hardcore criticism against media, there are still journalists who are rooted to their moors and still abide by their commitment. We want to felicitate them for their noble endevours," Rafi said.