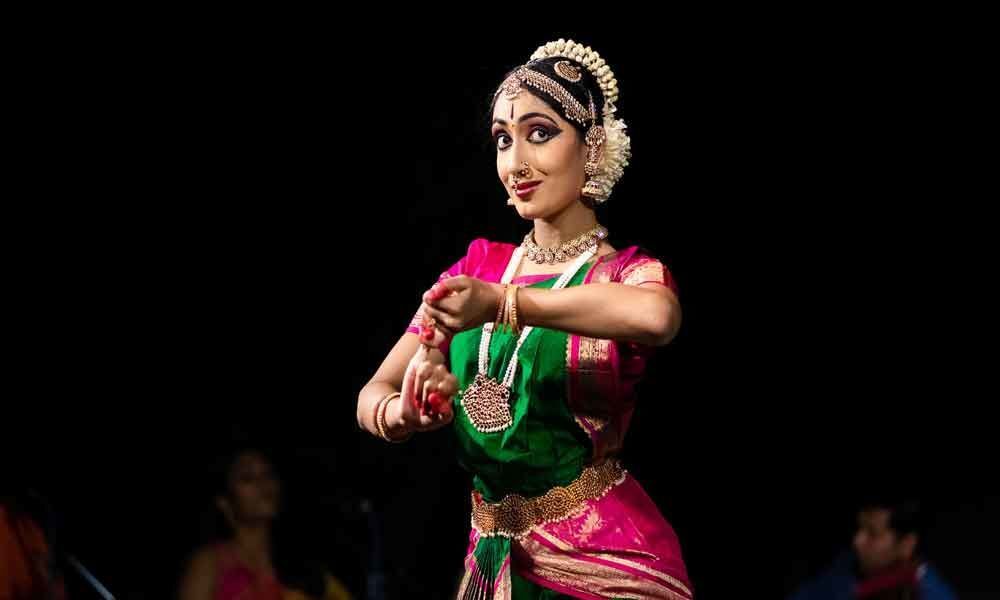 The performance by Gayatri Amulya, disciple of Kiranmayee Madupu, was excellent and well appreciated. The first item was a sprightly Alarippu, literally meaning to blossom like a flower.

Paramapara – A showcase of vintage Bharatanatyam repertoire was presented by Hema Arangam – The Golden Platform at the serene venue of the Apollo Foundation Theatre on Friday.

The performance by Gayatri Amulya, disciple of Kiranmayee Madupu, was excellent and well appreciated. The first item was a sprightly Alarippu, literally meaning to blossom like a flower. In this traditional nrdhoka itta or pure dance piece the dancer seeks the blessings of God, the Guru and the audience. This was set in a rhythm cycle of seven beats also known as Misra chapu talam.

This was followed by Varnam: "Swami Nadanai Azhaituva" in Kamboji Ragam. A Varnam was the pièce de résistance of any Bharatanatyam performance which showcases the capabilities of the dancer in both physical movement (Nritta) and expressional content (Abhinaya). Varnams are known to have a unique flavour of shringara and bhakti.

They describe the pursuit of the 'Nayika' for the 'Nayaka', representing the yearning of the Jeevatma to be one with the Paramatma itself. This piece centres around a lovelorn maiden or the Virahotkantita Nayika, who entreats her friend, the Sakhi to fetch her lord Subramanya Swamy. "How can someone who is cognizant of my love, be willing to ignore my pain even for a second.

The pangs of separation are beyond my threshold. His heart must be made of stone, for it will not soften even on seeing my plight", she urges, as she yearns to be one with Him. This lengthy composition was a test of the dancer's skill and stamina which she effortlessly vindicated. The jathis for this have been composed and choreographed by Kiranmayee Madupu taking the Vazhuvoor style of crisp, simple and elegant jathis as inspiration.

Chiselled elegance was the highlight of "Natanam Adinar" in Vasantha ragam. This piece describes the mythological story about Vyaghrapaada and Patanjali who awaited the day when Shiva will arrive to perform his cosmic dance, the Ananda Tandava, in Thillai-Chidambaram. Eventually their patience was rewarded when, on the appointed day, in the Tamil month of Tai, in midday, Shiva arrived in full glory and performed his dance in the Chit Sabha.

Natanam Aadinaar is a composition of Gopala Krishna Bharati. "Madhura Nagarilo" in Ananda Bhairavi Ragam describes a young maiden on her way to Mathura obstructed by a mischievous and flirtatious Krishna. "I have to go and sell buttermilk, leave my path Krishna!", she urges. "I will come and see you at nightfall, stop tugging on my sari Krishna!". She cautions him to stop playing pranks, for it is the king's road. "My fellow maidens are to join me, please leave my hand now!", she appeals to him.

This Javali composed by Chittoor Subramanyam Pillai, captures the beautiful flutters of young love! Gayatri used her mobile face as a canvas to capture the subtle expressions of Abhinaya required. The brisk Thillana ending the performance was in Khamas Ragam. The dance of pure Nritta: the Thillana combined deft footwork with lyrical grace and sculpturesque poses.

Gayatri looked statuesque in her well-chosen beautifully complementing costume of green and pink. The superb orchestra ensemble featured Nattuvangam by Raghunandan Chakravarthy and Kiranmayee Madupu, vocal by K Chandra Rao, Mridangam by Srinivas Karra and violin by Sai Kumar Kolanka. The evening concluded with a valedictory address of appreciation by CV Hariharan.