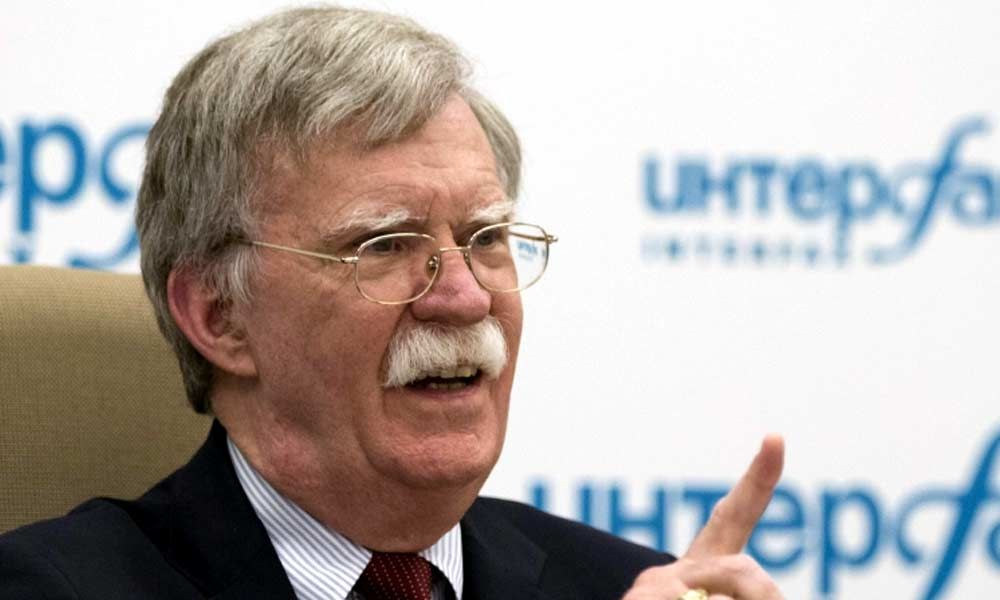 Bolton's manuscript leak has rattled the Senate trial, where lawmakers will vote this week on whether to accept witnesses.

The defence also injected Joe Biden and his family directly into the argument for why the president should not be ousted.

At only the third impeachment trial in US history, they stressed that Trump's requests to Ukraine to investigate his potential Democratic White House challenger were motivated by concerns about corruption.

Republicans faced fresh pressure to subpoena Bolton as a firsthand witness at Trump's Senate impeachment trial following new revelations, which could amount to damning evidence about the president's actions.

According to The New York Times, Bolton, in a draft of his forthcoming book, says Trump told him in August that he wanted to freeze military aid to Ukraine until Kiev helped with investigations of political rivals including Biden, his potential election opponent.

The allegation that Trump withheld the aid for his own political purposes was at the heart of Trump's December impeachment by the Democratic-controlled House of Representatives for abuse of power and obstruction of Congress.

Dershowitz argued emphatically that such charges were "unconstitutional grounds" for impeachment.

The 81-year-old also directly sought to neutralize the Bolton developments.

"Nothing in the Bolton revelations, even if true, would rise to the level of abuse of power or impeachable offense," Dershowitz said.

And he sought to downplay the controversy over Trump's pressure campaign against Kiev.

"Quid pro quo alone is not a basis for an abuse of power," Dershowitz added. "It's part of the way foreign policy has been operated by presidents since the beginning of time."

Bolton's manuscript leak has rattled the Senate trial, where lawmakers will vote this week on whether to accept witnesses.

Four Republicans would need to join Democrats in the Senate, where Republicans hold a 53-47 edge, to allow testimony from Bolton and others.

"It's increasingly apparent that it would be important to hear from John Bolton," Republican Senator Mitt Romney told reporters.

Senate Republican Susan Collins said the Bolton reports "strengthen the case for witnesses," while Senator Lisa Murkowski allowed that she has been "curious" about what Bolton might say.

"You can't have a trial, a meaningful trial, without witnesses and you certainly can't have one without John Bolton," Schiff said.

While just 51 senators are required to allow trial witnesses, 67 senators -- a two-thirds majority -- are needed to remove Trump from office.

Trump attacked his ex-advisor on Twitter, saying "I NEVER told John Bolton that the aid to Ukraine was tied to investigations into Democrats" including Biden and his son Hunter, who served on the board of a Ukrainian gas company.

"In fact, he never complained about this at the time of his very public termination," Trump added. "If John Bolton said this, it was only to sell a book."

The White House began its defense presentation Monday with a historical overview of past impeachments from Starr, whose investigation led to the 1998 impeachment of president Bill Clinton.

Starr lamented that the Senate was being called "all too frequently" to try impeachments. "Indeed we're living in what I think can be aptly described as the age of impeachment," he added.

Starr argued that efforts to remove Trump from office were unconstitutional because unlike in the cases of Clinton and Richard Nixon the articles of impeachment did not allege any actual crime by the president.

In the Nixon and Clinton cases, he noted, there was bipartisan consensus between Democrats and Republicans in the House to impeach the president, unlike in the case against Trump, which split along party lines.

Dershowitz joined Starr in arguing that American voters, not Congress, should decide Trump's fate in November.

Several presidents including Abraham Lincoln were accused of abuse of power, but not impeached for it, Dershowitz explained.

"Abuse of power is a political weapon, and it should be leveled against political opponents, and let the people decide," Dershowitz argued.

If the Senate does subpoena Bolton, the White House is likely to cite executive privilege to try to send the matter to the courts and prevent him from testifying.

Bolton was fired by Trump in September after 17 months in the job. He has said he is prepared to testify before the Senate.

Pam Bondi, Republican ex-attorney general of Florida, displayed bank records which she said showed Hunter Biden had been paid "millions" of dollars to serve on the Burisma board while his father was Barack Obama's vice president.

She cited a State Department official who expressed concerns in 2015 that the appointment could create the "perception of a conflict of interest."