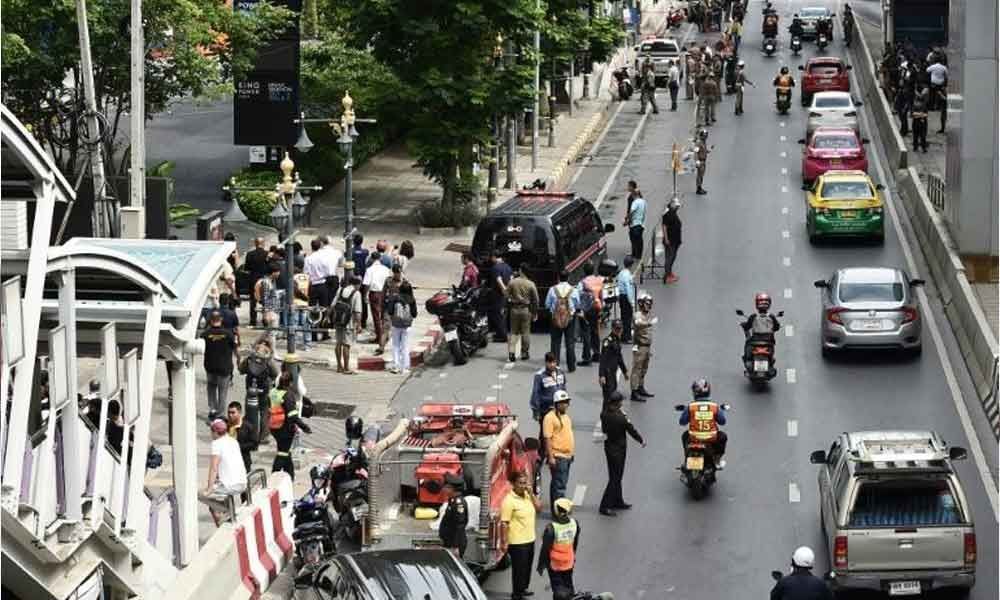 Footage showed an explosion in a Thailand shopping mall minutes from the summit venue early hours of Friday morning.

BANGKOK: Footage emerged Saturday of the moment a bomb exploded in a Bangkok mall as the city hosted a major summit, the device apparently hidden inside a cuddly toy animal.

There were nine successful or attempted bomb blasts on Friday throughout Bangkok which left four wounded as the city hosted a regional summit attended by top diplomats, including US Secretary of State Mike Pompeo and Chinese Foreign Minister Wang Yi.

Footage showed an explosion in a shopping mall minutes from the summit venue in the early hours of Friday morning, after it was apparently planted by a man dressed in a student's uniform about 12 hours earlier.

The man, wearing a fedora and face mask, entered a store in Siam Square mall at around 3:30 pm on Thursday, according to time stamps on the footage obtained by AFP.

Milling around the store, he stopped at a shelf full of cuddly toy seals and polar bears and fiddled with one of them for a few seconds before placing it back on the shelf.

The next video recordings showed an explosion in the store originating from the shelf around 4:45 am on Friday morning, which caused a fire and a swirl of smoke as the store's sprinkler system was activated.

No one was injured and police confirmed the bomb blast.

"The staff from the...store filed a complaint with the police about the blast yesterday," Colonel Thammanoon Boonruang told AFP Saturday, declining to comment on whether it was one of the nine explosions authorities confirmed.

The store remained closed on Saturday.

Speculation swirled in Thailand about the motive behind the bombings, with many linking them to retaliation from the insurgency-hit south for the recent arrest of a rebel suspect who was left in a coma after arriving at a notorious army camp.

A preliminary army-led probe showed that Abdullah Esormusor, 34, could have been suffocated.

Thailand has a grim history of political violence and remains deeply divided after a controversial March election which returned junta chief Prayut Chan-O-Cha to power as a civilian premier.

Its three southernmost provinces bordering Malaysia, which are predominantly Muslim-Malay, are also in a grip of a 15-year conflict, where a shadowy rebel group has agitated for more autonomy outside of the Buddhist-majority Thai state.

So far, two men linked to the conflict-hit region were arrested hours after wires and ball bearings were found in an inactive device outside Thai police headquarters late Thursday.

But police said it was "too early" to clearly tie them to the rebellion.