US Secretary of State meets Khalilzad on Afghan peace 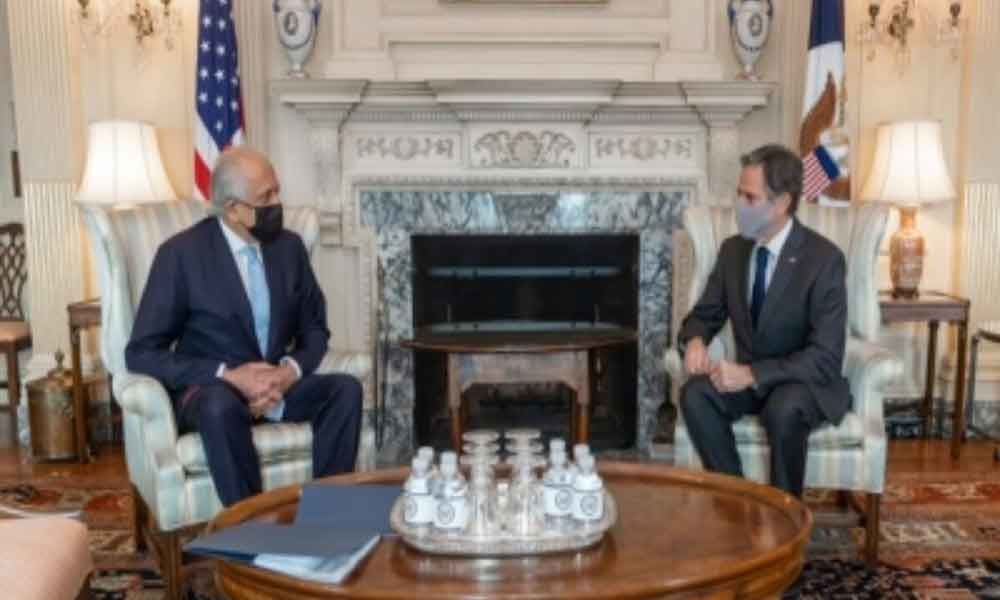 US Secretary of State meets Khalilzad on Afghan peace

US Secretary of State Antony Blinken met Zalmay Khalilzad, Washington's special envoy for Afghanistan reconciliation, during which they "discussed the way forward" for long-lasting peace in the war-torn country.

Washington: US Secretary of State Antony Blinken met Zalmay Khalilzad, Washington's special envoy for Afghanistan reconciliation, during which they "discussed the way forward" for long-lasting peace in the war-torn country.

Taking to Twitter following the meeting here on Thursday, Blinken said: "Great meeting with Ambassador Khalilzad to discuss the way forward in Afghanistan... Continuing to protect the US against the threat of terrorism, achieving a just and durable political settlement there, and cementing a permanent and comprehensive ceasefire."

Also in a separate tweet, Khalilzad, who has negotiated with the Taliban for 18 months to reach an agreement, said that during the meeting, he "had the opportunity to brief Blinken on the Afghanistan peace process in the context of our continuing policy review".

Thursday's development came as no meeting has been held between the Afghan Republic and the Taliban negotiators in Doha over the last 19 days after talks resumed between the two sides on January 5 following a break.

The Afghan peace talks, which started on September 12, 2020, following the US-Taliban peace deal inked last February to end the war, paving the way for the withdrawal of thousands of US forces in Afghanistan and facilitate the intra-Afghan dialogue, has made little progress to achieve the goal.

"The Taliban have not met their commitments. Without them meeting their commitments to renounce terrorism and to stop the violent attacks on the Afghan National Security Forces, and by dint of that the Afghan people, it's very hard to see a specific way forward for the negotiated settlement," he said at the briefing on January 28.

In response, a Taliban spokesman Mohammad Naeem told an Afghan media outlet that the group remained committed to the agreement "and we call on the other side to stay firm on its commitments".

The war in Afghanistan, which has caused about 2,400 US military deaths, is the longest one in American history.

Former President Donald Trump had sought a full withdrawal of forces from the country, but some of his senior aides from the military and the Pentagon suggested a more cautious approach.

Currently there are about 2,500 US troops in Afghanistan.