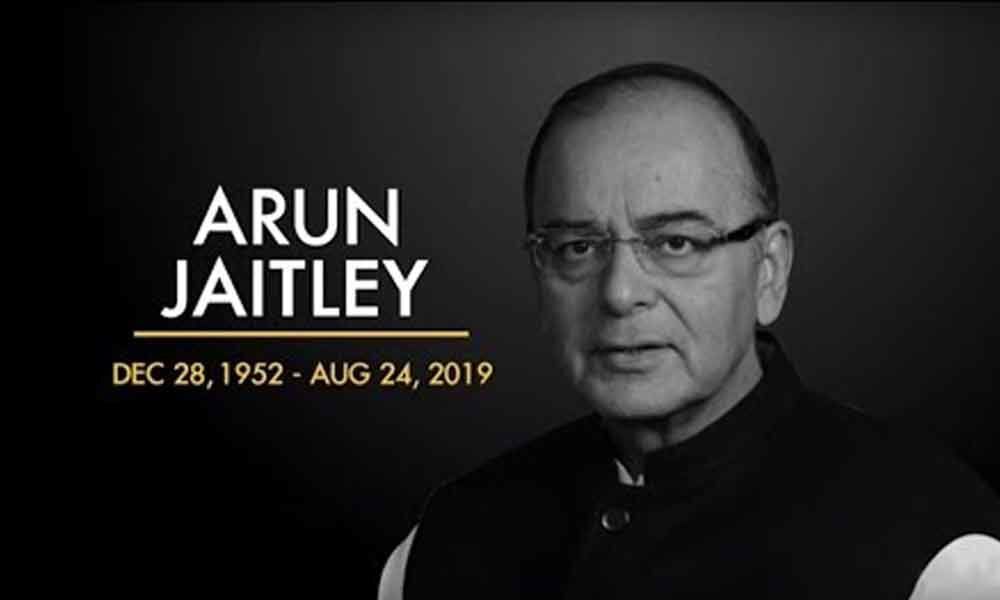 New Delhi: Former Union finance minister Arun Jaitley, a key strategist and chief trouble-shooter of the BJP and Narendra Modi government during its first term, died on Saturday at the AIIMS here after battling multiple health issues for the last several months. He was 66.

In a brief statement, the hospital said Jaitley breathed his last at 12.07 pm. He was admitted to the hospital on August 9.

The urbane and media-savvy leader was one of the sharpest political minds not only within the BJP but also in the larger political spectrum where he made lifelong allies cutting across the ideological divide.

He was perhaps among the BJP bigwigs who made a smooth transition from the Atal-Advani era in the party to the one where Narendra Modi dominated, ushering in the rise of a new generation leaders.

As soon as his death was reported, leaders cutting across party lines paid rich tributes with Prime Minister Modi calling him a "valued friend". Modi is currently in the UAE as part of his three-nation tour.

Several top leaders paid homage to Jaitley, with Congress chief Sonia Gandhi saying his contributions to public life will be remembered forever. Jaitley had undergone a renal transplant on May 14 last year at AIIMS, and his health condition gradually worsened, forcing him to take frequent breaks from his work.

He opted out of the second term of the BJP-led NDA government as Modi led the saffron party to a landslide win in May this year. A lawyer by profession, he was a key member of the first Modi government.

He held the finance and defence portfolios, and often acted as the chief troubleshooter of the government. Jaitley, who had lost the 2014 general election did not contest the 2019 Lok Sabha polls, because of his ill-health.

He was serving his fourth straight term in Rajya Sabha, where he entered in 2000 and went on to become the Leader of the Opposition and then the House as the BJP came to power in 2014.

Jaitley, who had stopped attending office since early April last year, was back in the Finance ministry on August 23, 2018.

In September 2014, he had undergone bariatric surgery to shed weight he had gained because of a chronic diabetic condition. Jaitley's mortal remains will be kept at his residence on Saturday night.

From where, they will be taken to the BJP headquarters on Sunday, where they will be kept from 11 am to 2 pm. His final rites will take place on Sunday at Nigambodh Ghat in the evening.