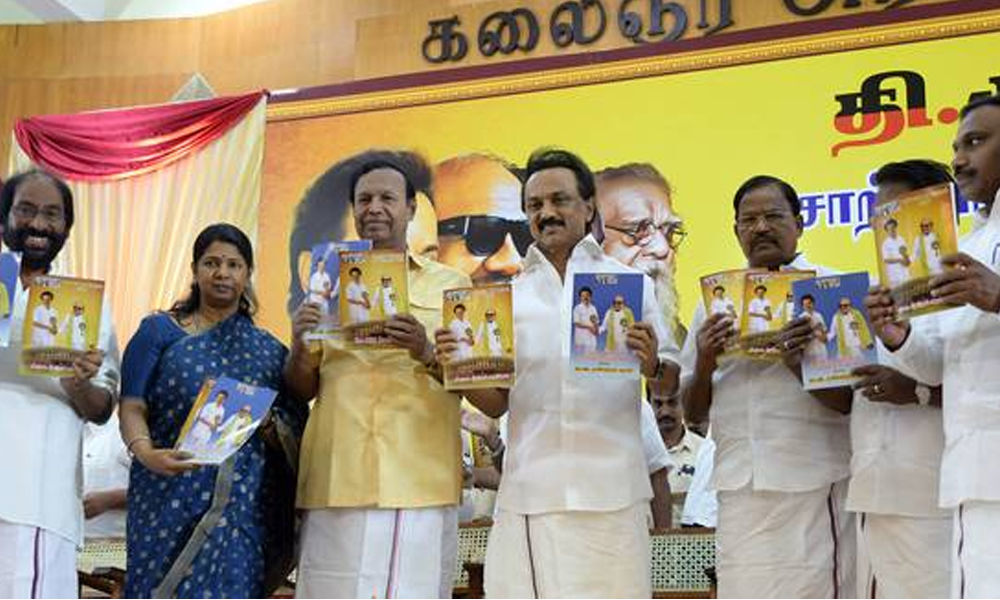 The party promises to restore the hampered Sethusamudram project and also release the convicts of the Rajiv assassination case.

TAMIL NADU: On Tuesday, the DMK party president M K Stalin, had released its manifesto for the Lok-Sabha elections. In its manifesto the party has promised to waive all farm loans which have been taken by small and marginal farmers and also the education loans availed by students. It has sought to increase the exemption limit of income tax from Rs 5 lakh to Rs 8 lakh, and Rs 10 lakh for women and the differently abled.

"Through this manifesto, DMK is promising that very soon we will have a secular government at the Centre. For the first time, we sought suggestions from people through online and many farmer associations also gave their suggestions," said Stalin.

The manifesto of DMK had also promised to implement old pension scheme for the employees of the state government and price mechanism to be administered for fuel prices. Instead of LPG subsidy being deposited in the bank account of the consumer, it shall be e priced as per the old system.

"Each woman in a family living below the poverty line will be given ₹50,000 interest free loan to start small businesses. School and college students will be given free ride in trains and cities like Madurai, Trichy, Coimbatore and Salem will get metro train services," said the manifesto.

As a part of the corporate social responsibility, 50 lakh employment opportunities will be given to the people in private companies at ₹10,000 per month and the number of working days under the MGNREGS will be increased to 150 days. "The DMK will strive to pass the women reservation bill in Parliament without any delay. The party will also impress upon the Centre to legislate a law to provide necessary relief to widows," said the manifesto.

In all central government offices functioning in the state of Tamil Nadu, the party had promised to make Tamil a co-official language and as per the 1964 Indo-Sri Lanka consensus, the party will be providing Indian citizenship to Sri Lankan refugees living in camps. The party promises to restore the hampered Sethusamudram project and also release the convicts of the Rajiv assassination case.

Each year a separate Union budget for agriculture will be released and a special committee comprised of economic experts will be constituted to revive the Indian economy.

To meet the natural calamities in the country, the manifesto had also promised to set aside 0.5% of the Union budget funds.