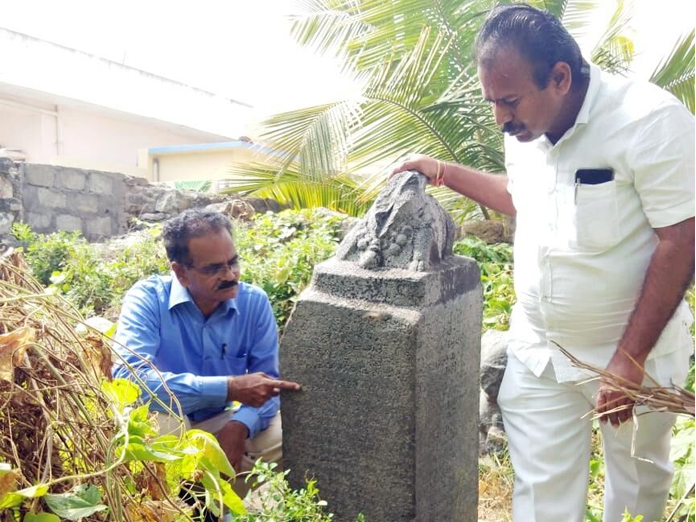 Vijayawada: A 12th century AD inscription pillar surrounded by houses at Timmapuram village of Yadlapadu mandal in Guntur district is crying for protection. Archaeologist and CEO of the Cultural Centre of Vijayawada & Amaravati Dr E Sivanagi Reddy visited the inscription site on Thursday.

He said that the inscription was dated back to 1161 AD, issued by Saranaya brother of Kamidevi, wife of Kulothunga Choda Gonkaraju of the Velanati chiefdom ruled from Chandolu near Bapatla in the same district which records the installation of Gonkeswara Linga in Timmapuram known as Jevaram at that time and donated lands and an oil mill to a few Brahmins for conducting the daily rituals and maintaining a perpetual lamp.

Dr Reddy lamented over the sad state of its preservation, which is losing its very existence because it is camouflaged by houses on all the sides sans any access to approach by research scholars.

He said that the 5 foot high original inscription pillar was seen only up to 2 feet above ground level and half of the inscription was illegible as it sunk into the ground and covered with thickly grown bushes and creepers.

Dr Reddy appealed the officials the Dept of Archaeology and Museums to safeguard the historically significant inscription by shifting it to a local temple and erect it on a pedestal.

B Rama Krishna, president of Bharatiya Ayurveda Itihasa Parishad of the same village participated in the visit, said Sivanagi Reddy.