What's it like to drive New Audi R8 V10 Plus 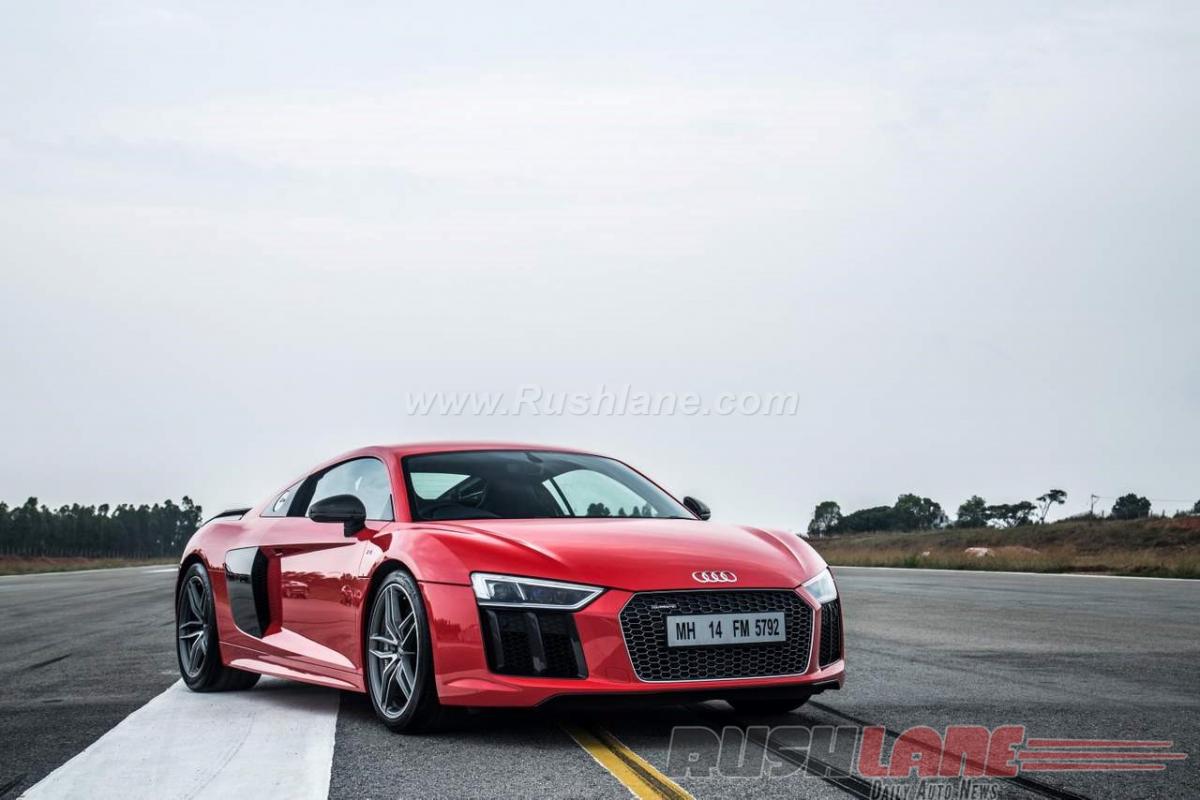 A secluded runway and a set of high-performance Audis always make for riot of a day.Though Audi was the last of the German trio to enter India, the brand

A secluded runway and a set of high-performance Audis always make for riot of a day.Though Audi was the last of the German trio to enter India, the brand caught up with its rivals fairly quickly, thanks to its comprehensive portfolio and readiness to explore the unchartered segments of the nation’s luxury car market. Audi India’s current lineup comprises SUVs, sedans and sportscars of all shapes and sizes to suit a wide range of audience.

We recently had a rare chance of meeting the brand’s entire Indian portfolio at a secluded private runway near Hosur. Everything from the entry level A3, the deceptively quick RS6 Avant station wagon and the razor sharp R8 V10 Plus supercar were on the platter. This is how the day shaped up.

Well, it’s more like tasting shots than a platter. We got to do flat-out runs for about a kilometre down the straight stretch of the runway in any of the two sportscars.

Audi India’s sportscar fleet comprises the compact TT Coupe, aging S5, wolf-in-the-sheep’s-clothing RS6 Avant and stunning RS7. Selecting any two out of these four was an extremely difficult task but it was made simple by other drivers who promptly stuffed themselves into the available pair of RS6 Avants, and a TT. So, it was the RS7 and S5 for me then.

The acceleration run on Audi’s sportcars down the air strip was massive fun. The RS7 is a real nightmare for most of the supercars out there.
The RS7 with its 4.0-litre TFSI V8 turbo petrol engine is a sedan which can keep pace with several popular supercars without breaking a sweat. The runway was a right setting to set the 560-strong cavalry loose. The car lunged forward like a ferocious predator and kept building up momentum at an alarming rate. Thanks to the Quattro system’s ability to make the most out of the colossal torque of 700 Nm that is available between 1,500 – 5,500 rpm, 100 kmph came and went in a blink of an eye and the RS7 was already on the wrong side of 200 kmph before my feeble mind could fully fathom the serious nature of its acceleration. I have to admit that I chickened out and let go of the throttle several yards before the braking mark but I swear I saw 247 kmph on the HUD!

The S5 in comparison is not as scary but is properly quick nevertheless. The oldest of the performance Audis is powered by a 3.0-litre TFSI V6 turbo petrol engine which is mated to a 6-speed DSG and Quattro to belt out 333 PS and 325 Nm of torque. The motor has a glorious sound track and the performance to go with it. 230 kmph at the braking mark was achieved without any serious effort. Audi is just a few days from world premiering the new A5 which means the next iteration of the S5 with vast aesthetic and technological advancements is only a few months away.

Our A6 just soaked up the bumps in comfort mode, thanks to the adaptive air suspension system.
The A drive involved a round trip of around 25 km from the runway to a pond through twisty and broken stretch of tarmac. This sector was aimed at demonstrating the sedan family’s ability to cope up with Indian roads without compromising on comfort. Our steed for this assignment was the A6 diesel. With the Audi Drive Select system (incorporates adaptive air suspension) in comfort mode, the A6 sedan simply glided over most surface imperfections.

Audi India drive experience (17)
Irrespective of their size and heft, all the Q models felt absolutely at home while traversing the challenging off-road course.
The Q family was subjected to a short off-road course which obviously was designed keeping the capabilities of vehicles in mind. That said, the entire course was quite challenging and all the Audi SUVs ranging from the compact Q3 all the way up to the Q7 traversed the adversities with aplomb.

New Audi R8 V10 Plus
The piece de resistance, of course, was the new Audi R8 V10 Plus whose sheer presence itself primes your adrenal glands. When the 610 PS 5.2-litre naturally aspirated V10 motor fires up and settles into a mean grumbling idle, the seriousness of what I’m about to undertake finally sank in and the child-like enthusiasm quickly transformed into nervousness! A strong urge to turn away and run almost overshadowed the anticipation of a thrilling acceleration.

Nothing prepares you for the brutal acceleratioon that the R8 V10 Plus is capable of.
The inner voice said, “Dude, it’s not every day you get to go flat out on a 3.2-second supercar. So, man up and get it done!” Moments later, I found myself strapped into the Audi’s most powerful road car ever, feeling glad that the balaclava and helmet concealed how nervous I was.

I fumbled with the seat adjustments, disengaged the electronic parking brake, slotted the gear selector into D/S and set the car in “Dynamic” drive mode. I decided to go for a rolling launch instead of relying on the launch control.

The traction offered by the Quattro system is simply amazing.
After holding the steering wheel firmly, the car felt absolutely planted even when it was standing still and this gave the much-needed courage to floor the throttle and keep it pinned down as long as possible. What ensued was a few seconds of mind-numbing acceleration which was so overwhelming that I had to fight off the urge to close my eyes! I honestly don’t know what happened in the first and second gears but by the time the third gear kicked in roughly 4 seconds after the launch, the car was already past 125 kmph mark, accelerating furiously towards the horizon, with its V10 motor bellowing at the top of its voice. The R8 V10 Plus shot past 200 kmph mark in about 10 seconds from the start (in 5th gear) and kept building up momentum relentlessly. I couldn’t get myself to take a quick glance at the speedo but I must have been doing a little over 250 kmph when I instinctively lifted off (several yards before entering the braking zone). The car’s carbon ceramic disc brakes did a scintillating job of shedding all that speed well ahead of the point where the tarmac gave way to a field of grass. That’s it! I just pushed a supercar beyond 250 kmph and emerged alive!

The whole episode lasted less than the time it took you to read the previous paragraph but the experience was so intense that I’ll be able to relive each and every second of it for several years to come!