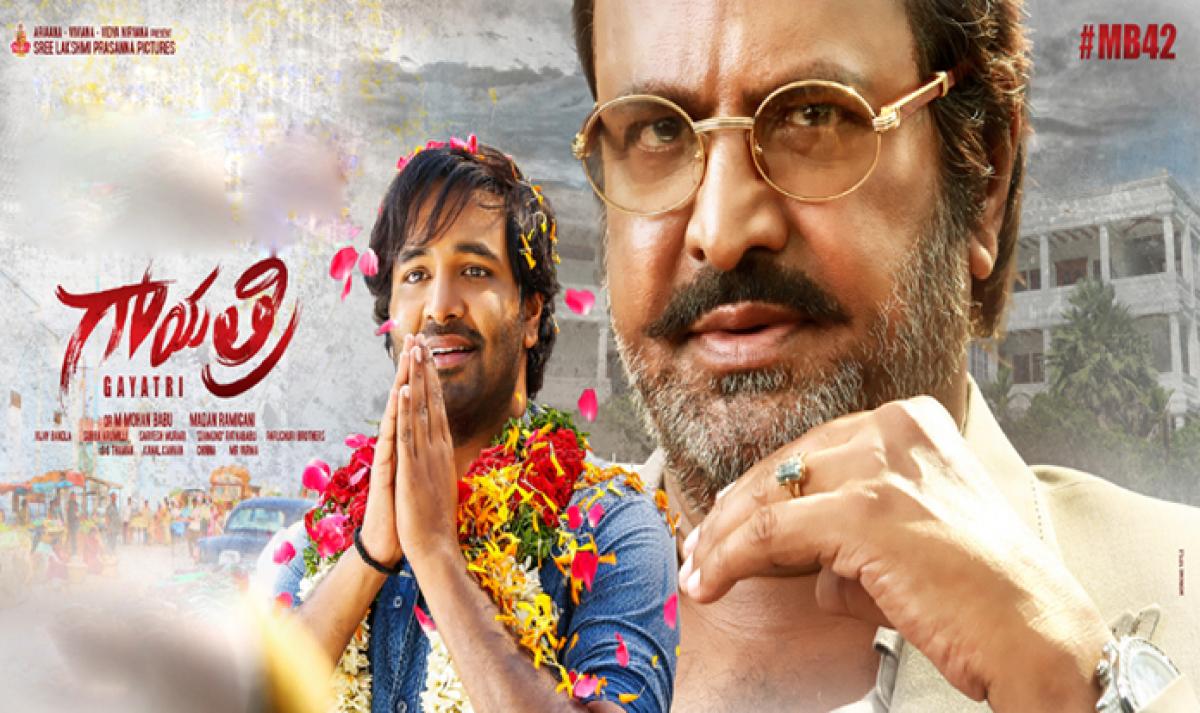 Manchu Mohan Babu is a veteran actor who has portrayed variant roles. But, in the recent times, Mohan Babu has not got any decent hit.

Manchu Mohan Babu is a veteran actor who has portrayed variant roles. But, in the recent times, Mohan Babu has not got any decent hit.

Vishnu Manchu and Shriya Saran in the lead roles, expected to be a comeback one for Mohan Babu, the movie 'Gayatri' hit the theatres today. Here is the full review of Gayatri.

Dasari Shivaji (Mohan Babu) is a theatre artist who performs variant roles. After his wife Sharadha's (Shriya Saran) death, his daughter Gayatri (Vimala)is parted from him in her childhood itself that resulted in him leaving all alone in life.

Dasari earns money by going to jail on someone's behalf and helps the orphans with the money he makes. A sudden incident changes Dasari's entire life. What is that incident, how he gets out from it is to be watched in the theatres only?

Mohan Babu appears in two different roles majorly. Need not even mention about Mohan Babu's dialogue delivery. It seems like Mohan Babu is back with a bang with Gayatri. Vishnu has performed well.

The chemistry and the romance between Vishnu and Shriya Saran are well portrayed. Comedians Brahmanandam and Ali are utilised only up to a limited extent. Anasuya impresses as a journalist. To be frank, Mohan Babu dominates everyone else.

SS Thaman's music is a mere mediocre thing which is sometimes in sync with the story. Dialogues and punches are well written and executed. Comedy is not good at all. Sound editing and camera work are plus points.

Production values are good. The camera work has been a significant plus point for the film. The songs were captured nicely. The editing is good. Technically, the film is strong.

Though the main story plot is not a new concept, the introduction of Gayatri Patel's role brings a modern twist. A little slow paced narration until Gayatri Patel enters. The first half is dragged. Flashback in the second half is good. The screenplay is well woven. This movie would have been better if the narration were not dragged. Compared to the second half of the movie, the first half lacks content.

The makers tried to tell too many things in the second half of the film and it resulted in everything being wrapped hurriedly. Compared to the other release this weekend, Gayatri is surely a film that will save the audiences.