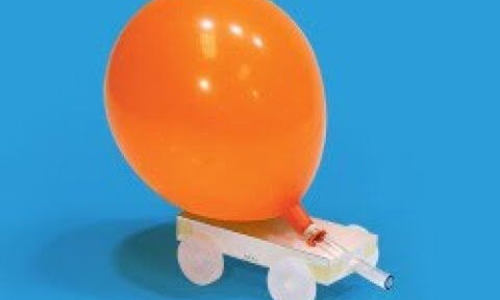 This is a very simple rocket that demonstrates the most basic principle of rocketry how pressurized gas creates thrust What You Do Tie one end of the...

This is a very simple rocket that demonstrates the most basic principle of rocketry: how pressurized gas creates thrust What You Do: Tie one end of the string to a chair or doorknob across the room from you. Blow up a round balloon a couple of times to get it stretched out. Then blow it up and pinch the end closed so no air can escape. Holding the inflated balloon closed, have an assistant help you tape a straw to it. Thread the straw onto the free end of the string. Hold the string taut and then let go of the balloon.

What Happened:The air in the balloon is gas under pressure. The air pushes against the balloon, causing it to expand, but the balloon is also pushing back on the air. When gas or liquid is under pressure, it tries to escape. In the case of the balloon, it escapes out the open end. In a rocket, it escapes through an opening called a nozzle. As the gas escapes, it creates the thrust that propels your rocket forward (or a real rocket upward). This is because of one of Newton’s Laws of Motion: for every action, like gas escaping from a rocket in one direction, there is an equal and opposite reaction, like the rocket moving in the other direction.

To do some more experimenting with your simple balloon rocket, test how far it will go with different amounts of air: full, half full, a quarter full, etc. (You can measure the actual volume of air inside the balloon by using a flexible tape measure to measure the circumference of the balloon. Use the circumference to find the diameter: just divide the circumference by π (3.14). Next find the volume with the following equation: Volume = 1/6π(Diameter) 3. After several tests, make a graph to show the relationship between the balloon’s volume and the distance it travels.)

Another experiment idea is to see if you can design a way to control the flow of air through the ‘nozzle’ —if the air comes out too slowly there won’t be enough force to move the rocket forward, but if it escapes too quickly the rocket won’t go very far. Finally, try using different types of string for your balloon rocket to travel along. Do you think the balloon will travel the same distance along yarn as along fishing line? Why or why not? (Hint: friction!)

Rockets heading to outer space need a lot of energy to escape the pull of the earth’s gravity! Instead of a single rocket trying to do all the work, aerospace engineers build rockets that perform in stages. As the first rocket stage burns itself out, another one takes over. Try this NASA project to make a two-stage balloon rocket.