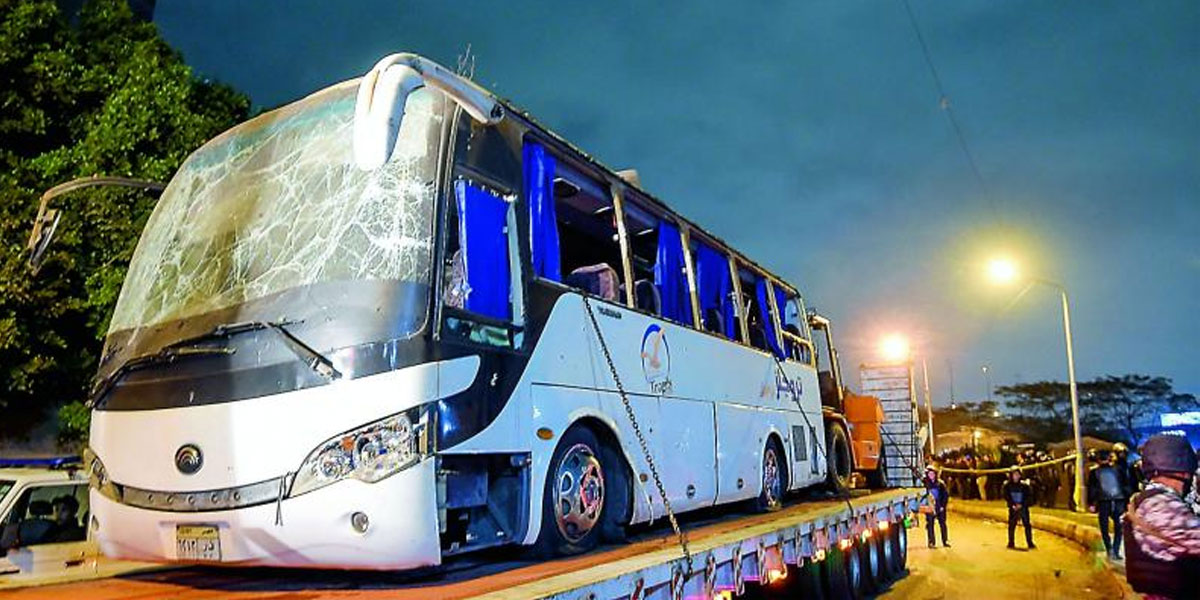 Giza (Egypt): Egyptian police killed 40 alleged ‘terrorists’ in a crackdown on Saturday after a roadside bomb hit a tour bus claiming the lives of three Vietnamese holidaymakers and an Egyptian guide.

The suspects were killed in separate raids in the Giza governorate, home to Egypt's famed pyramids and the scene of Friday's deadly bombing, and in the restive Sinai Peninsula, the interior ministry said.

Two raids in the Giza governorate killed 30 ‘terrorists,’ while the remaining 10 were killed in the North Sinai, the ministry said in a statement. It said authorities acted after receiving information the suspects were preparing a spate of attacks against state and tourist institutions and churches.

“Information was received by the national security that a group of terrorists were planning to carry out a series of aggressive attacks targeting state institutions, particularly economic ones, as well as tourism, armed forces, police and Christian places of worship,” the statement said.

Early on Friday evening, a roadside bomb hit a tour bus in the Al-Haram district near the Giza pyramids, killing the three Vietnamese holidaymakers and their Egyptian guide, officials said.

A statement from the public prosecutor's office said 11 other tourists from Vietnam and an Egyptian bus driver were wounded. There was no immediate claim of responsibility for the bombing, the first attack to target tourists since 2017. Saigon Tourist, the tour company that organised the trip, said the Vietnamese tourists were “on their way to a restaurant for dinner” when the bomb exploded.

Company officials were heading to Cairo on Saturday and plans were made to allow some relatives of the victims to also fly to Egypt.

One of those heading to Cairo was Nguyen Nguyen Vu whose sister Nguyen Thuy Quynh, 56, died in the bombing, while her husband, Le Duc Minh, was wounded.

The couple, both aged 56, were in the seafood business and holidaying in Egypt when the tragedy occurred, Quynh's younger brother said.

“We were all very shocked... My sister and her husband travel quite a lot and they are quite experienced in travelling abroad. Their hobby is travelling,” Vu said.

He said he was applying for a visa for Egypt and hoped to travel on Saturday. “Our wish is that we could bring my sister back home, and I hope that I can settle things well in the next 2-3 days.”

Friday's deadly bombing was the latest blow to Egypt's vital tourism industry, which has been reeling from turmoil set off by the 2011 uprising that forced veteran president Hosni Mubarak from power.

Egypt has been seeking to lure tourists back by touting new archaeological discoveries and bolstering security around archaeological sites and in airports.
It is also planning to open a major museum near the Giza pyramids – the only surviving structures of the seven wonders of the ancient world. In July 2017, two German tourists were stabbed to death by a suspected jihadist at the Red Sea resort of Hurghada.

In October 2015, a bomb claimed by a local affiliate of the Islamic State group killed 224 people on board a passenger jet carrying Russian tourists home from the Sinai peninsula.

While tourism has picked up since 2011, the 8.2 million people who visited Egypt in 2017 are still a far cry from the 14.7 million who visited in the year before the uprising.

The blast and the subsequent police raids come as Egypt battles a persistent jihadist insurgency in the North Sinai, which surged after the 2013 overthrow by the army of Mubarak's Islamist successor Mohamed Morsi.

Jihadists linked to the Islamic State group have claimed responsibility for previous attacks, including against Egypt's Coptic Christian minority who make up about 10 percent of the population.

Army launched a large-scale operation dubbed “Sinai 2018” in February to rid the Sinai of jihadists after an attack on a mosque in the north of the peninsula killed more than 300 people.