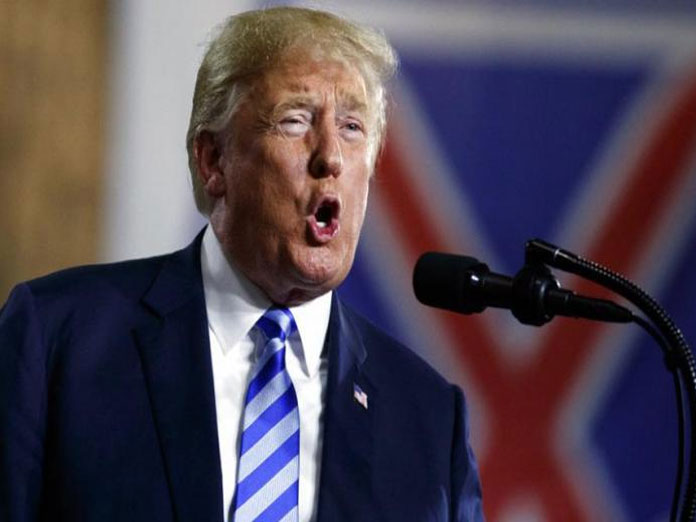 Seeking to end the federal government shutdown, US President Donald Trump has offered extending protection for people illegally brought to the country as children in exchange for USD 57 billion for constructing a wall on the USMexico border

The shutdown, the longest in US history entered its 29th day.

Washington: Seeking to end the federal government shutdown, US President Donald Trump has offered extending protection for people illegally brought to the country as children in exchange for USD 5.7 billion for constructing a wall on the US-Mexico border.

The deal was, however, dismissed by the Democrats as a "non-starter". The president also proposed a slew of measures to increase border security, including an increase in law enforcement, saying he was offering a "commonsense compromise both parties (Republicans and Democrats) should embrace."

The divide between the Trump-led Republican Party and the Democratic Party led by House Speaker Nancy Pelosi over the border wall led to the shutdown, which has rendered 800,000 federal government workers without work and crippled key departments.

The shutdown-- the longest in US history-- entered its 29th day, as Trump Saturday made the announcements. The president has also proposed protection to other groups of immigrants facing deportation. "Both sides in Washington must simply come together," Trump said in a White House speech, adding he is trying to “break the logjam."

“It is time to reclaim our future from the extreme voices who fear compromise and demand open borders, which means drugs pouring in, human trafficking and a lot of crime," he said.

Trump said he is here today to "break the logjam" and provide Congress with a path forward to end the shutdown and solve the crisis on the border. Defending his plan for the border wall, he said, "The radical left can never control our borders. Walls are not immoral in fact they are the opposite of immoral because they will save many lives.

The president said he would give protection for young people brought to the country illegally as children -- also known as 'Dreamers' -- and also extend it to those with temporary protected status after fleeing countries affected by natural disasters or violence.

Trump said he proposes "three years of legislative relief for 700,000 DACA recipients brought here unlawfully by their parents at a young age many years ago". This extension will give them access to work permits, social security numbers and protection from deportation, he said. The Deferred Action for Childhood Arrivals (DACA) allows such people to receive a renewable two-year period of deferred action from deportation and become eligible for work permit.

“Our proposal provides a three-year extension of Temporary Protected Status. This means, 300,000 immigrants whose protected status is facing expiration will now have three more years of certainty so that Congress can work on a larger immigration deal, which everybody wants -- Republicans and Democrats," Trump said.

He said farmers and vineyards will not be affected because lawful and regulated entry into the country will be easy and consistent. The president pushed for the USD 5.7 billion to fund the "strategic deployment" of a barrier system or wall on US's southern border, saying this is not a 2,000-mile concrete structure from sea to sea.

"These are steel barriers in high priority locations" and much of the border is already protected by mountains and water, Trump said. In his proposal to end the shutdown, he proposed USD 800 million in humanitarian assistance, medical support, and new temporary housing; USD 805 million for technology, canines, and personnel to help stop the flow of illegal drugs, weapons and other contraband; and USD 782 million to hire an additional 2,750 border agents, law enforcement officers and staff.

If we are successful in this effort, then we can start the broader project of remaking our immigration system for the 21st century,” he said. Once the government is open, Trump said he will hold weekly bipartisan meetings to reform the immigration system.

The divide between the Republicans and Democrats, and the shutdown are fallouts of Trump refusing to sign spending bills without the USD5.7 billion to start constructing the border wall. The Democrats appeared unimpressed by his proposal and dismissed it.

“The president has taken pride in shutting down government. Now, he must take action to open up government,” Pelosi said. Trump's proposal is a compilation of several previously rejected initiatives, each of which is unacceptable and in total, do not represent a good faith effort to restore certainty to people's lives, she said.

“It is unlikely that any one of these provisions alone would pass the House, and taken together, they are a non-starter. For one thing, this proposal does not include the permanent solution for the Dreamers and TPS recipients that our country needs and supports,” Pelosi said.

Senate Minority Leader Senator Chuck Schumer said it's clear the president realizes that by closing the government and hurting so many American workers and their families, he has put himself and the country in an untenable position Trump's remarks failed to acknowledge the pain and suffering he has caused to federal workers, contractors, and millions of US citizens, Democratic senators Mark R Warner and Tim Kaine said.