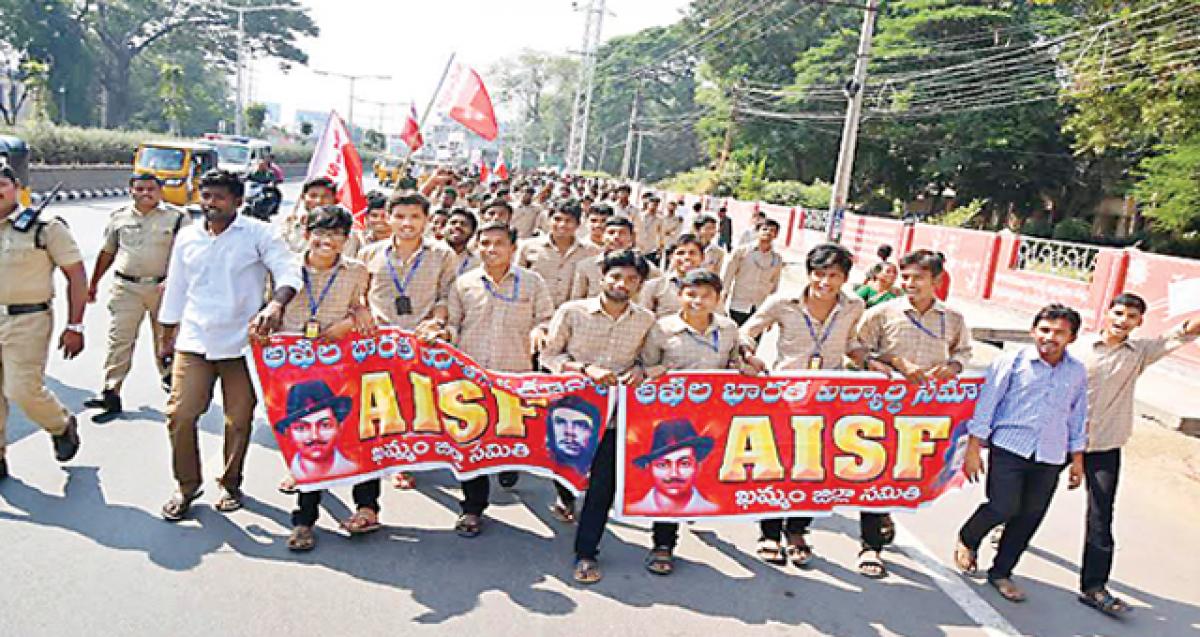 Addressing the students, B Mallayya Yadav, Telugu Desam Party State Secretary criticised the TRS government for not releasing the fee dues, while...

Kodad/Khammam: Members of the Telugu Nadu Students’ Federation (TNSF) from various colleges on Thursday took out a huge rally in the town, after forming a human chain, demanding immediate release of the fee dues.

Addressing the students, B Mallayya Yadav, Telugu Desam Party State Secretary criticised the TRS government for not releasing the fee dues, while making available funds for building new camp office for the Chief Minister in the heart of Hyderabad and for celebrating festivals like Bathukamma.

Speaking to The Hans India, Yadav threatened to lay siege to the State Assembly if the administration failed to release the fee dues. He accused the government of being blind to the problems of people, students and farmers.

The TDP leader alleged that Chief Minister K Chandrashekar Rao was leading a luxurious life ignoring the
problems of various sections of the society.

Meanwhile in Khammam, The representatives of All India Students Federation (AISF) staged a dharna demanding the government to release fee dues and scholarships which were pending, here at Dharna Chowk in front of collectorate in Khammam on Thursday.

Earlier in the morning, a massive rally was held by the representatives of AISF along with the students of various educational institutions from Old CPI office to Collectorate through Wyra road.

Speaking on the occasion, District Secretary of AISF Jagarlamudi Ranjith Kumar said out of Rs 2,078 crore, the government has released only 252 crore as scholarships which would not be in anyway sufficient to all the students across the State.

He alleged that Chief Minister K Chandrashekar Rao was investing crores of rupees for constructing his Camp Office and in unnecessary projects and schemes. But to release the pending scholarships, he was denying funds.

Separate statehood was achieved only due the sacrifices of many students. However, after he became CM, KCR is neglecting them and not showing any interest to solve their problems, he criticised.

He demanded that government release the remaining amount of fee dues immediately which were pending, apart from providing all facilities in the government schools and colleges by strengthening the education system in the State. He also urged the government to establish a university in Khammam for the students to go for higher studies.

Inter student ends life in Hyderabad after being caught with...